Mette Frederiksen, Prime Minister of Denmark, addressed the media after the first day of the October European Council. [European Union]

The new Commission president has made the fight for equality one of her main priorities. Asking member states to provide two names – female and male – for her college of Commissioners was the first step.

Although von der Leyen failed to achieve the goal, as some EU countries did not heed her call, 12 out of the 27 members of the new college are women. On Wednesday (27 November), she took a further step, vowing before the Parliament that her Commissioners would have gender-balanced cabinets as well.

An – almost – parity Commission, however, does not reflect the reality for female political representatives in Europe. Although the situation has certainly improved in the past ten years, it is far from ideal.

The Council of European Municipalities and Regions (CEMR) has looked at how well women are doing in politics across the bloc. At the current rate, the report highlights, it will take 107 years to close the gender gap in politics.

Looking at the different political groups, the Greens are the only family where there are actually more women than men (52,7%), while the leadership is gender-balanced as Ska Keller (Germany) and Philippe Lamberts (Belgium) co-chair the group.

However, in the last 40 years, only two women, both French nationals, chaired the EU chamber: Simone Veil (Liberal) back in 1979 and Nicole Fontaine (EPP) in 1999. 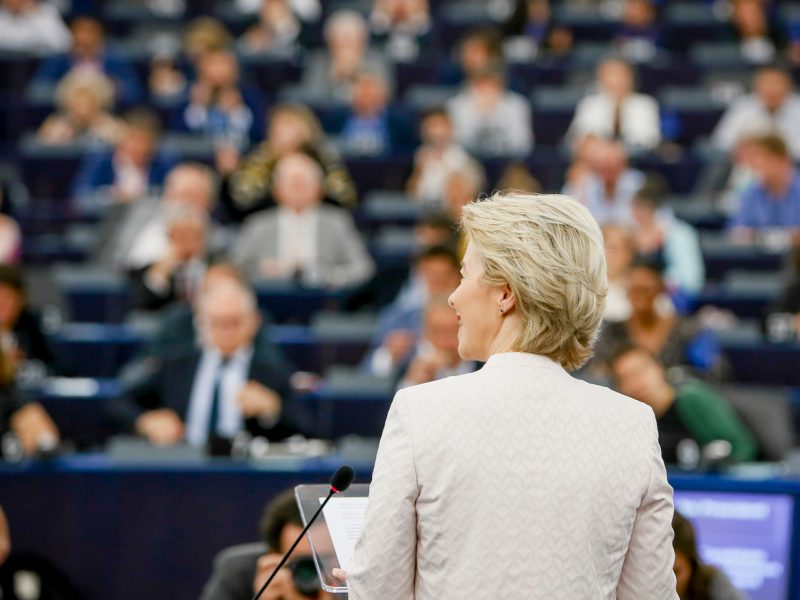 Way behind at local and national level

According to the available data gathered by the organisation, Iceland (46%), Sweden (44%) and France (40%) are the places with more women in politics. But none of them reaches parity.

The average in the EU remains much lower at 34.1%.

Looking at the figures at the local, regional and national level, the situation differs from country to country but Iceland remains the European champion of gender equality in politics.

In Europe, only 15% of mayors are women. There is a small improvement compared to ten years ago when 11% headed local administrations. Both Iceland and Sweden remain at the top, but Finland enters at the third place.

The average of locally elected women has slowly but steadily improved from 23.4% in 2008 to 29% this year. This average roughly corresponds to the proportion of women in national parliaments, 26.9%.

The first thing someone might notice when looking at any European Council family photo is that it shows a group of white, middle-aged men in dark suits.

Only four women are heads of state or government in the EU at the moment. The German Chancellor Angela Merkel, the Danish Prime Minister Mette Frederiksen, the Austrian chancellor Brigitte Bierlein, and the Belgian Prime Minister Sophie Wilmès are the only female leaders.

And Bierlein and Wilmès are only acting chairwomen until new governments are formed in their countries. Now that von der Leyen has been confirmed as Commission president, there will be one more woman in the picture.

Gender equality is far from being achieved in national politics indeed. Women in parliaments have increased their presence up to 28.5% in 2019, compared to 21.9% in 2008. But this means that not even one-third of political representatives are women.

The impediments for women’s participation are often structural, sociological and cultural, CEMR report highlights. Gender stereotypes, structural inequalities – which result in a bigger family burden for women – or even lack of self-confidence as derived from education, can be important factors.

Once in politics, women struggle more to finance their campaigns and often get less media space or, even worse, are the object of stereotypical or even misogynistic treatment that can eventually harm their visibility.

The rise of far-right parties in Europe, who are often defenders of the ‘traditional family’, has resulted in a backslide on women’s rights in many countries. Equality issues are being pushed off the political agenda or their mere existence is being questioned.

This backlash comes at a time where women are raising their voices against the abuse they have suffered for years, particularly thanks to the #metoo movement.

In Germany, according to a survey conducted by the Huffington Post, one in three female lawmakers have experienced sexual harassment. But MPs in France or the UK have also spoken up.

Quotas not a universal solution

Dozen of countries in the world have introduced quotas, either through legislation or internally among political parties. “The countries with quota requirements have experienced greater progress since 2008,” the study reveals.

However, as the barriers for women to access politics are very complex, quotas are not a panacea for solving the issue. “Quotas alone are not enough to overcome the inequalities between women and men in acceding to decision-making positions,” the text highlights.

In her mission letter to Helena Dalli,  the Commissioner for Equality, von der Leyen tasked her with developing a new European Gender Strategy “to address areas in which women still face additional barriers.” Politics seem to be one of those areas.

Today the Task Force for Equality met for the first time to develop its working methods for equality mainstreaming in all EU policies.

I thank the @EU_Commission Secretariat General, @EU_Justice and @EU_Social for all the work put into this important development. pic.twitter.com/CZ06KuOYpl