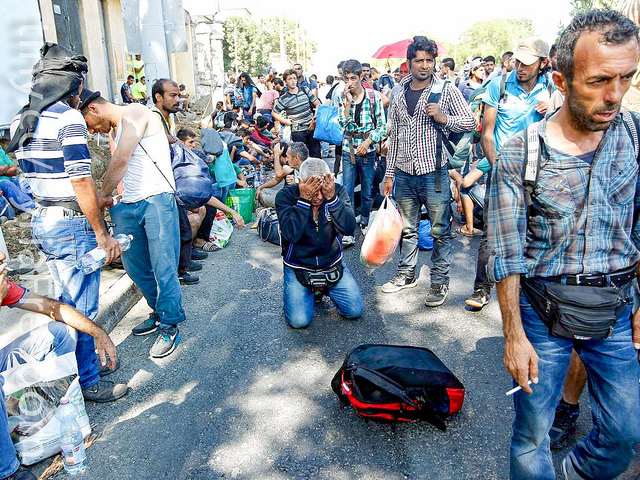 Refugees walk along Budaorsi Street, on their way out of Budapest. Hungary, 9 September. [Freedom House/Flickr]

EU ministers failed on Monday (14 September) to break a deadlock over sharing out responsibility for sheltering the hundreds of thousands of people who have sought asylum in Europe this year, leaving the shape of a final deal in doubt.

Determined opposition from a core of ex-Communist eastern states blocked efforts by Germany and France to secure agreement for a proposal by the EU executive to relocate 120,000 people from frontier countries according to mandatory national quotas.

After six hours of argument, ministers put off a decision, saying they hoped to agree on a deal to find places for the asylum-seekers at another meeting on 8 October.

Following a final legal endorsement of an earlier plan to relocate 40,000 people to countries that volunteer to take them, Hungary and Slovakia led resistance to pleas to accept a quota system for the larger new number. They argue that such schemes will draw more migrants and lead to further mass movements that threaten Europe’s open borders system.

With Europe’s 20-year-old Schengen passport-free zone creaking under the pressure, Austria and Slovakia said they would reinstate border controls to deal with the flow of people, following Germany’s move on Sunday. Poland said it was considering similar steps, while the Netherlands said it would have “more patrols” on its frontiers.

EU states can impose temporary controls for security reasons under the Schengen treaty, but there are fears the very ideal of a borderless Europe could collapse.

“We did not find the agreement we wanted,” EU Migration Commissioner Dimitris Avramopoulos told reporters. “The majority of member states are ready to move forward. But not all.”

The crisis is moving faster than the EU can handle, with more than 430,000 people having crossed the Mediterranean to Europe so far this year, 2,748 dying, and more coming every day.

Hungary has vowed to begin arresting illegal migrants starting today, with police fencing off a gap in the razor-wire barrier with Serbia that hardline Prime Minister Viktor Orbán’s government is racing to complete.

At the Roszke border crossing, several dozen migrants, including many children, were stuck on the Serbian side of the border, with several women crying, after police shut the border, AFP reported.

“We had heard the Hungarians were closing their border, but they told us it would be Tuesday,” cried Hassan, a Syrian in his thirties who was trying to reach Sweden.

Hungary is on the front line of Europe’s migrant crisis, with almost 200,000 people travelling up from Greece through the western Balkans and entering the country this year, most of them seeking to travel on to Germany.

The ministers did agree to increase manpower and resources protecting the external frontiers, as well as aid to the United Nations refugee agency, Turkey and other states sheltering millions of Syrians fleeing civil war.

More refugees should be transferred directly from the Middle East, officials said, sparing them life-threatening journeys and denying business to the people-smugglers who prey on them.

Ministers also agreed to finalise soon a list of “safe countries” whose citizens would not normally be entitled to asylum. But in a snub to Ankara, the EU presidency said Turkey would not be classified as “safe” for now due to its current military action against Kurdish militants.

The EU’s critics have seized on bitter divisions, notably between the wealthy west and poorer east, led by Hungary’s Prime Minister Viktor Orbán, whose government has fenced off its EU border with Serbia.

“The world is watching us,” Avramopoulos said. “It is time for everyone to take their responsibilities.”

Orbán has refused to take part in the larger relocation programme even though the EU executive’s proposal would have made Budapest a major beneficiary by taking 54,000 asylum-seekers off its hands, along with people from Italy and Greece.

European Council President Donald Tusk said on Friday he would summon EU leaders for an emergency summit if their ministers could not agree a solution. However, many governments question the value of such a meeting before interior ministers meet again for a regular council in Luxembourg on Oct. 8.

Hungary warned on Tuesday (15 September) that asylum seekers entering the European Union across its southern border with Serbia faced expulsion within days under a crackdown to confront Europe’s worst refugee crisis in two decades.

As tough, new border laws and powers to expel asylum seekers entered into force at midnight, Orbán’s right-wing government sealed off a railway track used by tens of thousands of refugees.

“We will start a new era,” government spokesman Zoltan Kovacs said shortly after midnight on the border. “We will stop the inflow of illegal migrants over our green borders.”

A major flashpoint in Europe’s worst refugee crisis since the Yugoslav wars of the 1990s, Hungary has vowed to control the flow through the Balkan peninsula to the richer countries of northern and western Europe.

Police have recorded over 190,000 entering Hungary this year, including a record for one day of more than 9,000 on Monday.

The government says refugees will still be able to claim asylum at official border crossings into Hungary, but if they have entered from Serbia – and not already sought asylum there – they face automatic expulsion within eight days after Budapest in July declared its impoverished southern neighbour ‘safe’ for refugees.

Commenting on the outcome of today's meeting of EU home affairs ministers on the refugee crisis, Greens/EFA co-president Philippe Lamberts said: "It is disheartening that, despite the ever more dramatic humanitarian crisis on the EU's southern borders, EU governments could only agree to prolong their internal squabbling until next month."

"Europe's crisis of solidarity is leading governments to scale back EU rights and freedoms, as we are seeing with the domino effect of reintroduced border controls. This is deeply worrying," he added.

Before the next meeting on 8 October, the EU Commission and Parliament must continue to pressure EU governments, he insisted. "It is also essential that the coalition of willing governments push ahead, as proposed by German chancellor Merkel and French president Hollande. Across the continent, EU citizens have shown they want to welcome asylum seekers. It is high time the politics caught up with its public."

0 responses to “EU fails to agree on migrant redistribution system”