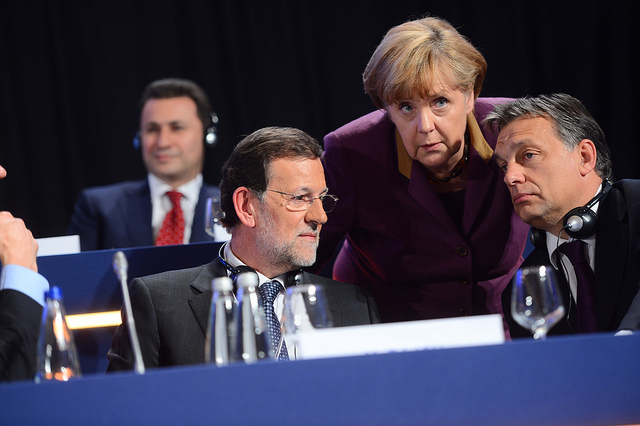 The Hungarian Prime Minister has demanded that Germany clarify its position on accepting Syrian refugees. During a visit to Brussels on Thursday (3 September), Orbán said that “there is a conflict between Hungary and Germany.”

Germany’s recent suspension of the Dublin system, in which they have allowed Syrian refugees to apply for asylum even if Germany was not their first point of contact in Europe, could have been seen as an “invitation” by refugees. “These errors in communication and invitations have created an impossible situation in Hungary,” he added.

Last week, the Federal Agency of Migration and Refugees (BAMF) announced that the Dublin system would be suspended just for Syrian refugees. According to the Dublin principles, refugees must apply for asylum in the EU state where they first arrived. Now that Germany has decided to suspend it, Syrian refugees will no longer be deported back to their point of first contact and will be allowed to apply for asylum in Germany.

Orbán said that he is still not sure what Germany’s objective is. As a result of the announcement, Syrian refugees may have refused to be registered in Hungary and to attend reception centres. “They call out the name of Germany and the name of Chancellor Merkel and say that they will wait in Germany.”

According to EU Law, Hungary cannot allow them to travel on. “If Germany has really invited them, then it should be Germany who should issue them with visas,” added the Hungarian PM. Then they would be allowed to leave Hungary. If the German government does not want to accept Syrians, then they must “make that clear”.

German Chancellor Angela Merkel responded to Orbán’s comments regarding Germany’s conduct in dealing with refugees.  “Germany is doing what is morally and legally necessary – no more, no less,” said Merkel on Thursday, in Switzerland.

“In Europe, we must have a very broad discussion about this,” she added. Hungary is actually in the right, in so much that it is legally obligated to protect Schengen’s external borders and to register refugees. “But obviously that is not enough.” It is the explicit obligation of EU states to help the vulnerable.

“The Geneva Convention is not just applicable in Germany, it is the same for every member state,” said Merkel, at an event at the University of Bern.

More than a thousand migrants in Hungary in an uncertain situation

After days of waiting in Hungary, thousands of refugees are stranded in limbo. On Thursday morning, the authorities allowed migrants to enter Budapest’s main railway station, Keleti. Subsequently, a few hundred people from the Middle East and Africa packed onto a train bound for Sopron, a town on the Austrian border.

The crowded train was then stopped by police in Bicske, 35 kilometers from Budapest, in order to take the migrants to a reception centre. However, the migrants demanded that they be allowed to continue their journey on to Germany.

An Austrian journalist, Florian Klenk, who was in Bicske, tweeted shocking images from the train of desperate people and babies sleeping in the luggage racks.

A high-ranking EU official confirmed that the Commission is discussing how to distribute more than 120,000 refugees throughout Europe. In addition to the 40,000 migrants that have already arrived, that makes a total of 160,000 people.

Despite the humanitarian crisis, a number of member states do not want to participate. Writing in Bild, the foreign ministers of Latvia, Lithuania and Slovakia reaffirmed their opposition to quotas.

Jean Asselborn, Luxembourg’s foreign minister, called for a Europeanisation of the asylum process. The European Asylum Support Office (EASO) in Malta should be expanded into a European authority for refugees, he told the Süddeutschen Zeitung.

This echoes Johannes Hahn’s insistence that a “pan-European response” is needed. The EU Commissioner for Enlargement and Neighbourhood Policy told euractiv.de that the crisis must be addressed at source, and that countries such as Turkey, Lebanon and Jordan should be helped in dealing with the influx of refugees, as it is they who are bearing the brunt of the problem.