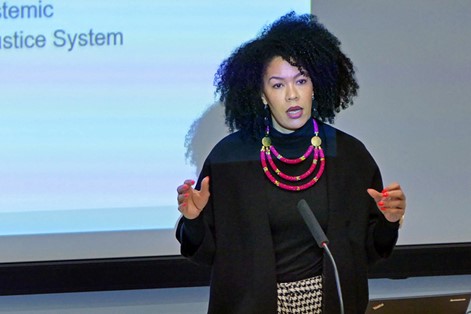 Michaela Moua is a former basketball player and Finnish justice ministry official. She was appointed the EU’s first anti-racism coordinator earlier in May.

In your new capacity, you’re responsible for liaising between people from ethnic or racial minorities and the European authorities. What is the goal to reach by the end of your term?

As anti-racism coordinator, it is my task to ensure the implementation of the Anti-racism Action plan. I will be in close contact with civil society organisations to learn about the concerns of people from a minority ethnic background and to pass on their concerns to the Commission. I will also engage with the member states, the European Parliament, and academia to strengthen policy responses in the field of anti-racism. Finally, I will join forces with other Commission services to implement the Commission’s policy on preventing and combating racism.

My aim is that by the end of my term we will have been able to effectively implement the EU anti-racism action plan. I want to create change on the ground.

When making policies, anti-racism has to be taken into account – I cannot emphasise this enough and I think that we need a real shift for this to happen. All member states need to adopt their respective national action plans against racism, and combating racism has to be a priority on their agendas. I will use my term to build a constructive, permanent mechanism with civil society organisations that continue to support the Commission’s anti-racism work.

The EU ‘action plan’ on racism calls for the collection of sound data on race and ethnicity, what could this look like?

With the EU Anti-racism action plan, the EU stepped up its game to fight anti-racism and to really turn the tide. One important basis to be able to do that is to have data on discrimination. We need to know where we stand. So collecting equality data broken down to racial or ethnic origin is crucial. Without measuring and quantifying the extent of discrimination and inequalities in Europe, it becomes very difficult to effectively tackle them.

In addition, accurate and comparable data is essential in making the scale and nature of discrimination suffered by marginalised groups visible. It also makes it possible to create effective and targeted policies. With good data, policymakers can better design, adapt, monitor and evaluate policies. Collecting data may sound technical and dry, but I can tell you: equality data is a powerful tool in the fight against racism, discrimination and exclusion.

Where are particular areas where you see member states lagging behind?

Ten platforms are already part of it and it has proven to be a robust tool. I encourage more online platforms to join this effort. In addition, the Commission is planning to extend the list of EU crimes to hate crime and hate speech.

Furthermore, the Digital Services Act proposed on 15 December last year will introduce a horizontal framework setting the obligations for online platforms to act diligently and ensure the safety and the respect of fundamental rights in the online space. All member states will have to comply with these new rules.

So, a lot is already happening and planned for the future but what really concerns me – and now I will come to the aspect of your question on where the member states are lagging behind – is that not all national criminal codes correctly criminalise hate speech and hate crimes.

Should there be more infringement procedures or sanctions against member countries that fail to implement measures?

The Commission has created rules but not all member states play by these rules. This is why we are making a huge effort to ensure all member states incorporate EU directives into their national laws, especially regarding the definition of hate speech or the criminalisation of hate crime. If dialogue and engagement with member states are not enough, we take legal action and launch infringement procedures which might lead to financial penalties.

There are currently seven infringement proceedings underway in member states to ensure that the criminalisation of hate speech, including when occurring online, as well as hate crime is correctly incorporated into the national law of the EU member states.

Many NGO’s criticise the EU’s fight against racism isn’t working. Should there be less focus on discrimination by individuals and more on the structures that perpetuate bias?

Racism should be tackled on all the different levels from the interpersonal to the structural because all levels are linked. I have been working for and with NGOs as well so I know their side. Their frustration stems from the focus of the work being on the end game of racism, meaning how racism affects the individual. However, it’s the root causes or structures that uphold and perpetuate these inequalities that we need to fix.

The Commission’s Anti-racism Action plan also recognizes the importance of fighting structural racism to achieve sustainable change. It recognizes that structural racism perpetuates the barriers placed in the way of citizens solely due to their racial or ethnic origin. Every day, people affected by racism can feel its impact when they are accessing jobs, healthcare, housing, financing or education. And of course, there are also cases of violence. Structural racism is the most dangerous form of racism, due to the silent mechanism in which it operates. It is almost invisible but at the same time affects a person’s access to equal opportunities.

After the George Floyd case, Europe has seen a renewed debate about police brutality. What can be done to help and incentivise member states fight those tendencies in their police forces?

There is no place for violence in Europe. And there is no place for racism in Europe. It is the duty of law enforcement authorities to protect citizens from violence and keep them safe. Whereas national authorities are competent for law enforcement matters, any use of force must always be exercised in a proportionate manner. If there are such incidents, they must be addressed swiftly, effectively, and in full respect for the rule of law and human rights.

It is important to remember that efficient policing and respect for fundamental rights are complementary. Through the high-level group on combating racism, xenophobia and other forms of intolerance, the Commission supports member states in preventing discriminatory attitudes within law enforcement. Special skills are necessary to investigate and prosecute hate crimes and victims need to be treated fairly and adequately.

How do you plan to address the discrimination threats of digitalization, especially when we think about the fact that facial recognition is already used in the public space in many member states? How worried are you that regulation is too slow to prevent negative effects?

The digital transition and development of new technologies can help strengthen the fight against racism. But, of course, we have to be careful because they can also bring new challenges to racial equality and non-discrimination and equality of opportunities more generally.

On 21 April, the Commission proposed new rules and actions regarding Artificial Intelligence (AI), including facial recognition. These rules underline that it is very important that AI systems do not create or reproduce bias. Rather, when properly designed and used, AI systems can contribute to the reduction of bias and existing structural discrimination. If we do it right, AI can actually lead to non-discriminatory decisions, for example in recruitment.

Under the new EU legislation, there will also be specific transparency rules regarding the automated recognition of gender, sexuality, race/ethnicity and disability. I trust that the comprehensive EU approach provides sufficient protection and that we will be able to benefit from the beneficial aspects of AI.

For long, there has been no reference to Europe’s past of slavery and colonisation. What path should the EU institutions take to address colonialism in their institutional communication?

We need to address our past, which certainly has been marked by inequalities along the way if we want to fight racism and reach our big goal of creating a Union of Equality.

Colonialism, slavery and the Holocaust are embedded in our history and have profound consequences for society today. We have to acknowledge these historical roots of racism if we want to address prejudices and stereotypes. Ensuring remembrance is an important part of encouraging inclusion and understanding: in my view, the EU should, for example, explicitly mark key commemorative days linked to racism, such as the International Day for the Abolition of Slavery, as proposed by the European Parliament. In July 2020, the Council of Europe adopted a recommendation calling for the inclusion of the history of Roma people and/or Travellers in school curricula and teaching materials.

There are also funding programmes with which we support projects that seek to remove barriers and that encourage the social inclusion and participation of underrepresented and disadvantaged groups. Those programmes include aspects such as the place of minorities in European society and the historical legacy of colonialism. Two programmes that come to my mind are, for example, Creative Europe and the Citizenship, Equality, Rights and Values programme.