"Last year, I launched a call for women to paint and go out to paste with me in the evening. From then on, the movement developed all over France. Branches were created in provincial towns but also in villages. The movement also spread to Belgium and Switzerland and I regularly see new groups appearing," said French feminist activist Marguerite Stern. [© Louise Rozès Moscovenko]

Marguerite Stern was an activist within FEMEN for several years, then she launched a collage movement against femicides in 2019, which is now present in many countries in Europe and around the world.

In May, the Académie française finally decided that COVID-19 should be written in the feminine form, after it had been masculine for months?

The Académie française has nothing to say about the way language is used. They are men, the overwhelming majority of whom have been self-electing themselves since Napoleon. They have absolutely no legitimacy and aren’t linguists. It is not for the elites to dictate how one should speak or write. 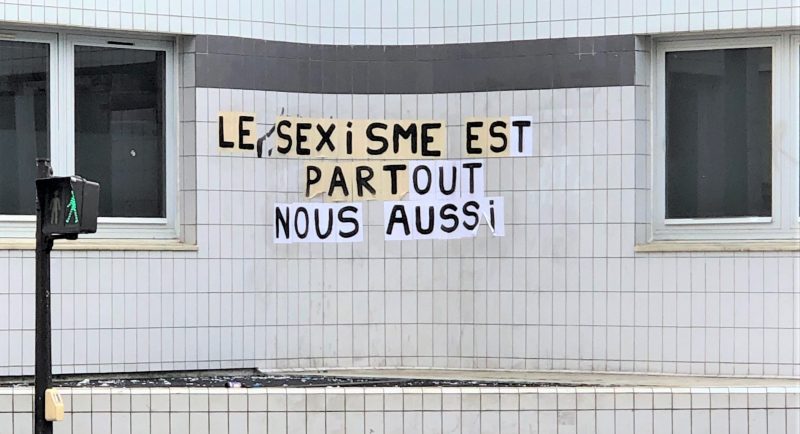 What parallel do you draw between the position of women in the French language and in public spaces?

I think that men have always colonised all spaces, including the world of languages. Women must also take it back as they must also take back their place in the street.

It was a shock for me to discover the work of Édith Maruéjouls, precisely because I too suffered a lot of discrimination and sexism when I was a child and then an adolescent. She draws a parallel between the way in which the playground space is used in a hyper-gendered way, with boys taking a more important and central role through games in which they come together like football, and girls, who stay on the side.

These gendered behaviours are later reproduced in the public space. Men take up all the space, stand around a lot. Women have a very utilitarian use of public space, moving from point A to B and tend to come close to walls and not make too much noise.

It is dangerous to be a woman in any space, including public space. That’s why I propose in my book to introduce a temporary curfew for men from 10 pm, so that women can take their place and move about in peace.

This is neither provocation nor irony. There is a parallel here with COVID-19: we were forced to restrict the individual freedoms of all for the common good and public health. Violence against women is also a public health issue because we suffer from it and are traumatised by it.

You are often reproached for being radical, what do you want to say to that?

You initiated the collage campaign against femicide. What impact does it have today?

Last year, I launched a call for women to paint and go out to paste with me in the evening. From then on, the movement developed all over France. Branches were created in provincial towns but also in villages. The movement also spread to Belgium and Switzerland and I regularly see new groups appearing. In Spain, Portugal, the UK, Italy, Germany and Poland, women are sticking together. And even outside Europe, like in India, Canada, Turkey or Syria.

What feedback did you get on these collages?

The most visible reaction from men is to tear off these slogans and deny speech. On the other hand, there are a lot of women, who don’t necessarily do collages but tell me that it gives them a sense of security in the public space, a feeling that they are no longer alone and that they belong to this struggle.

A post shared by Collages femminicidi Milano (@collages_femminicidi_milano) on Mar 10, 2020 at 2:11am PDT

However, several women’s liberation movements have made progress in recent years. Do you have any hope that this kind of speech will be taken into account in public policies?

I am trying to bring myself to stop commenting on the actions of politicians. I consider this to be futile in my activism. I now address civil society.  With the Grenelle Forum on domestic violence, the political sphere has clearly shown to what extent there is no “great cause for the next five years”.

There are laws in France, which are rather well done. We have a whole arsenal to combat femicides, prostitution, etc. We have a lot of laws to fight against domestic violence. Unfortunately, however, the police and the judiciary are doing a very poor job, due to a lack of means and training.

I was arrested two days ago for having pasted the testimony of Amelia Tiganus, a prostitution survivor. We were treated like criminals whereas pimps and clients, who are highly visible in the Belleville neighbourhood in Paris, are not arrested by the police.

The usefulness of politics in the noble sense is for me to have a concrete effect on the lives of citizens, and women continue to be massive victims of domestic violence, rape and femicide. This is not only the case in France but also at a European and global scale.

How do you see the future?

I’ve been very active for eight years now. I’ve observed that nothing or almost nothing is changing, so I’m beginning to have increasingly separatist thoughts. I’m starting to think that pedagogy towards people is ultimately useless.

In my militant and personal life, I come to the point where I no longer want to engage in dialogue and build my own world without them. On the other hand, I have a lot of hope in the community and the community of women. It is to them that I turn.