Ambassadors to Poland call for ‘environment of tolerance’ for LGBT+ people 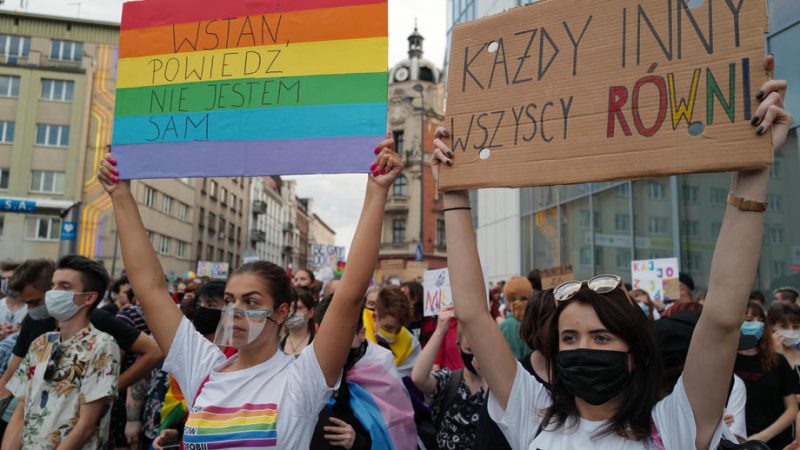 epa08596072 Activists and supporters of the LGBT (lesbian, gay, bisexual, and transgender) community take part in a demonstration in Katowice, Poland, 10 August 2020. The protest took place under the slogan 'We will not leave anyone - you will not lock us all up' after the 07 August events related to the arrest of LGBT activist Michal Sz., known as Malgorzata Sz. or 'Margot.' EPA-EFE/ANDRZEJ GRYGIEL POLAND OUT

Fifty ambassadors to Poland have written an open letter calling on Warsaw to help forge “an environment of non-discrimination, tolerance and mutual acceptance” as international concerns grow over the treatment of LGBT+ people in the country.

The US, British and Indian ambassadors were among the signatories, who paid tribute to Polish LGBT+ organisations seeking to “end discrimination, in particular on the basis of sexual orientation or gender identity”.

Part of an initiative to mark the annual Warsaw Equality Parade, cancelled this year due to coronavirus, the open letter campaign began in 2012 with 11 signatories. This year, it was coordinated by the Belgian Embassy.

Deputy spokeswoman for Belgium’s Foreign Ministry Marie Cherchari said the missive was not intended as criticism of any particular entity or organisation.

“There is no finger-pointing, but the letter restates some universal principles about human rights and non-discrimination,” she told the Thomson Reuters Foundation by telephone.

The open letter was published against a backdrop of increasing international pressure on Poland’s ruling Law & Justice (PiS) party over its attitude towards gay and transgender rights in the country.

Two weeks ago, the European Parliament passed a resolution calling on the EU to take action against Poland for rolling back LGBT+ rights and compromising judicial independence, including potentially denying it funding from the bloc.

“Every human being enjoys equal level of protection under the Polish law,” he posted in English on Sunday. “No one should be discriminated against in political, social or economic life – for any reason whatsoever.”

He added that “(LGBT-free zones) do not exist in Poland”, calling reports about them “#fakenews”.

Poland’s Foreign Ministry did not immediately respond to a request for further comment.

International LGBT+ rights group All Out delivered a petition last week backed by more than 340,000 signatures to European Commissioner for Equality Helena Dalli condemning Poland’s treatment of its LGBT+ community.

“It is testament to the fact that politicians in the Law & Justice party have actually pushed their anti-LGBT agenda beyond the limits of what is acceptable to parts of the international community,” he said.