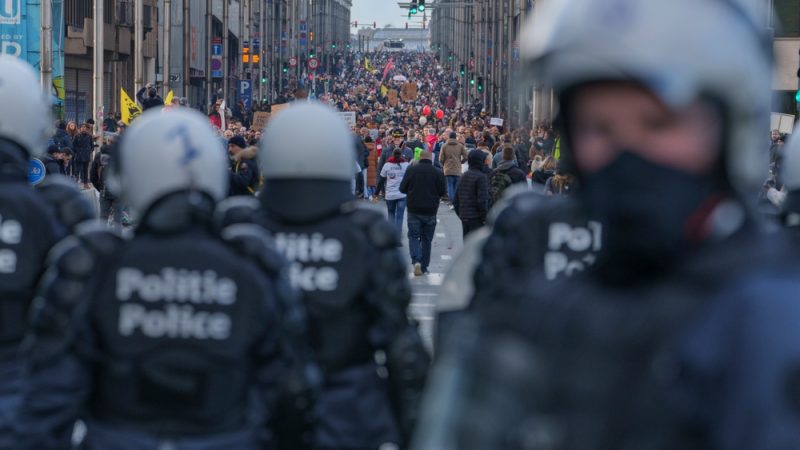 The right to peaceful assembly is under threat in Europe, according to civil society organisations. [Shutterstock/photojourBE]

Freedom of expression and peaceful protests are in dangerous decline even in “established democracies” in Europe, according to the 2021 edition of the annual CIVICUS Monitor index published on Wednesday (December 8).

“What we’re seeing year on year is that the right to peaceful assembly is under threat in Europe,” Aarti Narsee, Europe civic space researcher at CIVICUS, told EURACTIV.

The latest edition of the index rates 197 countries and territories on the level of civil liberties.

Among the twelve countries that have been downgraded in 2021, three are EU member states – Poland, Belgium and Czech Republic.

The report shows that the main violation of civil liberites in Europe is the detention of protesters. According to Narsee, this has been a growing trend in the continent over the past few years.

Commission spokesman Christian Wigand said that “peaceful protests are a fundamental right in every democracy,” and added that “it’s for member states’ authorities to ensure that they can take place in a safe and secure environment.”

However, detentions during protests are on the rise even in countries rated as ‘open’, Narsee said.

For instance, almost 500 people were taken into custody during the extinction rebellion demonstration in Finland in September and October.

“The space for civil society or civil liberties is declining. […] And that is even taking place in established democracies,” she said.

Excessive use of force by the police was observed during anti-racism protests in Belgium, which was downgraded from ‘open’ to ‘narrowed’.

In January, more than a hundred protesters were detained during demonstrations in Brussels, after 23 year-old Ibrahima Barrie died while in police custody.

Moreover, Narsee said that racist policing is an issue in Belgium and other European countries with a controversial colonial past, including the UK and France.

“I think there’s a larger pattern that needs to be challenged within the EU, but I think the case of Belgium is a good example to illustrate how colonial practices are still very much in place with the manner in which authorities respond to protests,” she said.

“People’s freedoms have been curtailed in a bid to stop the spread of the virus,” said Linda Ravo, senior advocacy consultant at the Civil Liberties Union for Europe.

While some measures were necessary to protect people’s health, she said that “several governments have placed disproportionate restrictions on civic space, media freedom and democratic participation.”

One example is Czech Republic, where some COVID-19 restrictions were passed “without proper justification,” she said.

According to Narsee, governments’ measures to protect citizens from the pandemic often had “a contradictory nature.”

“We’re seeing that governments are saying that they’re trying to protect people from the pandemic, but then authorities are going ahead and detaining people, at times in close, confined spaces,” she said.

In her view, governments often used the pandemic as a pretext to curb rights.

“Specifically, when it comes to the right to peaceful assembly, we’ve seen very conflicting and disproportionate measures implemented in Europe,” said Narsee.

In some countries, like Spain, Slovenia and Poland, the ban on public gatherings introduced to limit the spread of the virus was later ruled unconstitutional by national courts.

The pandemic has also led to increased attacks against journalists. In Germany, for instance, reporters were attacked during protests against COVID-19 measures.

Violence against journalists was already highlighted earlier this year by Reporters Without Borders’ press freedom index, which reported an increase in attacks and arbitrary arrests in Germany, France, Italy, Poland and Greece.

Another country where there are concerns over freedom of expression is Slovenia, according to Narsee.

In June, Slovenia’s Prime Minister Janez Janša lashed out against the Council of Europe, which criticised the online targeting of journalists by government officials.

“The erosion of media freedom in the attacking of independent journalists directly by the Prime Minister who blatantly does so on social media is extremely concerning,” Narsee said.