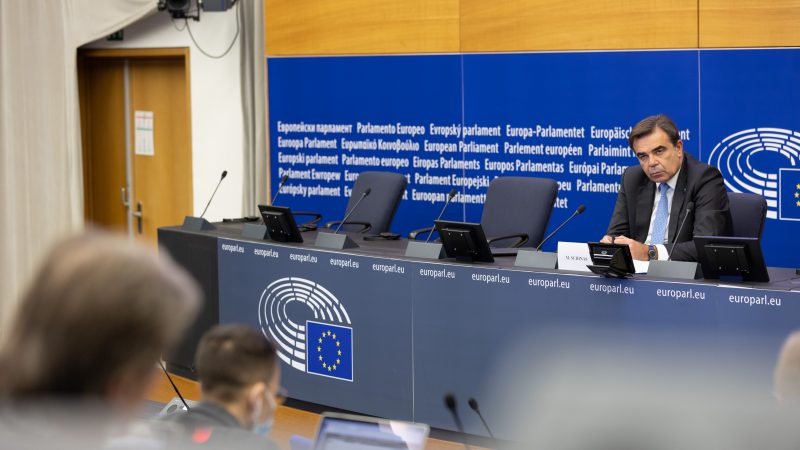 Margaritas Schinas, Vice-President of the European Commission, on Read-Out of the college meeting on an EU Strategy on Combating Antisemitism and Fostering Jewish Life, at the European Parliament in Strasbourg, on 5 October 2021. [Europe by Satellite]

The European Commission presented its new strategy against anti-Semitism on Tuesday (5 October), pointing to an ” increasing, worrying tendency of anti-Semitic sentiment” in the EU, particularly online.

“There is an increasing, worrying tendency of anti-Semitic attacks and sentiments across the European Union,” Commission Vice-President Margaritis Schinas said, citing a 2019 shooting at a synagogue in Halle, Germany, which killed two passersby and injured others.

“Anti-Semitism continues not only to be a burden of the past but also a present, dreadful threat in today’s Europe,” Schinas said.

We present the first-ever EU Strategy on combating antisemitism and fostering Jewish life.

Antisemitism is not a problem of the Jews, but of the antisemites. Fighting it a duty for all.

We owe it to those who perished in the Holocaust, to the survivors, to future generations. pic.twitter.com/oYdM4qsSnX

During the pandemic and subsequent lockdowns, Schinas said, there has been “a resurgence of centuries-old conspiracy myths fueling new forms of antisemitism online.”

He cited a study by the Institute for Strategic Dialogue (ISD), which shows a seven-fold increase in online antisemitic content in France and a thirteen-fold increase in Germany. The study compares the beginning of 2020 with that of 2021.

This ties into the first pillar in the new strategy, ‘preventing and combating all forms of antisemitism.’ It includes the creation of a “Europe-wide network of trusted flaggers and fact-checkers, including Jewish organizations,” Schinas said.

The network will work to remove all illegal online hate speech, develop pro-Jewish and pro-European narratives, and prevent the illegal display or sale of Nazi-related symbols, memorabilia and literature.

Other EU research identifies that “very worryingly, 38% of Jewish compatriots considered emigrating because they do not feel safe as Jews in today’s European Union,” Schinas said.

And more than one-fourth (28%) of Jewish people experienced anti-Semitic harassment at least once, with 34% of respondents avoiding visiting Jewish events or sites because they do not feel safe there.

To ensure that Jewish people feel safe in their daily lives, the Commission has set aside €24 million to “better protect public spaces and places of worship.” The funding will be available to member states in next year’s budget.

Moshe Kantor, president of the European Jewish Congress, applauded the Commission for stepping up against anti-Semitism.

“It is a commitment to the Jews of Europe that we belong and are a vital part of the European future, and the continent’s decision-makers will be making a supreme effort to ensure Jewish life flourishes,” he said.

We warmly welcome the release of the first-ever EU strategy on Combating Antisemitism and Fostering Jewish Life, and look forward to working with relevant leaders and officials to ensure its implementation.

Schinas mentioned that January 2020 was the 75th anniversary of the liberation of Auschwitz, the largest and most deadly Nazi concentration camp.

“We now have fewer and fewer survivors amongst us,” Schinas said. That means fewer first-hand accounts of the Holocaust, underscoring the importance of “preserving their legacy and ensuring that their stories remain alive and accurately told.”

Finding new forms of remembrance for those lost during the Holocaust is the responsibility of current generations, Schinas said.

And studies show that one in 20 Europeans has never heard of the Holocaust, while roughly half of Europeans view Holocaust denial as an issue in their country.

To combat these issues, the Commission will support the creation of a network of lesser-known places where the Holocaust happened, such as hiding places or shooting grounds.

EU funding will also go towards the creation of a European research hub on contemporary antisemitism and Jewish life, and officials will ensure that external funds do not go towards hatred or violence in partner countries.

“What we are putting today on the table in this strategy is not only a reactive, protective shield for our Jewish communities, but it’s also a very proactive approach that will allow Jewish life to thrive in our societies [and] foster Jewish life in the European Union,” Schinas said.