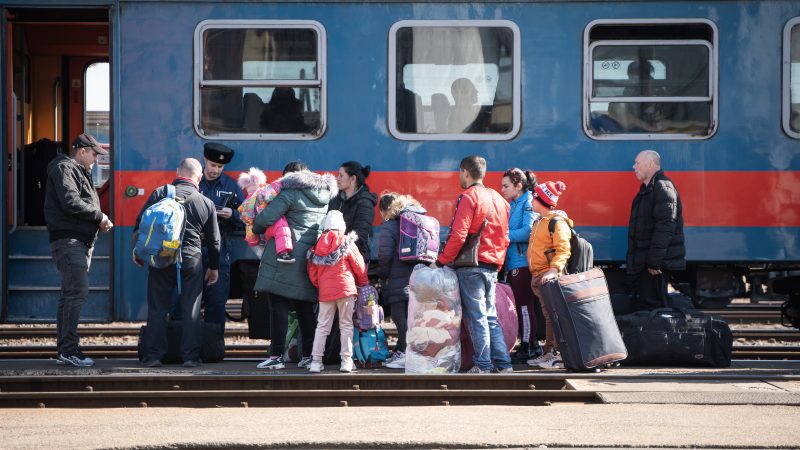 Around 100,000 Roma refugees have fled Ukraine since the start of the war, but many are coming back to reunite with their families. [Ede Judt / European Roma Institute for Arts and Culture – ERIAC]

After facing discrimination and being denied humanitarian aid in Hungary, many Roma refugees fleeing Ukraine head back to their war-torn country to reunite with their families, despite the risks, activists say.

It is estimated there are around 400,000 Roma in Ukraine, a country of 44.13 million. Since the start of the Russian invasion, over 4.3 million citizens, from them at least 100,000 Roma, are believed to have fled to neighbouring countries and further afield.

“You see that one train is coming through from Ukraine, and then another train is going back. And, unfortunately, many of them are Roma,” said Béla Rácz, Roma activist from 1 Hungary Initiative.

Rácz said there are two main reasons why Roma refugees decide to leave the relative safety found in Hungary to go back to Ukraine.

“One is how the administration treats Roma here so they don’t feel that they should stay in this country. And the other one is that they miss their family members, the fathers, the husbands, and they want to get back to them,” he said.

Like most other Ukrainian men aged 18 to 60, Romani men cannot leave the country and are urged to fight against the Russian army.

However, most Romani families prefer to stay in Ukraine, said Natali Tomenko, a young Roma activist and artist from central Ukraine.

“They’re scared and terrified by this because the Roma community has a very big sense of community, family, and it’s just unusual to separate,” she added.

Yet, she said, when the danger of the war became too real, her family separated “in order to survive.”

Together with her younger sister, sister-in-law and niece, she went to Hungary through Slovakia while her parents stayed behind.

Upon arrival in the neighbouring countries, Romani people often face discrimination because of their ethnicity.

Rácz said Roma were separated from white Ukrainians on the trains leaving and were greeted with “soft discrimination” in Hungary. 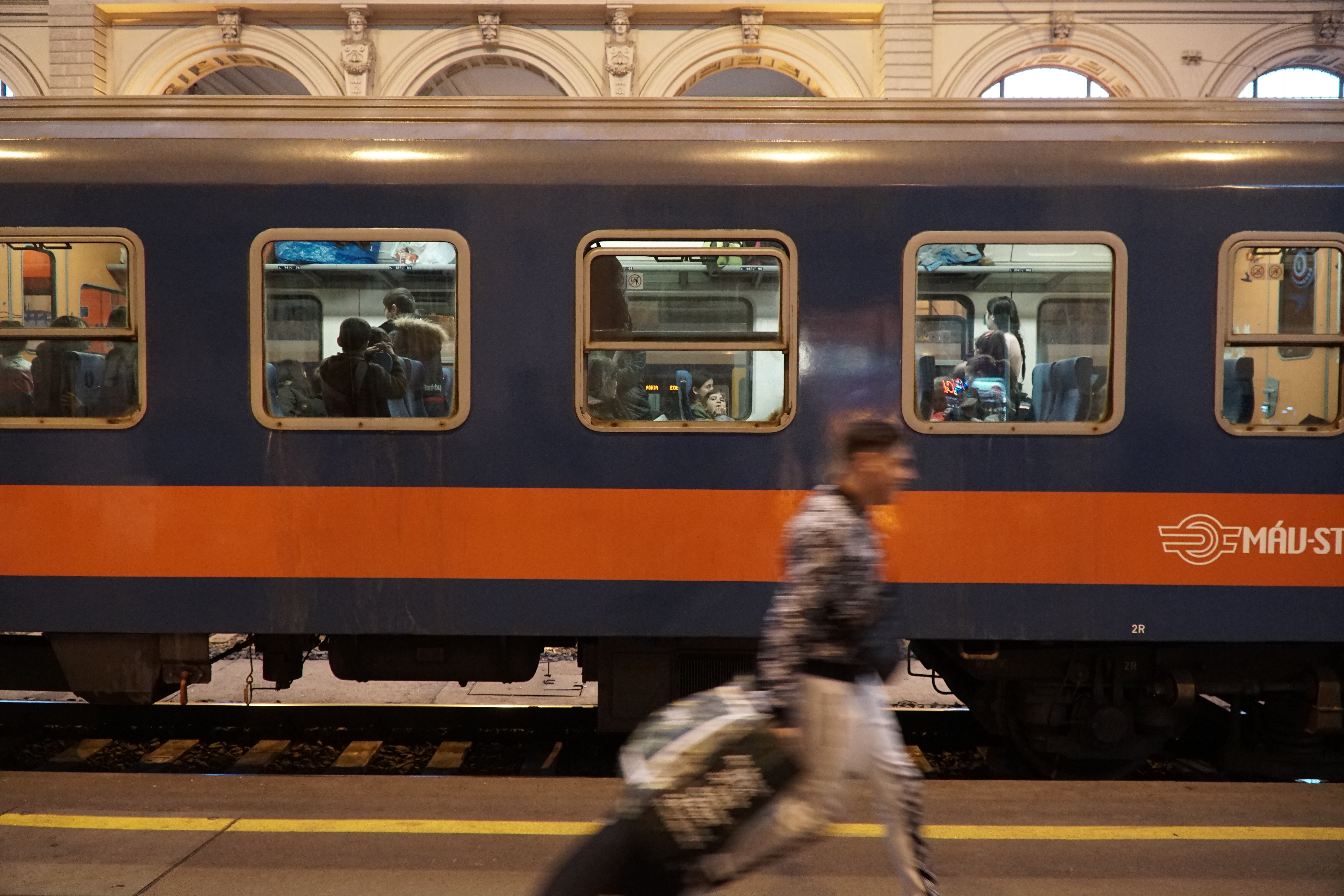 “It was not physical but more like verbal. You know, ‘Show your passport! Show your ID! Why you came? What you want in Hungary?’”

Around 10-20% of Ukrainian Roma are stateless and do not have any identification documents, which could restrict their access to international protection within the EU.

“Roma people already live a life without documentation, and they are particularly at risk and exposed now because, how are you going to prove all your existence or your background?” said Juliana Wahlgren from the European Network Against Racism (ENAR).

Ukrainian Roma, at times, can use baptism certificates as IDs, however, Roma coming from the western part of Ukraine are often denied support not because they are stateless but because they have Hungarian citizenship.

In 2011 Fidesz introduced a new simplified path to acquiring Hungarian citizenship for ethnic Hungarians living outside the country, making it easier for many Hungarian Roma living in Ukraine to receive a second passport.

“When they arrive in Hungary, they can’t register as refugees because they have a Hungarian passport, which is very tricky because they don’t have a place where to live and they cannot access those facilities provided for refugees,” Tomenko said.

On top of this, Rácz said Ukrainian Roma refugees are often ignored by charities and humanitarian organisations, like the Red Cross.

“If they have these traditional clothes and they look poor, they are afraid to approach them”, he said. Faced with accusations of short-term stay in Hungary for free food, according to Rácz, Roma are told: “they’re not real refugees.”

The Hungarian Red Cross told EURACTIV they are “concerned about any reports of discrimination against the Roma or any other marginalised communities.”

The organisation said they have already assisted many Roma refugees and that everyone receives support, “regardless of their status and identification, and always based on need.”

However, Rácz said not all people in need have access to aid in the capital, for example, Romani and homeless people are sometimes told, “this is not for you. This is for the refugees who are coming”.

Moreover, he said refugees arriving at railway stations were checked before distributing food and water. While non-Roma could take anything they wanted, Roma refugees were given rations.

On 21 March, the Hungarian government opened a new transit facility for the incoming refugees in the capital’s BOK Sports hall, but the 1 Hungary Initiative was not invited to operate there.

Instead, activists are now applying to become volunteers with international organisations “to get in because we don’t see what’s going on.”

Meanwhile, Roma living close to the border, opened their doors to refugees and tried to help them out, despite already struggling to make ends meet.

“Many provided accommodation for many refugees in Hungary, but they are the poorest,” Rácz said.

Rácz said while most refugees want to travel onward from Hungary to other countries, many Roma lack information, financial resources and family members abroad.

“They were more in a situation where they needed more help,” he said.

Yet, besides some indications that the capital city is planning to organise remedial education for Roma refugees in schools, little has been done by the public authorities to aid Roma in need of special attention.

Adám Balogh, an activist at the Life Builders Foundation (Életépítők Alapítvány), a Christian charity that brought over more than a hundred Roma from villages around Berehove, said they are now having difficulties securing education for the children.

Illiteracy poses a significant hurdle despite the willingness to enrol them in the school in Súr, the small village of western Hungary where the foundation has property to host the refugees.

“What do you do with an adolescent boy or girl who can’t read or write?” he said, emphasising the risks of bullying without prior education and proper integration.

To help, teachers from the school have volunteered to give classes in their off-hours, and the organisation is now looking into bringing teachers from Budapest.

The European Commission said it followed the situation of the Roma community closely but noted that the short report of the EU’s rights agency (FRA) highlighted “the tremendous solidarity towards the people fleeing from Ukraine” and “did not observe any discriminatory or racist acts during its field visits”.

The EU executive also called for a prompt investigation of incidents reported in the media.

In contrast, the FRA said although they did not record maltreatment during field visits, it noted: “with concern reports in the media and from civil society that some Roma were left waiting for transportation at border crossing points”.

“Some people refuse to sleep in the same tents with Roma families or travel in the same vehicles with them”, the agency observed in its 8 April statement.

When he travelled to Záhony, near the Ukrainian border, Rácz saw that Roma refugees were left to themselves and were not informed about their rights.

“The problem here with these refugees is that they are invisible for the administration.” 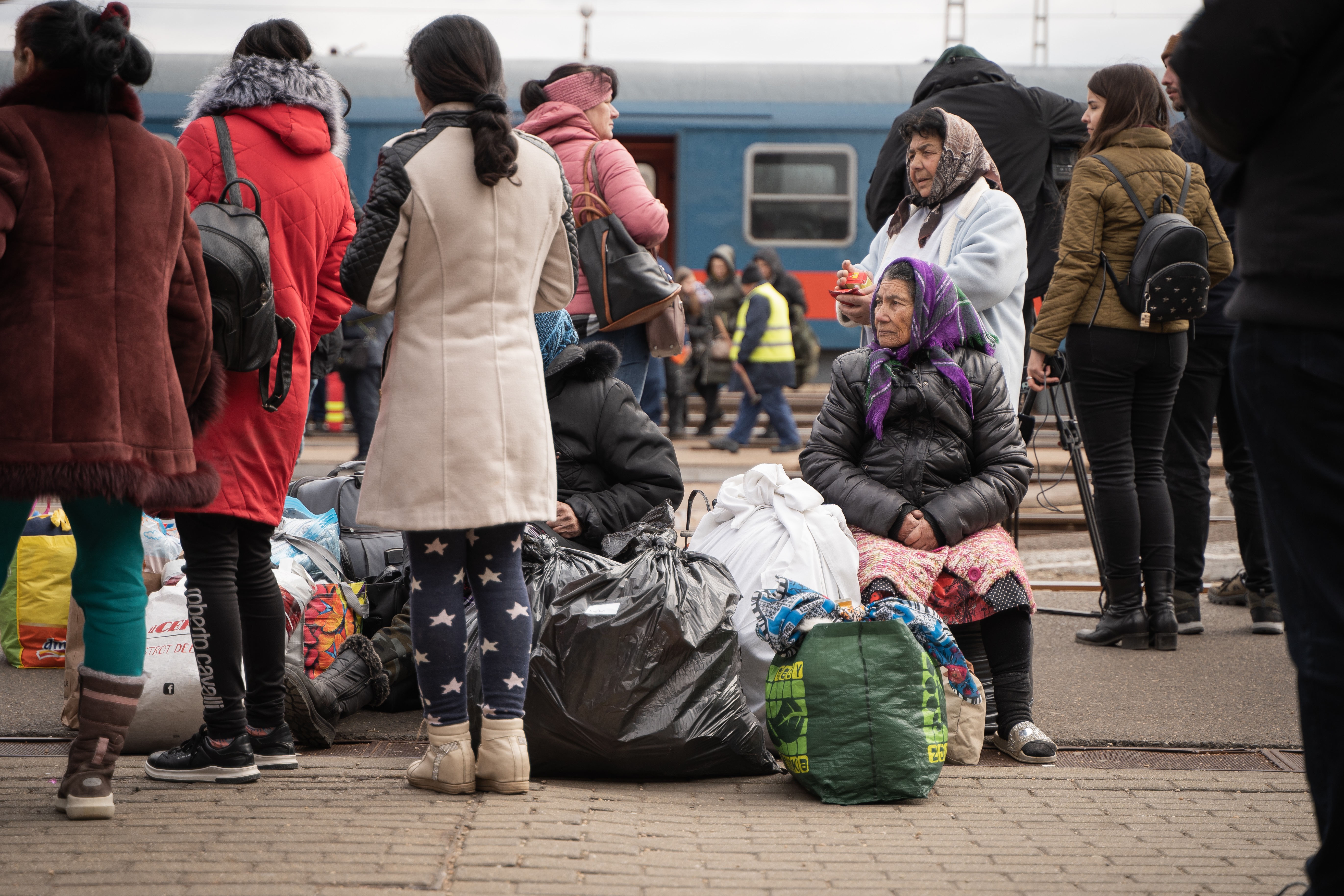 While staying in Budapest, Tomenko, who decided to leave Hungary for Vienna after receiving no support during a medical emergency, said she was not contacted by the government and did not recieve support from humanitarian organisations.

Instead, she turned to friends, colleagues, and connections from her own Roma youth organisation, ARCA, which continues to provide support to those who remain in Ukraine.

“We are providing financial support to Roma and also non-Roma families who approach us when we see that people are really in need,” she said, adding that they often receive pictures of houses where there is no food left.

“People are happy to receive one bag of potatoes, for example, or one bag of milk,” she said.

If you would like to support Roma refugees, please visit ARCA’s initiative and other Roma initiatives here, here, and here.