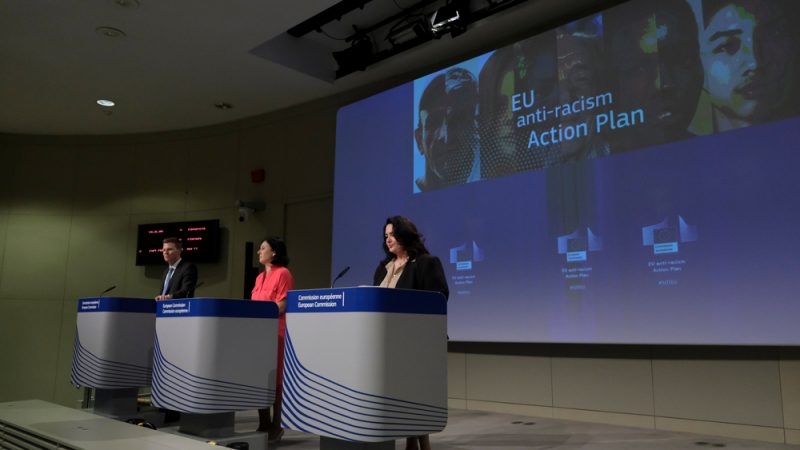 In September 2020, the European Commission presented the EU anti-racism action plan to tackle structural racism in the continent. [Shutterstock/Alexandros Michailidis]

Last year, the EU hastened efforts for the equality of European citizens with a number of programmes such as the gender equality strategy and the anti-racism action plan.

“This shows a political commitment and an evolution in this regard. I think they should be celebrated although it’s not enough,” Juliana Wahlgren, acting director at the European Network against Racism (ENAR), told EURACTIV.

According to Wahlgren, these strategies risk falling short because of “a lack of engagement and accountability” on the part of member states.

“You can have the best legal framework and legal proposals at the EU level, if you do not mean for implementation at the national level, these remain empty treaties, empty policies,” she said.

“I think it’s at the member states level implementation where we can find the biggest gaps, violations and inconsistencies with the commitments of the EU institutions,” she added.

One problem is the lack of information from EU countries, which makes it virtually impossible to verify whether frameworks are efficiently applied.

Wahlgren said this was the case with the Roma strategy, where it was unclear if the communities were really benefiting from actions at the national level.

“We do not know if the money was even correctly used for Roma communities. We do not know how this really impacted structurally societal change.”

Moreover, the lack of political will is also hindering progress as some national governments do not fully commit to fight against racism and discrimination.

“It is a fact that there are a lot of politicians, there are several governments that don’t care because they are not affected by racism and discrimination,” Swedish MEP Alice Kuhnke told a recent EURACTIV event.

She said she experienced this lack of interest first-hand back when she was the minister for democracy and culture in the Swedish government in 2014-19. When attending meetings on Roma discrimination, she said she was the only minister taking part.

“Even though I tried to call other responsible ministers in the government and tell them, ‘please come to this meeting, because we need to fight the racism and the discrimination against Roma’, they didn’t show up because it wasn’t important enough.”

Kuhnke said this is widespread across Europe, with many “governments that think that discrimination is acceptable.”

“And one outcome of this acceptance – that racism is accepted – is that the equal treatment directive that I am the rapporteur for has been blocked for 14 years,” she said.

The anti-discrimination directive was presented by the European Commission in 2008 and aimed to implement the principle of equal treatment into EU law.

Currently, European citizens are protected against discrimination in most domains, including employment, healthcare, housing and education, but only on the grounds of race and ethnic origin, through the racial equality directive (RED).

The anti-discrimination directive would have expanded this protection to discrimination based on religion or belief, disability, age, and sexual orientation, which is currently only covered when it comes to employment.

However, not all of the 27 member states in the Council approved it and the draft was blocked.

“The main problem we have is unanimity. It is one of the few areas where we need unanimity for every legal act that we are proposing,” said Szabolcs Schmidt, head of the non-discrimination and Roma coordination unit at the European Commission.

Schmidt said the Commission should strive to change this requirement, “but as long as we have the unanimity, it is extremely difficult to advance with the legislative framework.”

While the legislation is stalling, the role of the EU institutions is to make sure the rights of all people living in the EU are being upheld, Wahlgren said.

“They can make sure that member states are accountable to implement what is required.”