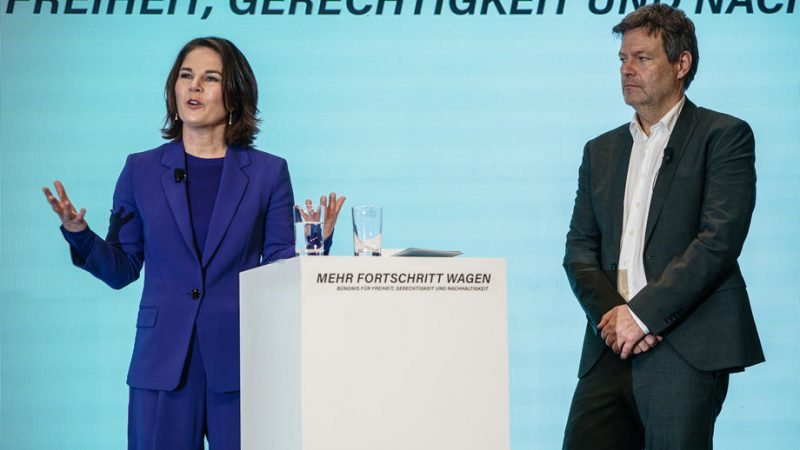 We stand for an approach, “which is not looking at individual groups, but understands diversity in society as a strength and is making policies for the diversity in society,” Annalena Baerbock, lead candidate of the Greens emphasised. [CLEMENS BILAN/EPA]

The coalition agreement of Germany’s Social Democrats, Greens and the liberal FDP puts a special emphasis on measures to guarantee the participation of side-lined and vulnerable groups and to fight racism on all fronts.

During the presentation of the coalition agreement on Wednesday (24 November), all parties declared their commitment to diversity in German society.

“We stand for a sociopolitical liberalisation. Diversity and individuality is what connects us,” FDP leader Christian Lindner told the press conference.

The Greens are particularly eager to make diversity a top priority.

This stance is also reflected in the coalition paper itself, which announces that the “traffic light coalition” will push for more inclusion of Muslims and Jews, as well as LGBTQI.

Furthermore, the three parties announced they want to pass a federal participation law that will clearly say Germany is a “country of immigrants.”

The coalition also plans to fight racism, anti-Semitism and anti-gypsyism at a hitherto unseen scale, to ensure that Germany becomes a more inclusive society, based on the values of diversity.

The idea to adopt a law that will give the participation of vulnerable and marginalised groups a legal foundation is not new.

Ahead of the election, the Federal Conference of Migrant Organisations in Germany already called for the adoption of such a law and presented their very own legal proposal on what a federal participation law could look like in August.

So far, the conservative CDU has always blocked such a proposal, arguing that legal provisions to ensure participation would be an “ultima ratio [last resort]”.

However, with the coming traffic light coalition, this will likely change, as the three parties announced that they want to strengthen diversity by passing such a participation law.

Furthermore, they also want to pass a new “diversity strategy” to ensure that the minority groups are more represented in public administration.

A study by the think tank Friedrich Ebert Stiftung,  which is close to the SPD, has shown that people with a migration background only hold seven percent of all jobs in public administration, while migrant communities constitute 25% of the overall German population.

The coalition will also push for a flexibilisation of the citizenship law, to boost participation of migrant communities. They want to enable people to have multiple passports and will facilitate the process of acquiring German citizenship.

Intensify the fight against racism

The coalition agreement also emphasised that the new government would also continue to “fight right-wing extremism and racism” and to further develop measures to tackle the problem.

The coming government wants to develop a new strategy to ensure greater social cohesion and prevention of extremist or conspiratorial thinking – both online and offline.

Furthermore, the government is planning to strengthen governmental bodies to fight racism and will invest in research and monitoring.

For instance, the German Centre for Integration and Migration Studies will play a greater role in monitoring racism across Germany.

“At first glance, the coalition agreement is encouraging,” Markus N. Beeko, secretary-general of Amnesty International Germany, said in a statement.

The Amadeu Antonio Foundation, one of Germany’s main civil society organisations on antisemitism and racism, was also pleased with the results of the coalition talks.

The coalition agreement gives the impression “that the new federal government takes the protection of democracy and the fight against right-wing extremism seriously,” the foundation said in a statement.

In a similar vein, the Central Council of Jews in Germany stated that the coalition agreement “encourages optimism.”

“Combatting right-wing extremism and antisemitism successfully is essential for the future of Germany,” the president of the Council, Josef Schuster, said in a statement.