Time for Europe to face uncomfortable truths about racial inequality 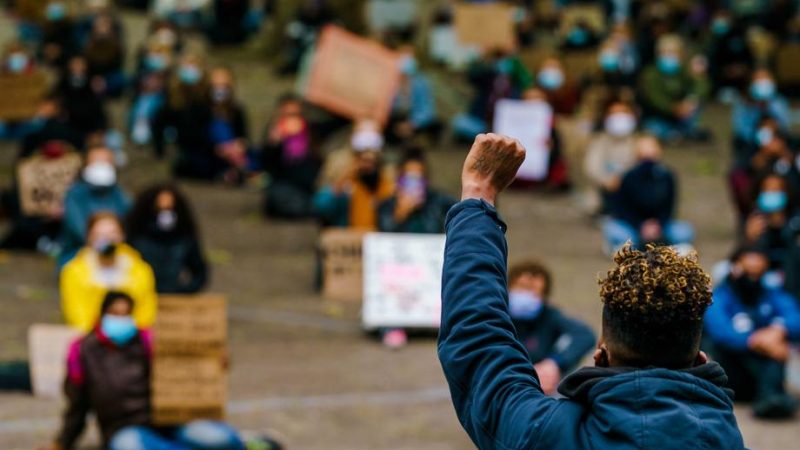 Demonstrators during an anti-racism meeting on the Abdijplein, in Middelburg, the Netherlands, 8 June 2020. In multiple Dutch cities demonstrators come together to protest against the police brutality against black residents of the US and Europe. The immediate cause of the protests is the death of African-American George Floyd, who died during his arrest. A bystander's video posted online on 25 May appeared to show George Floyd, 46, pleading with arresting officers that he couldn't breathe as an officer knelt on his neck, in Minnesota, USA. The unarmed black man later died in police custody. [EPA-EFE/MARCO DE SWART]

Europeans are uncomfortable talking about structural racism. But it is the lived reality of millions of people of colour on the continent, and needs to be addressed honestly, writes Amelie Glauber.

Amelie Glauber is a pseudonym.

The man on the bench gazed at the sky. He puffed his cigarette unbothered by the goings-on around him. I sat a slight distance from him, my curiosity pushing me to ask what I was missing in the ominous clouds.

“They just released me from prison today,” he said. “I did not have the liberty to enjoy the sun like this, or converse with the skies unabated like this.” As the conversation went on, it became apparent to me that he was looking for answers in those clouds, for why he was arrested in the first place. “Mistaken identity”, they called it when they released him. For four weeks, he had not seen his three-year old son or his wife. In those four weeks, he had lost his job as a cook at a small restaurant, where he had worked since coming to Germany four years earlier.

Drug peddling was the crime he was alleged to have committed. The suspect’s description matched his, the police had told him: “stout, black male, in his thirties”. A depiction that could have fit most of the few black men in his street or elsewhere in Germany. Based on that, they arrested him. They searched him as well as his apartment and found nothing. Still, they kept him in prison for four weeks. He was suddenly released with neither an explanation nor an apology. He, not the police, will suffer and live with the consequences of being himself, a human being – a black man. As I watched him wallow on that bench, I reflected on the news of Germany’s Minister of Internal Affairs, Horst Seehofer’s dismissal of an investigation into racial profiling by the police. His argument being that there was no need for such an investigation because the police must be non-discriminatory in their checks. I cringed at the thought of many more black men who will sit lost on the bench or in prison because they have been racially profiled. See, when such evaluations are not done, we are left in oblivion as to how serious the racial profiling of black and coloured people in Germany really is, how severe police brutality is and, in general, the prevalence of racism and racial discrimination in Germany and other European Union states.

One example is a shocking recent announcement by the chief of police in Stuttgart, who wants to investigate and publish the family histories of suspects of the riots in the city that took place in June. How wrong can we get it? How is it not clear that this will only lead to further discrimination of minorities who are already under suspicion by being labelled, “those with migrant backgrounds?”

Call it by its name: Racism

Racism is not a black people’s problem. It is everybody’s problem. The EU must admit to racism being a form of discrimination before it can implement measures to tackle it. The constant images of starving black children in our streets, screens and mailboxes, affirm the image of people of African descent as needy people, in need of white redemption. Most of Europe is shaped by a single story of poverty and subordination of the black race. It is difficult for white Europeans to admit that they are unconsciously racist, yet daily they racialize. I know this for sure, as I experience it in my office every day, when most people look over my shoulder to the white, often inexperienced employees in my supervision for something, and only when it hits a snag, do they come back with their tails between their legs to ask me. This, fellow humans, is what is called structural and systemic racism. It happens to be the daily reality of many people of colour in Europe.

It is common for people of African descent born and/or educated in Europe, despite excelling in their studies, to remain jobless, or when employed, either struggle to prove themselves or have bosses who perform poorly but are their bosses, simply because of the colour of their skin. At that point, it becomes clear to them that they will end up doing the work, as their bosses take the credit. This is what is called ‘white privilege’. How can we rectify it? There must be a public admission of the problem, and the willingness to honestly converse and change, unlearn the mistruths related to racism and racial inequality and relearn equality and non-discrimination. The EU and its Member States cannot ignore the loudly spoken words of its citizens marching in the streets of major cities like Paris, Berlin and Brussels, chanting, ‘Black Lives Matter’. Legislators like Seehofer should not be allowed to stop an evaluation into a matter that could help preserve human dignity and prevent the suffering of racialized black and coloured people. This is not in line with EU values. The European Commission’s Vice President, Margaritis Schinas, cannot downplay the issue by saying that Europe has a better record than the US on race issues. The people are speaking; they have taken to the streets. Listen, learn and rectify.

I am reminded of the continuous discrimination of the Roma people, who even in 2020 still struggle for their human rights and equality within the EU. Let us act now, so that no one or group of people is left out, so that future generations may boast of an EU that is free from racism and racial discrimination. A Europe with values that are truly shared.