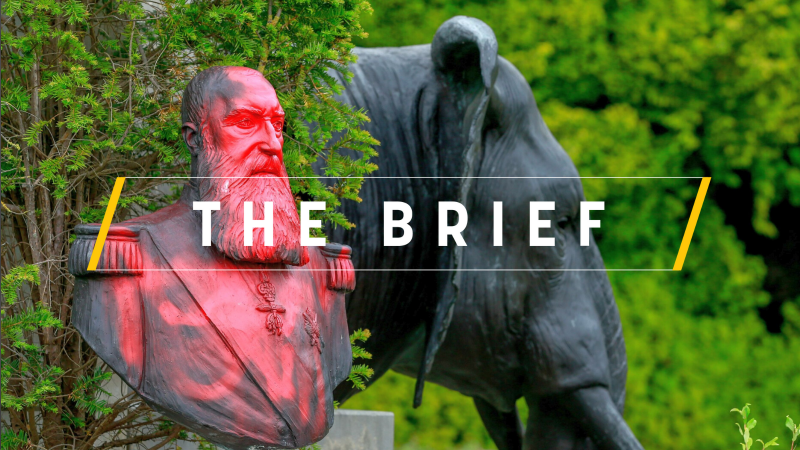 In much of Europe, institutional racism is so deeply ingrained that millions of white people don’t even notice it. Those in much of provincial Europe could be forgiven for not seeing it. But we delude ourselves if we believe that our societies offer equal opportunities.

Holding up the mirror to our past may not be pleasant but it has to be done.

The mass murder and mutilation (not to mention economic pillaging) by Belgian King Leopold II put him on a par with Hitler and Stalin in the annals of modern butchery. Statues of him should never have been erected in the first place.

The Belgian state then connived with the CIA to murder Patrice Lumumba, the Democratic Republic of Congo’s first elected prime minister. Yet Belgium has only recently, and only partially, grappled with its past. Many Belgians are still instinctively defensive about it. And – let there be no doubt – they are not alone.

In the UK and France, the brutality of their colonial past is barely taught in secondary schools. Nor is the leading role of Europeans in developing and profiting from the slave trade.

Both countries still tend to celebrate their colonialism and the spread of their language and political influence, which, particularly in the case of France in Africa, continues to this day: in francophone west and central Africa, interest rates are still tied to the French central bank.

Yet many of France’s inner-cities are a monument to systemic discrimination, while the Windrush scandal – just two years ago – saw dozens of blameless Britons wrongly deported or threatened with it by their own government. These acts, committed by a silent and faceless bureaucracy, involve no bloodshed but are every bit as violent as the killing of George Floyd.

A number of European countries take pride, openly or secretly, in being white and Christian. The treatment of the Roma minority across Europe would probably deserve an entire chapter.

While the European Commission has piled on the platitudes that the EU is committed to equality and that “black lives matter”, the fact remains that Migration Commissioner Margaritis Schinas’s job description is to “promote the European way of life” – a barely veiled sop to racists. People in glass houses really shouldn’t throw stones.

The European Commission has never had a black commissioner. Less than a year ago, Majid Majid, a Green party MEP until Brexit, found himself escorted out of the European Parliament chamber he had been elected to by Parliament officials. Troublingly, neither the Parliament nor Commission has ever acknowledged that they have their own problems with diversity and race.

Just as shameful is the lack of diversity in newsrooms across the continent. Nobody in politics or the media can seriously suggest that their industries are bastions of equal opportunity. It’s time we changed that.

Debates and expressions of solidarity are welcome but not nearly enough. That Europe is now forced to look in the mirror is long overdue, even if it will be painful for some.

But now is the time to address these injustices. Redress is more important than recrimination, which is why we must focus on what actions we take in our countries once the protests die down.

Aside from the injustice of it, discrimination is also a massive waste of talent. If we truly were more equal and embraced our diversity, our societies would also be a damn sight happier.

If not, we will condemn another generation to gross injustice and denied opportunity.

We realise that Monday’s edition of The Brief — which like all Briefs, presents an opinion of the author and is not a news story — struck many readers as inaccurately depicting racism in Europe. We offer our apologies. We welcome the conversation and invite readers who have a perspective to share to submit an op-ed.

As one of the most influential Eurogroup figures during the previous crisis, Thomas Wieser, described the EU’s fiscal rules as “bad practical economics”, in particular for handling a crisis such as the current one, in an interview with EURACTIV.

The European Commission has come out with an unambiguous message against China’s efforts to spread disinformation related to the coronavirus outbreak in Europe – the first time the EU executive has publicly called out China for its role in spreading fake news.

Germany’s defence minister, Annegret Kramp-Karrenbauer (CDU), insisted that the government cannot speculate on the reported withdrawal of US troops from the country, as it has so far only seen the news report and not been officially notified.

Last year, Germany’s Anti-Discrimination Agency received more than 3,500 complaints for discrimination incidents, of which cases of racial discrimination saw a marked increase. Experts are now calling for a modernisation of federal laws.

The EU has called for the release of a vlogger arrested in Belarus in May, as the challenges to the more than 25 year-long rule of the country’s strongman Alexander Lukashenko mount in the run-up to the presidential election in August.

Governments across the EU lose €15 billion each year due to counterfeiting, which is increasingly often linked with other serious crimes, according to a report by the European Union Intellectual Property Office (EUIPO).

Air quality is getting better, but experts are warning this is based on short-term effects and suggest now is the time to rethink transport.