The Brief, powered by ITI – Nothing left to say 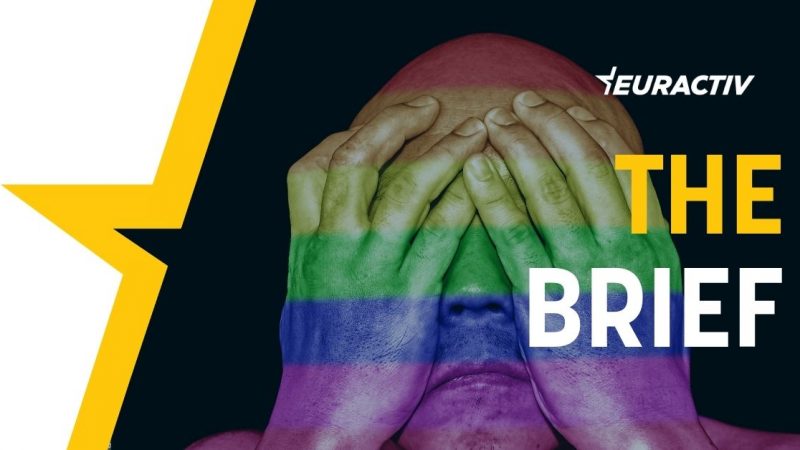 We are looking into it. That is the answer that the Guardian of the Treaties – documents that enshrine the principles of equality and human rights into EU law – gave in response to a new Hungarian law that tramples those very rights by lumping together LGBTQI+ people in with paedophiles.

The Commission logo on the Twitter profile of the Commissioner for Equality Helena Dalli currently features rainbow colours, a LGBTQI+ symbol.

Yet, at the time of publication, she had yet to make any public statement a day after the adoption of the law that erases sexual and gender minorities from public life in an EU country.

In the run-up to the vote on the legislation, she told Reuters that Hungary could “definitely” be sanctioned similarly to Polish regions that saw EU money withheld after they had declared themselves “LGBT-free”.

That statement seems to directly contradict what an EU spokesperson told reporters today, saying that the Polish sanctions were made in a “very specific context”.

On top of that, the spokesperson said the Commission “would not see a connection between this Hungarian law and the [rule of law] conditionality mechanism”, which concerns breaches that affect the sound financial management of the Union budget.

Meanwhile, Justice Commissioner Didier Reynders tweeted that he “deeply regrets” the law an hour after a daily press briefing during which journalists tried to wrangle a clear political statement out of the Commission.

German EU Affairs Minister Michael Roth was quick to condemn the law, which prohibits portrayal and promotion of homosexuality to minors, after it was passed on Tuesday (15 June). The Council of Europe human rights commissioner (nothing to do with the EU) did so the day before.

Meanwhile in Brussels, the Commission says it is “aware of the national debate” around the law and is conducting a legal analysis of the legislation – that’s the crux of what the EU executive told press on Wednesday.

The irony, of course, is that there has been no “national debate” around the bill, just like there hasn’t been a national debate around the vast majority of issues in Viktor Orbán’s Hungary in recent years. The Fidesz regime does not leave space for debate.

The bill’s amendments were made public on Thursday. During the parliamentary debate on the amendments on Monday, one conservative and one ruling party MP were present on the plenary floor. Neither mentioned LGBTQI+ people.

Pressed for a reaction, a Commission spokesperson said „generally, when protecting children from harmful content, it is important for member states to find the right balance of relevant fundamental rights, such as the freedom of expression, or non-discrimination.”

What they did not realise is that – inadvertently perhaps – they put the portrayal of LGBTQI+ community in the same category as “harmful content”. As if the right to existence of gay, lesbian, bi, trans, queer, intersex people needs to be balanced against the need to protect children from harmful content.

Meanwhile, the deafening silence from the Berlaymont is a reaction and a message in its own right. It is telling perhaps as many as 26 million LGBTQI+ Europeans that they are not worth the political risk of taking the right, but potentially costly positions.

That message has been heard, loud and clear. Nothing left to say.

A message from ITI:  Tech Welcomes Progress
Our industry welcomes yesterday’s EU-U.S. leaders discussions on tech policy and stand ready to work to make this vision a reality. More from ITI here.

Close cooperation with Russia is a “distant prospect” and the EU should prepare for a further deterioration of relations with Moscow, the EU’s chief diplomat Joseph Borrell said on Wednesday while presenting the Commission’s proposal for a new strategy on EU-Russia relations.

Agri-food stakeholders and policymakers have welcomed the extension of the retaliatory tariff reprieve with the United States for another five years, as well as the steps taken to end the civil aircraft dispute that has disproportionately affected the sector.

Little progress is being made towards breaking the impasse with the EU on the customs procedures for goods travelling to Northern Ireland and time is running out, the UK’s Brexit minister David Frost admitted on Wednesday, adding that London was “keeping all options open”.

Don’t forget to check out this week’s Green Brief, which talks about international summits and unfulfilled green ambitions.

The European Parliament still hopes to reach an agreement on the EU’s Common Agricultural Policy (CAP) reform during Portugal’s presidency of the Council of the EU, according to the chair of the assembly’s agriculture committee.

French President Emmanuel Macron announced the objective of having “10 companies worth €100 billion by 2030” in Europe on Tuesday (15 June) after he received the “Scale-Up Europe” collective on Tuesday (15 June), which presented him with its recommendations to encourage the emergence of digital giants in Europe. EURACTIV France reports.

Europe’s first quantum computer was launched in Ehningen, Baden-Württemberg on Tuesday (15 June), amid expectations from experts that the tech’s exorbitantly high computing power will do away with “traditional computing”. EURACTIV Germany reports.

Former rugby player and founder of the Fair Play For Planet label Julien Pierre has launched a challenge to film himself on social networks collecting waste or cycling to the stadium as part of the #FPFP challenge. EURACTIV France reports.

A recent Reebok study has ranked the most eco-friendly cities for practising sports, with London, Copenhagen, and Amsterdam coming out on top in Europe, and France trailing behind in 19th place. EURACTIV France reports.