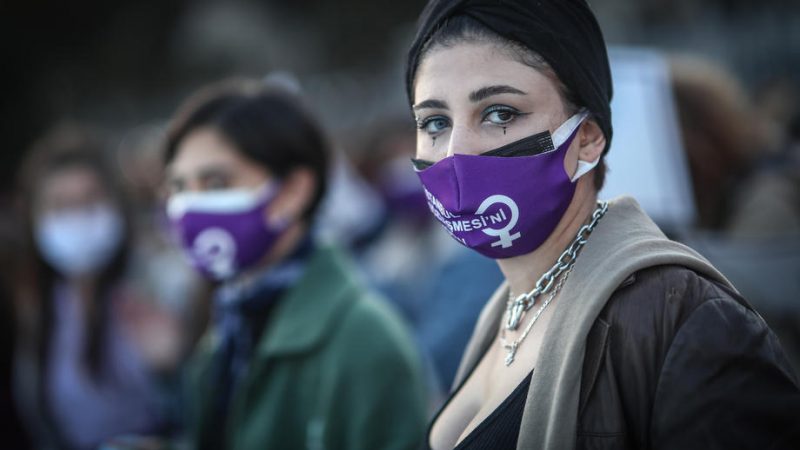 A woman shouts slogan during a protest against Turkey's withdraw decision from Istanbul Convention in Istanbul, Turkey, 2 April 2021. [EPA-EFE/SEDAT SUNA]

The Istanbul Convention is a milestone in the fight against gender-based violence. We are determined to ensure full implementation and enforcement in our countries, write high-level signatories from seventeen European countries.

Signatories are ministers from 16 European countries.**

Today we mark the 10th anniversary of the opening for signature of the Council of Europe Convention on Preventing and Combating Violence against women and domestic violence. It was concluded and signed in Istanbul in 2011.

A result of a series of European initiatives started in the 90’, it came into force on 1 August 2014 and it is known as the “Istanbul Convention”. As of today, 33 countries have signed, ratified and enforced it. Another 11 countries have signed without ratifying it yet. One country recently withdrew from it.

The Istanbul Convention has been a landmark achievement in the fight against gender-based violence. It is the first European legally binding treaty in this area.

It includes a set of wide-ranging measures to prevent violence, protect its victims and prosecute perpetrators. It gives the signatory countries a set of tangible measures such as shelters, helplines and comprehensive help for victims of all kinds of violence.

In addition to those concrete measures, it firmly states that violence against women is a violation of human rights and a form of discrimination.

The convention created also a legal framework at pan-European level and includes a specific monitoring mechanism to ensure effective implementation of its provisions.

The implementation of the Istanbul Convention has already had a real impact on the lives of women and men, girls and boys in all their diversity.

It has helped to raise awareness of gender-based violence in society. It has been instrumental in raising more ambitious legislative and policy standards in national legislation.

What is more; it has resulted in more training for legal professionals, health professionals and law enforcement – a very important measure if we are to remove obstacles to access to justice for victims of gender-based violence. Importantly, it has also raised the profile of the societal debate on the issue.

It is with great concern that we witness an ever-growing opposition to this landmark Convention. At the moment of health, economic and social crisis, women were at the front line of the coronavirus pandemic working in the healthcare, care, education, retail or cleaning sectors.

At the same time, the number of reports of domestic and intimate partner violence rose quickly in the first months. Shelter for victims and counsellors faced a surge in demand and women and girls were often trapped at home with their perpetrators during lockdowns and curfews. And yet; the voices against the Convention are louder than before.

Every woman and girl has the right to live free from violence. Preventing all forms of violence is not controversial. Protecting victims of abuse is not controversial. Most of all, it is not negotiable. And yet, since its conception, the convention was met with an unprecedented campaign of disinformation and misinterpretation.

Its opponents took offence at the Convention’s definition of gender as a social construct or on the requirement for including teaching material on non-stereotyped gender roles.

The recent decision of the Turkish government of 19 March 2021 to withdraw from the Convention, has shown us that those threats of revocation are indeed very real. The decision of Turkey comes 10 years after it was the first country to sign the Convention in Istanbul.

We are deeply alarmed by those unprecedented attacks on women’s rights and their safety. We stand together in solidarity with women and girls in Turkey and beyond. We call on Turkey to reverse its decision.

We also urgently call on all Council of Europe Member States who have not yet done so to sign and ratify this landmark treaty.

We are committed to ensuring full implementation and enforcement of the Convention in our countries and to working together to protect the fundamental values guaranteed by the Convention.

Mr Franck Riester, Minister Delegate for Foreign Trade and Economic Attractiveness attached to the Minister for Europe and Foreign Affairs

Mr Jean-Baptiste Lemoyne, Secretary of State for Tourism, French Nationals Abroad and Francophonie attached to the Minister for Europe and Foreign Affairs

Mr Clément Beaune, Secretary of State for European affairs attached to the Minister for Europe and Foreign Affairs

Mr Kostis Hatzidakis, Minister of Labour and Social Affairs and

Ms Taina Bofferding, the Minister for Equality between women and men