“Hands too small, can’t build a wall” chanted more demonstrators during US Vice-President Mike Pence arrived in Brussels to meet with EU leaders.

People of all ages and nationalities braved the cold to protest a man many find offensive due to his far right stances on abortion, sexuality and climate.

The protest, held this morning (20 February) was co-organized by Amnesty International and Lights for Rights.

“We want to show our solidarity and push for the European leaders to tell Mr. Trump and Mr. Pence that the measures they’re taking are unacceptable,” Philippe Hensmans, Belgian director of Amnesty International, said. 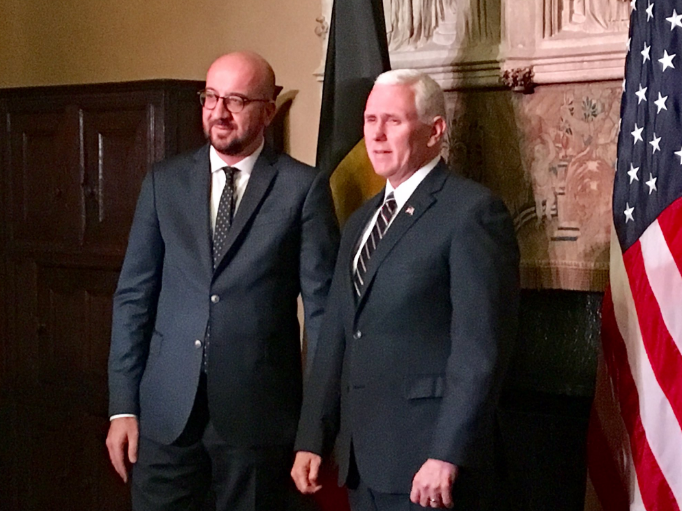 Asher Serrano, a 22-year-old student from Brussels, explained his reasoning for joining the protest was first and foremost to support the LGBT community.

Several Americans joined the protest to stand in solidarity with the country they once called home.

“As an American, I think it’s important to reiterate the fact that not everyone supports Trump. He didn’t win the popular vote. It’s quite scary what’s happening,” Jillian Mertsch, a 36-year-old from St. Louis, Missouri said.

Tom Donley, who hails Denver, Colorado moved to Europe shortly before the election because he was seeking a more inclusive environment.

“I think the United States is the pillar of democracy in the world and to see it crumble is very, very disappointing,” Donley said.

“America can do a better job in uniting the world and I’m very disappointed at the moment about Donald Trump and Mike Pence and our country, at the moment it’s complete chaos.”

Pence’s visit to the EU capital comes at the end of a tour, during which the vice president has attempting to ease apprehension about Donald Trump’s relationship with Europe.

Protesters made it clear that the Union has an obligation to step up during this time of uncertainty in America.

“The EU must continue cooperation with the American people,” Serrano said.

“I think it’s just their time to show that they’re stronger and that they can support us when we start to slip the wrong way just like we supported them 70 years ago,” Mertsch concluded.