Estonia now holds the EU Presidency. In your view, what is the current situation of the EU? Is it still in crisis?

At the moment, the European Union is in good shape. We constantly talk about various crises but the economy is growing, while elections in the Netherlands and France earlier this year showed that the situation is not so bad… In fact, we are in a good patch. We should make the most of it.

We should be proud of forming this European Union. It’s nothing to be ashamed of. Perhaps we should be making it clearer that without the EU all member states would be worse off. We should always keep that in mind.

What do you think of the Maltese Presidency, which recently ended?

Malta did a good job. We followed their work closely because it was clear that not all their work would be completed in time, so it would be passed on to us.

Overall though, I don’t think the EU presidency is about just a certain number of topics. It’s more about pushing issues forward. In the end, it is not important to finalise a block of issues, because all of us in the EU ultimately benefit.

Malta failed to create unity among member states on the European asylum system. Now it’s up to Estonia to pick up the baton. What can we expect from the next six months?

A reform of asylum law has to be implemented. EU countries have to act now. But we have to distinguish between asylum seekers and economic migrants. The problem is where to draw the line. All EU members have to deal with this.

I am aware that from the perspective of the Polish government, migration is not a matter for the European institutions but for national bodies. But we believe that the refugee issue should be resolved at European level. Economic migration is an even broader field. But it must be clear that filing legal complaints against the institutions, which is the case, will not stop the influx of migrants and refugees.

I honestly do not know what the solution is at this moment but Malta has worked hard to find one. The refugee issue is of high importance to the country. We will also do our best to find a solution.

One problem is that there are so many differences between EU countries. For example, Estonia agreed to take 500 refugees but only 165 have so far arrived, mostly from Greece because Italy refuses to allow our officials to carry out on-the-stop interviews. But, according to our national laws, we have to do this before we can accept refugees. So there are countless legal problems that have to be overcome.

Estonia is going to try and tackle the problem within countries of origin. That’s going to be a major task for the EU. But the Common Foreign and Security Policy (CFSP) is not within the scope of the Council Presidency. We can only provide guidance and try to simplify the problems.

But not all foreign policy issues are beyond the scope of the Presidency. Estonia has already cited the Eastern Partnership as a major priority. What can we expect in this area?

That’s true, the Eastern Partnership is definitely one of our priorities. There’ll be a summit on it, in Brussels instead of in Estonia because we want to underline that this is a European issue that affects the entire EU and not just “the eastern bit”.

Unfortunately, the final declaration of the Riga summit was not very clear. There are EU members that do not want to offer the Eastern Partnership countries any sort of clear accession perspective. Let’s be honest: we all know that these countries aren’t going to become EU members in the near future. But they should still have a certain perspective. In the absence of it, it’s difficult to provide incentives to carry out reform. 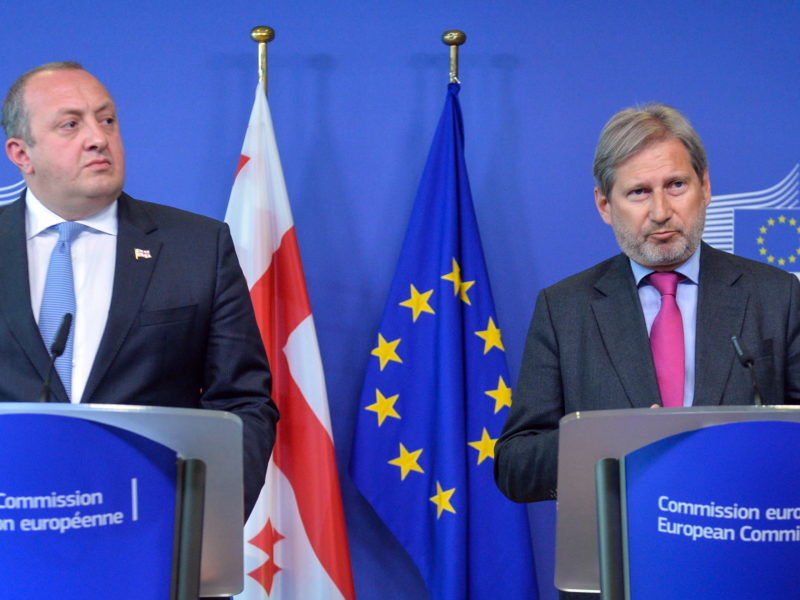 What about Russia? We can’t talk about the Eastern Partnership without considering Moscow.

Well, Russia, again, is a topic for the CFSP not the Presidency of the Council. Overall though, I can say that the EU is open to Russia and things are now in their hands. How do they behave? What’s happening in Eastern Ukraine? I am not very optimistic about what’s happening in Crimea but the issue has to remain on the negotiating table.

The Baltic States were occupied for half a century. We know how to play the waiting game. One day, there will be a solution. The most important factor is that this solution reflects the will of Ukrainians and is not one that is brokered over their heads.

On the subject of negotiations: the Brexit talks have just begun. The Commission is the one responsible but has the Estonian Presidency prepared anything?

Officially, Brexit is not one of our priorities, for one simple reason: it is already in progress. It’s not a priority because it’s our reality now and something we are going to have to accept. We hope that this first, very vague, part of the negotiations can be concluded. But we don’t know how the talks are going, of course.

Our principles are simple: citizens first, money after. We must first secure the rights of EU citizens in the United Kingdom and vice-versa.

We don’t want a quarrel with the UK. We also want a good, productive relationship with the country after Brexit. We certainly shouldn’t punish the UK out of revenge. That would punish millions of people that were and still are against Brexit. And we would ultimately only be punishing ourselves.

The ties we have in place are not going to simply cease when the UK leaves. They will assume a different form, at a different level, but they’ll go on. We will also continue to be NATO partners and will thus maintain common security interests.

Many of these issues will become clearer after Germany’s September elections. They will have a huge impact on the rest of the continent, because whether you like it or not, Germany carries a lot of clout in Europe.

Let’s look at security and defence policy step-by-step. A common defence fund could be a good idea if it’s opened up to all its members and not just the interests of the bigger members and large companies.

Permanent, structured defence cooperation: this can work if there is geographical proximity and interests. There are already such cooperative schemes in action in Scandinavia, in the Benelux countries, between France and Germany…

Overall, I think these issues should be addressed at EU level, in close cooperation with NATO. Member states should be a part of one army, which is then used for national, EU, NATO and international peacekeeping needs. We can’t decouple EU defence and security policy from NATO, but we could build a European pillar within NATO itself.

When it comes to military issues, both Estonia and Poland rank over the 2% target set by NATO. US President Donald Trump, despite his wording, is right when he calls on Europe to pay for its own defence. The continent has to work better together.