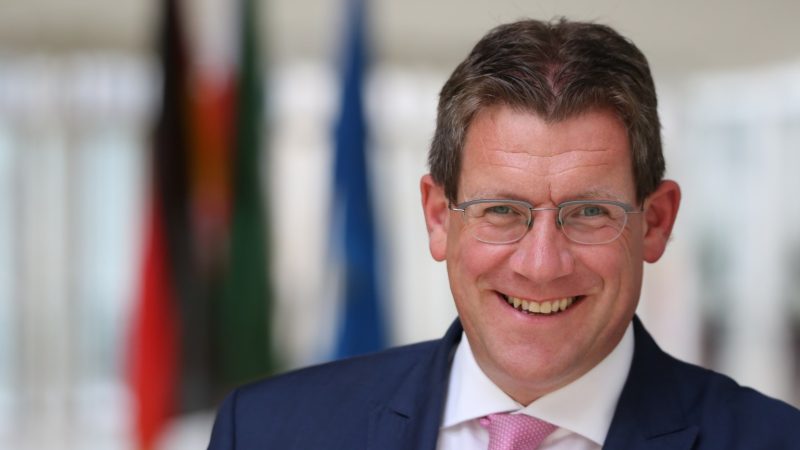 “I would argue that North Rhine-Westphalia is actually the transformation region in Europe and that we are undergoing the greatest structural change here,” Brockes, who also acts as the spokesperson of the liberal FDP for Industry and Energy in NRW, emphasised. [FDP/Dietmar Brockes]

The state of North-Rhine-Westphalia (NRW) has been at the epicentre of Germany’s industry for centuries. However, amid ongoing digital and green transition, the region aims to master structural transformation to stay competitive, Dietmar Brockes, Chairman of the Committee for Europe and International Affairs in NRW, told EURACTIV in an interview.

While many regions in Europe face the challenge of adjusting to the decarbonisation of their industries and leveraging the potential of new digital technologies, the industry-based state of NRW is particularly impacted.

“I would argue that North Rhine-Westphalia is actually the transformation region in Europe and that we are undergoing the greatest structural change here,” Brockes, who also acts as the spokesperson of the liberal FDP for Industry and Energy in NRW, emphasised.

However, the ongoing change also bear great potential for Germany’s most populous state.

“We must also set the path in such a way that it is achievable and that we can hold our own in global competition. And that’s why it’s important for me that we also rely on bridging technology,” Brockes stated.

Brockes emphasised the “role model function” of NRW as it is “the industrial state in Europe.”

“I don’t think there is any other place where more energy is produced and consumed at the same time,” Brockes argued.

From Coal to Renewables?

NRW has been Germany’s biggest producer of coal for decades. While the lion’s share of the state’s coal industry was rooted in hard coal in the nineties, NRW has already successfully switched to brown coal production.

“We have already successfully phased out hard coal mining, which is why we see the current structural change as a major opportunity and challenge,” Brockes emphasised.

The next big energy transition is already underway, as the German government plans to phase out brown coal by 2030 to reach its climate neutrality goal.

In mid-2021, the state government set the goal of 50% of its energy production from renewables. However, the path to the decarbonisation of electricity production is still rocky, as currently, only around 17% comes from renewable energy sources.

“Of course, this is a major challenge, but we also want to transform our industries accordingly through innovation,” Brockes said.

NRW aims to retain its “industry leadership in Europe” and develop into the “most innovative industry region in the world” by heavily investing in cutting-edge technologies that are carbon neutral and digitalised.

One of the critical elements of this transition is hydrogen. “For example, we want to switch to hydrogen-based steel production,” Brockes said. While this would entail being more reliant on hydrogen imports, Brockes stated that NRW aims at retaining its technological leadership “as we are currently having it in the most advanced coal-fired power plants.”

To make the green transition a success, NRW wants to tap into the potential of its highly skilled working force, which is currently working in the coal sector. “That’s why we need skilled workers. For this, we need the qualification of people who are already working in the energy sector,” he stressed.

The region is also closely collaborating with other European regions to share best practices. NRW is especially building on its partnerships in the so-called Weimar Triangle, including the Polish region of Silesia and the French Hauts-de-France.

“Especially Silesia is facing similar challenges regarding the structural change of its industries,” Brockes said.

However, NRW is also in close exchange with other regions and European networks; for instance, the Automotive Intergroup, which was launched by the Committee of Regions and provides a platform for discussing the future of the automotive industry between local and regional authorities.

Furthermore, NRW is also working on a new partnership agreement with Piedmont in Italy, which shares “similar industrial structures” with North-Rhine-Westphalia.

“These are all platforms where we are happy to be involved in order to promote exchange, and I like to see these intensified even further in the future,” Brockes concluded.

However, Brockes insists that NRW remains the model region for the industrial transformation.

“At the moment, I think that quite a lot of people look to us and copy and adopt things from us,” he emphasised.