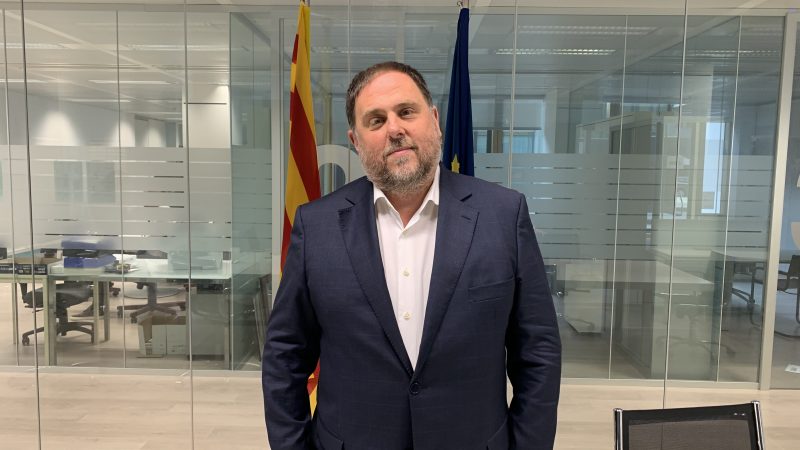 Oriol Junqueras, former Catalan vice-president and pro-independence leader who had been jailed for his role in Catalonia’s ilegal secession attempt, visited Strasbourg and Brussels on Tuesday and Wednesday (6-7 July), after being released from prison with a pardon from the Spanish government.

Junqueras had spent three years and eight months in jail, following the unilateral declaration of Catalonia’s independence in October 2017, a move that had pushed Spain into its most serious political crisis in decades. In an interview with EURACTIV.com on Wednesday, he advocated a negotiated solution to the problem between the Catalan and Spanish governments.

Were you sad after the Spanish national team lost against Italy on Tuesday?

I didn’t see the match because we were traveling from Strasbourg to Brussels. We have been busy over the past few days. My sympathy for Italy is very strong. My education is Italian. I have always studied in the Italian educational system. I have worked in the secret archive of the Vatican. My sympathy goes to all the national teams, and in this case to the Italian team.

You have just been released from prison. How did you change personally and politically?

I don’t detect many changes. I maintain my convictions in all senses, also my political principles, with deeply rooted democratic convictions. A lesson I learnt in prison is that there is a lot of human quality. It would be more useful for society if a majority of the people who are imprisoned were in training centres or work schemes.

This visit to Strasbourg and Brussels can be interpreted as a new effort to internationalise the conflict in Catalonia.

It should be interpreted as a sign of our internationalist and European commitment. We are Republicans, a center-left party that is part of the Green group in the European Parliament. As republicans, we are also pro-independence with respect to the relationship with the Kingdom of Spain, but at the same time we are federalists with respect to Europe. All of these positions are compatible.

You insist on holding a referendum in Catalonia. The Spanish government said that it will never take place. If there is no referendum, will you return to supporting the unilateral path towards independence?

We have always been committed to the path of dialogue and negotiation. If it has not borne fruit, it has not been for lack of our conviction. We are convinced that the best way to accompany other parties to a negotiating table is precisely to insist on the importance of negotiation. Any relevant political conflict will always require a multilateral solution, because it will affect multiple levels, and also in our case. We want a Catalan republic with the best possible relations with Spain, within the European institutions and the international community.

In short, do you rule out the unilateral way?

What I have said is that the solution to any relevant political conflict is always multilateral in nature.

This afternoon (Wednesday), you will meet with former Catalan president Carles Puigdemont for the first time since he fled from Spanish justice in October 2017 and came to Belgium. What is your relationship with Puigdemont?

Mine is very good. Always has been. I really want to meet again after so many years.

Has it bothered you that you have to go to Waterloo, after spending almost four years in prison, while he did not go to Strasbourg, where you were yesterday, and he is an MEP?

Visiting to share and talk does not bother me, but rather it gives me great pleasure, with anyone and wherever. I do it with delight.

Is there some rivalry between Barcelona and Waterloo [where Puigdemont lives]?

The two of you have defended different positions recently, for example on the issue of the pardons. What do you expect from the meeting this afternoon?

Something as simple as being able to say hello, share opinions and reflections. We have plenty of material to reflect on.