20 years of EURACTIV: Vestager says without free media there is no democracy 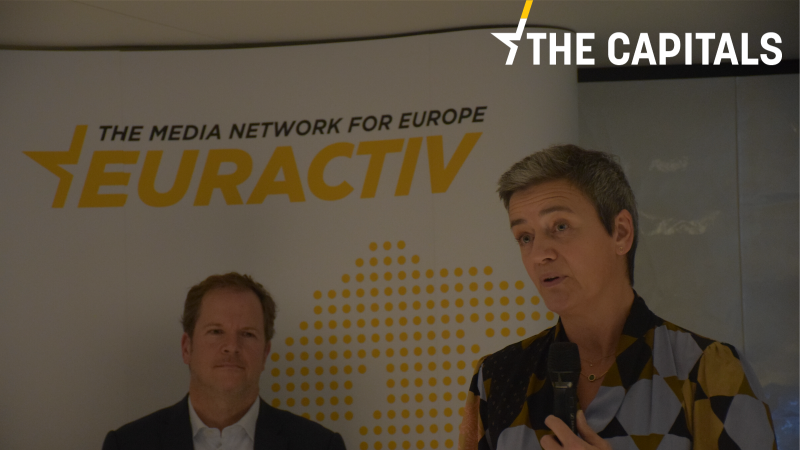 Vestager: "The point of being digital is to make the most of digital to create the societies that we dream of based on human welfare and freedom." [Photo by Sarantis Michalopoulos]

BRUSSELS. Without a free press public space will be muted and therefore, there will be no democracy, EU Commissioner Margrethe Vestager said yesterday (18 November) at an event to celebrate EURACTIV’s 20th anniversary.

“We need independent, unbiased and hopefully pro-European media because this combination is critical […] open and investigative press that works to convey a message,” said Vestager, Executive Vice President-Designate of the European Commission for a Europe fit for the Digital Age from 2019.

The Danish politician added that the point of her portfolio is not that we all become business and tech savvy.

“The point of being digital is to make the most out of digital to create the societies that we dream of based on human welfare and freedom,” she said.

“A Europe that is fit for the digital age means a Europe, where societies are really fit for citizens, the market is therefore for consumers, and technology for humans,” she added.

Referring to the “unorthodox vision on Europe in 2040” of EURACTIV’s journalists from The Capitals, she said EURACTIV appears to have free press as part of their DNA. “It may take a long time and it may not be characterised by one phone number of one strong man. But it may hold the promise of societies where you really want to live because they’re safe and free, and you can come together,” Vestager concluded.

EURACTIV Media Network for Europe is celebrating 20 years of free, independent reporting with European values at its core.

Put an end to the personal debate! Shortly before the start of CDU federal party conference in Leipzig, voices within the conservative party called for an end to the personal debate. Speaking to the newspaper Neue Osnabrücker Zeitung, the Prime Minister of Schleswig-Holstein, Daniel Günther (CDU), called on his party to return to work and not to make party colleagues “mad again and again”.

Günter said Söder had drawn the right conclusions and had clearly shown how the CDU/CSU could regain its former strength. “I think the CDU can currently learn a lot from the CSU,” he said. Instead, those who are sowing the wind will create a whirlwind and end up with a negative image similar to that of the current grand coalition, he said. (Claire Stam | EURACTIV.de)

Parties ask for support to coalition deal. “Do you support the agreement reached between PSOE and Unidas Podemos to form a progressive coalition government?” This is what party members of socialist PSOE and leftist Podemos are called on to answer following a coalition government deal between the parties last week aimed to end the current political deadlock in Spain.

Nevertheless, the two parties do not have a majority in the parliament. While members are casting their votes, acting Prime Minister Pedro Sánchez’s team is negotiating with other political forces in the chamber to ensure they have enough support for their executive to be confirmed. (Beatriz Rios | EURACTIV.com)

Assignment extended. Belgian King Filip has extended the mandate of informateur Paul Magnette (PS) to form a federal government until 25 November. In a press conference, Magnette acknowledged that “there are real and numerous difficulties” as there are still ten parties involved in the consultation and “everyone is aware that there is a difficult task ahead that will require political courage.” After there had been discussions of a possibly bold coalition attempt to break the coalition talks deadlock after the 26 May elections between the two biggest parties, Socialist PS and Flemish nationalist N-VA, the gap between both parties was described as a “Grand Canyon” over the weekend, leaving little hope for a quick decision.
(Alexandra Brzozowski | EURACTIV.com)

French in the UK not ready for Brexit. 75% of French citizens living in the UK are not ready for Brexit, a French Senate report has warned. French residents have to register online with the British Home Office before Brexit in order to obtain permanent residency status. But only a quarter (70,000 out 300,000) of them have completed the process.

“A large number of our compatriots […] continue to adopt a relatively wait-and-see attitude, and believe that the procedure may not be necessary,” said Jean-Pierre Grand, the Senator responsible for the report. But French citizens have to register, with or without a Brexit deal. In case of a deal on Brexit, French people should register before 30 June 2021 and in case of a no-deal scenario, they should do so before 31 December 2020. (EURACTIV.FR)

Extreme weather update. Venice, the lagoon city, tried to make a fresh start after the third day of ‘acqua alta’ (high water) and regain some normality after its worst flooding in 50 years. Meanwhile, also the European Culture Capital Matera in Basilicata region asked to declare a state of emergency with an estimated €8 million in damage caused by heavy rains and storms. Read more on EURACTIV’s partner ANSA.

Mitsotakis seeks solidarity. Greek PM Kyriakos Mitsotakis has asked regional governors to show solidarity and help relocate 4,000 people with a refugee profile inland by the end of November. “I can’t be fighting a battle and asking for solidarity from Europe when there is none among us,” EURACTIV’s partner Athens News Agency quoted Mitsotakis as saying.

Who should be the opposition leader? The latest poll by EURACTIV Poland’s media partner Gazeta Wyborcza, suggests that Borys Budka should become the leader of Civic Platform (PO/EPP), the biggest opposition party, which will hold internal elections in January. 30% of the respondents would vote for Budka, who was the frontrunner in the protests against the judicial reforms of the ruling PiS and has kept a high-profile in the parliament and the party ever since. Małgorzata Kidawa-Błońska, who was designated to lead the PO during the recent parliamentary elections, obtained 23%. Donald Tusk comes third with 11%, while the current leader of PO, Grzegorz Schetyna, got only 4%.

Meanwhile, PO struggles to effectively run primaries before presidential elections due to the lack of candidates as only Kidawa-Błońska has said she wants to run. (Łukasz Gadzała | EURACTIV.pl)

Slovak agriculture is recovering thanks to journalists. According to the representative of the Young Farmers’ Associations in Slovakia and thanks to the work of investigative journalists Ján Kuciak, who was murdered in February 2018, Slovak agriculture is recovering. Yet, Milan Jurky stated that agriculture subsidies have been more harmful than helpful to Slovak farmers than helpful. “The incentive of direct payments made Slovaks to be collectors of hectares. The more land you own, the more you get, regardless of the creation of added value in the countryside,” he added. (Marián Koreň |EURACTIV.sk)

Digital taxation. The Czech government has approved a 7% digital tax on the income of large internet companies, such as Facebook and Google. The new law should take effect in summer of 2020 and is estimated to bring annually around €200 million to the national budget. It still needs the green light by both chambers of the Parliament and the President. (Ondřej Plevák | EURACTIV.cz)

Bulgaria looks like a Latin American country. It is a country that meets the basic needs of its population but has controversial foundations for its well-being and does not expect very optimistic prospects for the future.

This is how Bulgaria looks like in the annual Social Progress Index, produced by the Washington-based non-profit organisation Social Progress Imperative. It collects data from 51 indicators on the state of a society – from access to toilets and housing to media freedom and quality universities – to show what the state and prospects of nearly 150 countries around the world are. In 2019, the authors ranked Bulgaria 43rd out of 149 countries in the index and 51st in GDP, measured in terms of purchasing power of the population. (Dnevnik.bg)

Painful anniversary. Croatia is commemorating the 28th anniversary of the fall of eastern town Vukovar, which symbolises the official beginning of the 1991 war. Croatian PM Andrej Plenković said the government will remain dedicated to resolving the issue of missing people, who have been lost after the fall of Vukovar. These people are believed to be captured, tortured or killed on a secret location by the Serbian military forces. “State institutions will not cease working until the issue is settled” said Plenković, calling on Belgrade to provide the data in its possession. However, Plenković dodged a journalist’s question on whether Croatia is going to block Serbia’s EU accession over this open issue.

Tusk to become new EPP leader. The outgoing EU Council president will be confirmed as the new EPP president at the party’s congress in Zagreb this Wednesday. Although he has not officially announced his victory yet, the Polish politician is the only candidate running for the seat. With the new leadership, the EPP will set an agenda for the future years, and it is expected to put climate change and the issue of the rule of law high on the list. (Tea Trubić Macan | EURACTIV.hr)

Vučić discharged from hospital in Belgrade. Serbia’s President Aleksandar Vučić was reported in a stable condition and was discharged from the Military Academy Hospital (VMA) for home treatment after having been in the hospital for three days due to cardio-vascular problems.(EURACTIV.rs)