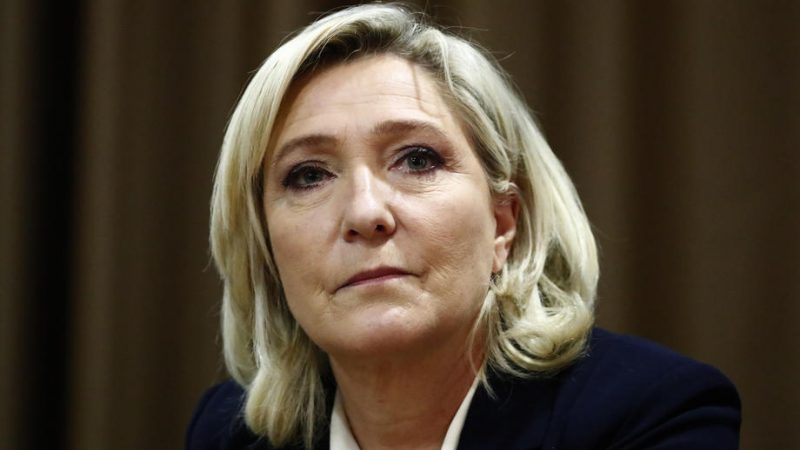 The violent protests that used to mark her travels have thus gradually disappeared, contributing to a smoother, more consensual and more cautious image. [EPA-EFE/GUILLAUME HORCAJUELO]

Three months before France’s presidential vote, Jerome Riviere made a blunt calculation: Marine Le Pen, long the leader of the traditional far-right, had lost her anti-establishment edge and veered too close to the mainstream to win the election.

He defected and rallied behind the campaign of Eric Zemmour, the writer-turned-presidential challenger whose nationalist agenda echoes the one-time aspiration of former U.S. President Donald Trump to “Make America Great Again”.

Riviere, who was Le Pen’s top lawmaker in the European Parliament before he jumped ship earlier this month, said Le Pen had become too soft on immigration and compromised the party’s tough eurosceptic stance with her tack towards the mainstream.

His defection illustrates how Le Pen’s strategy to make her party more acceptable to traditional centre-right voters alienates core supporters and has left her out-flanked further to the right by Zemmour’s burst into the political arena.

Meanwhile, conservative candidate Valerie Pecresse’s own talk on immigration, identity and security has toughened when political discourse in France drifts to the right. The result is that Le Pen, 53, is being squeezed from both sides.

Le Pen, Zemmour and Pecresse are all vying to win a second-round runoff spot in April’s elections. President Emmanuel Macron is currently leading opinion polls and expected to take the other runoff place.

Zemmour, who has been convicted several times for inciting racial hatred, describes France as a once-great nation now in steep decline, its Christian civilisation hollowed out by the growing influence of Islam because of uncontrolled immigration.

He subscribes to the “great replacement” theory under which France will, in time, be majority Muslim and on the verge of civil war. He wants France to seize control of its borders from Europe and says Mohammed should be banned as a first name in France.

Le Pen has denied drifting towards the centre. She has pledged to reserve family benefits for households where at least one parent has French citizenship and deport foreigners who have not worked for a year but says she will not be sucked into a race to the bottom by Zemmour.

“We have broken with the provocations of the past that have sometimes been the sin of our political family. We must refrain from returning to them,” Le Pen told reporters this week.

“This means there will be no one-upmanship nor outrageousness on my part.”

Part of the system

To be sure, Le Pen may yet make the second-round runoff in April. Voter surveys, though, show Pecresse polling level with her and that Zemmour’s own double-digit showing is inflicting the more significant damage on Le Pen.

Le Pen inherited from her father Jean-Marie Le Pen, a party that was founded as a nationalist, anti-immigration and anti-Semitic movement. She moved to detoxify the-then Front National’s image as a racist and xenophobic party.

She has softened her own anti-European rhetoric and – acknowledging it was not what the French wanted – dropped calls for a “Frexit” and for France to ditch the euro currency after Macron trounced her in the 2017 presidential vote.

More recently, she has backtracked on leaving the European Court of Human Rights and suspending France’s membership of the EU’s passport-free Schengen zone – both seen as moves to win the confidence of mainstream voters.

For Riviere, they were a step too far.

“Marine Le Pen is becoming a part of the system,” said Riviere, a staunch conservative among the ranks of the traditional centre-right party before he joined Le Pen in 2017.

Two other Le Pen allies have quit to join Zemmour’s ranks in the past two weeks. Riviere said more were poised to follow but did not provide any evidence for this.

A third election defeat would raise questions over Le Pen’s leadership of the Rassemblement National and over the broader shape of the French right.

“If indeed Le Pen repeats her past electoral failures, either she steps aside within the party…or there is a wider restructuring on the right,” said analyst Stephane Rozes.