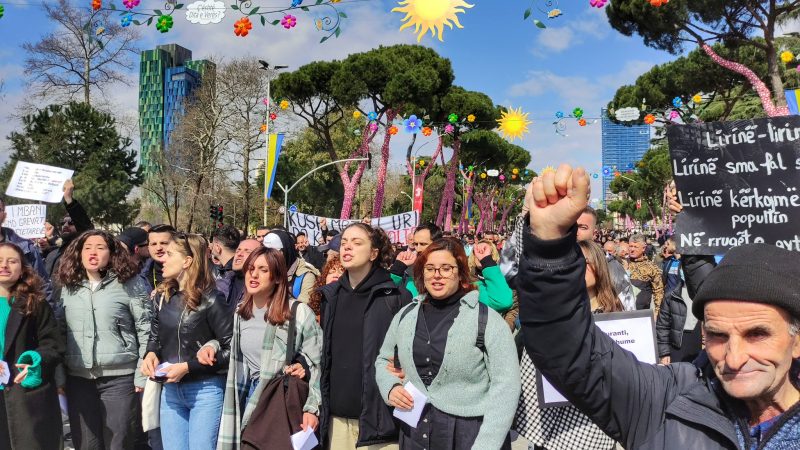 Citizens, however, say they are not protesting anything to do with Ukraine, but rather high taxes, corruption, and the capture of the state by “oligarchs”. [Alice Taylor]

Albanians should be ashamed as they are the only NATO member protesting the “consequences of war in Ukraine”, said Prime Minister Edi Rama as nationwide demonstrations continued for the fifth day.

Citizens, however, say they are not protesting anything to do with Ukraine, but rather high taxes, corruption, and the capture of the state by “oligarchs”.

During the last week, one of Europe’s poorest countries with a minimum wage of just €240 a month saw petrol prices rise to over €2 a litre, briefly the highest on the continent and 17th highest globally. Some 53% of this price is tax, and citizens have called for fiscal measures to protect their livelihoods.

In a statement on television, Rama said, “it is insulting for the dignity of this country” that people were protesting, and he felt sorry for protestors as they are tarnishing the international image of Albania. He said the world is in a war situation and that the protests are a “show of contempt” for those who are losing their lives.

But citizens disagree, and the past week has seen five days of non-partisan protests involving thousands of people in Tirana and other major cities.

A third of Albania’s population live below the poverty line. Low living standards and harsh economic conditions result in extremely high emigration rates and the highest number of asylum seekers in Europe.

Those protesting in Tirana on Sunday were clear that they believe the government is stealing from them and allowing ‘oligarchs’ to manipulate prices. They pointed to many corruption scandals involving public-private partnerships and hundreds of millions of taxpayers’ euros that have disappeared.

Citizens have also been clear that they support Ukraine, but that as a poor nation, they should not have to shoulder the economic burden. They pointed to increasing energy costs, high fuel prices, and increases in the price of basic food items such as wheat, meat, and fruit and vegetables.

Sunday’s crowd marched from Tirana’s central square to the prime minister’s office, chanting “criminal government”, “down with the dictator”, and accusing them of being in cahoots with an elite of wealthy business owners.

Another increasing bone of contention between the people and the state is the role of the police. In the latest in a long line of examples of police brutality, officers without badges or ID tags arrested dozens of peaceful protestors and detained them for 72 hours on Thursday and Friday.

For four days, Rama refused to budge on measures to help citizens and claimed that his government had nothing to do with the increase in prices. But the next day, he announced a price cap on fuel of €1.76 per litre, still exorbitantly high for many Albanians.

Rama eventually announced a package of measures worth €30 million for families in need, but activists say this is not enough to alleviate financial hardship for most of society.

There is public frustration that Rama has repeatedly tried to frame the protests as “against the consequences of Ukraine” while failing to address the persistent accusations of corruption and the capture of the state by oligarchs.

Pro-government media tried to frame the protests as being part of a Russian conspiracy to “destabilise the country”, without providing evidence. Blaming protests or criticism of the government on Russian influence is a common tactic used since communist times, despite the regime ending 30 years ago.