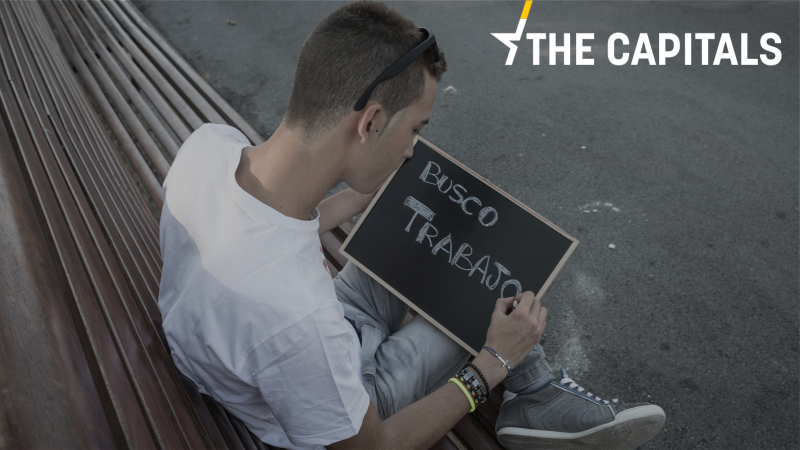 Young Spaniard writing 'I need job' in Spanish on a blackboard. [Shutterstock/Chanclos]

Before you start reading today’s edition of the Capitals, feel free to have a look at our exclusive interview with Portuguese Foreign Minister Augusto Santos Silva ‘Revamped EU-India link could re-balance China ties, Portuguese FM says‘.

The economic side-effects of the COVID19 pandemic in Spain have been devastating for the country’s vulnerable labour market as almost 623,000 people lost their job last year, according to fresh data released Tuesday by Spain’s National Statistics Institute (INE). Read more.

Travel restrictions are on their way, says Seehofer. After initially waiting for a European solution, Germany is going to ban travel from countries with high levels of infection from the mutated coronavirus, according to German Interior Minister Horst Seehofer (CSU). A decision on the matter is expected later on Friday. Read more.

France could go back into lockdown. “The curfew and all the measures are certainly useful but probably insufficient”, Health Minister Olivier Véran said during the now traditional government update on the health situation on Thursday evening, adding that the new variants should be considered “as new viruses requiring new measures to protect us”. Read more.

Restaurants association sets 1 March ultimatum. While so far the Belgian government has given no date for the reopening of the food and drink sector, an association of Belgium’s top chefs has said they want to reopen their restaurants on 1 March. Read more.

Luxembourgish MEP urged to leave European Parliament. Luxembourg’s liberal party DP wants to reclaim the seat of Monica Semedo (Renew Europe), its secretary-general Claude Lamberty told Le Quotidien. “No one can force her to resign, but in our view, it would be entirely appropriate for her to give the seat back to the DP,” he added. Semedo left her party on Tuesday evening after a 15-day suspension from her duties in Parliament, following allegations of “psychological harassment” by her assistants. (Anne Damiani | EURACTIV.com)

Italy’s government crisis enters second day of consultations. After President Sergio Mattarella received the delegations of former PM Matteo Renzi’s Italia Viva and Nicola Zingaretti’s centre-left Democratic Party (PD) on Thursday, Zingaretti said he supported the office of outgoing Prime Minister Giuseppe Conte. Meanwhile, Renzi said he was ready to help form a new government but would not commit to supporting Conte. Renzi added that Italy should ask for the funds from the European stability mechanism, which the outgoing government has always opposed.

Meanwhile, Renzi ended up at the centre of controversy for his intervention at the Future Investment Initiative organised in Saudi Arabia, where he praised the country as a possible cradle of a “neo-Renaissance”. Renzi receives up to €80,000 a year in compensation as a member of the board of the Future Investment Initiative Institute, a Foundation created by King Salman bin Abd al-Aziz Al Saud. (Daniele Lettig | EURACTIV.it)

Entrepreneurs had hoped the government would loosen the restrictions as the prolonged lockdown would expose owners to further losses. Many eateries have decided to go out of business because they are no longer able to stay on the market, or have gone into debt trying to maintain non-functioning premises. Although restaurants were allowed from 24 October to offer take-out or delivery to prevent the spread of COVID-19, most had to discontinue such operations due to insufficient turnover in sales. (Monika Mojak | EURACTIV.pl)

Nord Stream 2 has 50-50 chances of survival, says Czech MEP. So much has already been invested in the Nord Stream 2 project that trying to stop it will surely be complicated, MEP Evžen Tošenovský (ECR) told EURACTIV.cz in an interview in reference to the European Parliament’s attempt to stop the gas pipeline project. The chances of Nord Stream 2 currently continuing are 50-50, he added. Read more.

Hungary still most corrupt in Europe. For a third year in a row, Hungary shares the last place in the EU, alongside Bulgaria and Romania, as the EU’s most corrupt country, according to Transparency International’s corruption perceptions index published on Thursday. Ranking 68th overall, Hungary scored 44 of 100 on the 2020 index (100 being the least corrupt), meaning it dropped 11 points since 2012.

“No one takes Transparency International seriously in Hungary. They are totally in the tank for the political opposition because they are funded by [American-Hungarian billionaire] George Soros, who when it comes to corruption is hardly ‘Mr. Clean’,” Zoltán Kovács, the government’s international spokesman reacted on Twitter.

Moreover, Hungary will grant an emergency authorisation to all jabs that have been used to vaccinate more than one million people worldwide and which have received a permit in accordance with local regulations, Gergely Gulyás, the minister in charge of the prime minister’s office said on Thursday. Read more.

EU Commission to be informed of large-scale corruption. The European Commission will be informed about the €2.6 billion “black hole of corruption” in Bulgaria’s “Hemus” highway construction project, announced Hristo Ivanov, one of the leaders of the opposition coalition Democratic Bulgaria, which has no seats in parliament, who sent the signal to the Commission and to the Bulgarian authorities. Read more.

Croatia and Serbia, an ongoing love-hate relationship. Croatia demanded an apology from Serbia on Thursday after a member of a Serbian delegation referred to Knin – a town in the Adriatic hinterland that had been the seat of the Serb rebellion in 1991 – as “Serbian and occupied” and expressed hope that the Serbian flag would again fly over it. Read more.

The Left not satisfied with opposition coalition. The Left (Levica) has been a 100% constructive partner in the opposition Constitutional Arch Coalition (KUL) from the start, said the coordinator of the radical-left party Levica Luka Mesec in a statement before the national assembly, adding that things have, however, been dragging on. I am very dissatisfied with the way KUL has been working in recent days, said Mesec.

KUL nominated the president of the Pensioner’s Party (DeSUS), Karl Erjavec, as a candidate for prime minister though he did not have the 46 votes needed to overthrow the government. In the end, DeSUS MPs decided to remain a constructive opposition to both coalitions. Commenting on the situation, the daily Večer wrote that “a minority opposition can not overthrow a minority government.” (Željko Trkanjec | EURACTIV.hr)

Situation with Serbia’s inter-party dialogue unacceptable, says MEP Fajon. MEPs  Tanja Fajon (S&D, Slovenia) and Vladimir Bilčík had a clear mandate and the support of the European Parliament to be mediators in the dialogue between the authorities and opposition in Serbia, Fajon told an online session of the European Parliament’s Delegation to the EU-Serbia Stabilisation and Association Parliamentary Committee, which she co-chairs. Read more.

Croatia-BiH Southern interconnection project confirmed. The upper chamber of the parliament of the Federation of BiH (Croat-Bosniak entity) has passed the BiH-Croatia Southern Interconnection Act, which will enable the construction of a new gas pipeline to connect the two countries and secure a stable gas supply.

The project is worth €100 million, of which around €20 million comes from the EU’s fund for the Western Balkans. Work on the project is expected to start in 2023 and the pipeline should be put into operation by the end of 2024. (Željko Trkanjec | EURACTIV.hr)