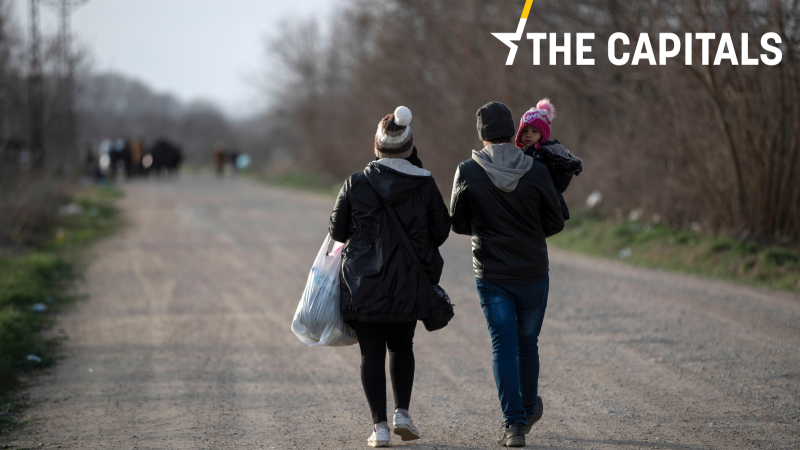 Before you start reading today’s edition of the Capitals, feel free to have a look at the article written by Beatriz Rios Commission continues with EU minimum wage push, using coronavirus momentum and Sam Morgan’s story on 24 countries sign pledge to boost international rail routes.

Also feel free to have a look at Alexandra Brzozowski’s article on whether COVID-19 has increased the threat of bioterrorism in Europe.

Now that many European countries have started lifting lockdown measures and opening borders, make sure you stay up to date with EURACTIV’s comprehensive overview, which is regularly updated with the help of our network of offices and media partners. Also, check our country update pages, such as the one for Ireland or Slovenia.

New migration crisis at the land border? Greek media reported last night that approximately 6,000 migrants have gradually gathered at the Greek-Turkish border of Evros raising concerns in Athens that Ankara intends to repeat the events in late February, when it allowed thousands of migrants enter EU territory. Sarantis Michalopoulos has the details.

Berlin’s airport saga continues. After initial announcements that the capital’s Tegel airport would close permanently as of 15 June, it turns out it won’t be closing so soon after all. With the return of air travel, passenger numbers have been increasing, meaning Berlin’s two airports, Schönefeld and Tegel, will both be needed until the latter’s final closing day on 8 November.

In other news, after two days of talks, the governing coalition of CDU/CSU and SPD agreed late Wednesday evening on an economic stimulus package with a total volume of €130 billion, Chancellor Angela Merkel announced after 21 hours of negotiations between coalition leaders. (Sarah Lawton, Tim Steins | EURACTIV.de)

Austria opens borders to all countries, except Italy. Travellers coming from Germany, Liechtenstein, Switzerland, Slovakia, Slovenia, the Czech Republic and Hungary will no longer have to go through border controls as of Thursday (4 June).

But “the numbers do not allow this for Italy”, foreign minister Alexander Schallenberg said on Wednesday (3 June). Still, he emphasised that Italy’s situation had been improving and Austria’s southern borders may also open following next week’s evaluation. (Philipp Grüll | EURACTIV.de)

Lockdown exit and return to ‘new normal’. Belgium is set to enter Phase 3 of deconfinement measures next Monday (8 June), with the reopening of hotels, bars and restaurants, extended social life and eased tourism restrictions, the National Security Council (CNS) said on Wednesday (3 June). Alexandra Brzozowski has all the details.

Supplemental budget aims at the future. Finland’s government agreed on a €5.5 billion addition to its budget on Tuesday (2 June) focusing on basic public services, education and green transport infrastructure.

However, while the opposition deems some measures justifiable, it accused the government of reckless spending. Read more.

Questioning the country’s COVID-19 strategy. Swedish state epidemiologist and the face of the country’s pandemic strategy, Anders Tegnell, said that he is having second thoughts about how his country has been dealing with the COVID-19 pandemic. But why the sudden change of heart? Pekka Vänttinen had a closer look.

Rome criticises Vienna for closing border with Italy. Italian Foreign Affairs Minister Luigi Di Maio has expressed his disapproval of the Austrian government’s decision to keep the border with Italy closed. “Individualism goes against the community spirit and harms both, Europe and the Single Market”, he was quoted as saying after a meeting with his staff. However, the minister remains confident that the situation will evolve positively for Italy in the next few days.

Meanwhile, Italy’s regions re-opened their internal borders on Wednesday (3 June). For the first time in over two months, citizens are able to move between regions without a self-certification form. This has caused problems in some cities, with Milan experiencing crowding problems at stations and dense traffic being reported on highways, especially near the border with France and Monaco. (Alessandro Follis | EURACTIV.com)

Parliament approves final ‘state of alarm’ extension. Spain’s parliament gave the government its approval on Wednesday (3 June) to extend, for the last time, the country’s ‘state of alarm’, meaning it would be in force until 21 June, EURACTIV’s media parter EFE reports.

Post-COVID national plan to be approved. The Portuguese government will approve a national plan Thursday (4 June) to respond to the social and economic crisis caused by the pandemic. The Portuguese Economic and Social Stabilisation Programme will include measures to boost educational opportunities, including higher education, and to increase young people’s access to employment and housing, Prime Minister António Costa said on Wednesday (3 June). (Pedro Morais Fonseca, Lusa.pt)

In other news, Portugal’s leading anti-corruption campaign group said that “Portugal does not have a national strategy against corruption”. The country is on a list of 15 countries with low levels of compliance with anti-corruption recommendations for MPs, judges and prosecutors at the end of 2019, according to a report released yesterday by GRECO, a Council of Europe body that combats corruption. (Fernando Carneiro, Lusa.pt)

New election date announced. Parliament Speaker Elizabeth Witek announced the new date for  Poland’s presidential election would be 28 June, despite it having been initially scheduled for 10 May. Besides, voting will take place in-person in polling stations, although voting by mail will still be permitted for those in isolation or quarantine. EURACTIV Poland’s Łukasz Gadzała looks into the details.

A divided V4. The Visegrad Four group should find a joint position on Europe’s planned post-COVID-19 recovery fund, Czech and Slovak PMs, Andrej Babiš and Igor Matovič, told media in Prague on Wednesday (3 June). Czechia and Hungary disagree with the current shape of the EU’s recovery plan’s, while Poland and Slovakia support it. The four PMs will discuss the issue at the V4 summit in Czechia on 11 June. (Ondřej Plevák | EURACTIV.cz)

Green, but not green enough. The Hungarian parliament passed two laws on Wednesday (3 June) that codify the 2050 carbon neutrality target and establish climate change to be one of the most important issues of our time.

However, the opposition did not vote for the bills despite having submitted the original drafts themselves, Index reported. That is because lawmakers claimed the ruling Fidesz majority had amended the proposals too much, watered down its targets and hollowed out the original text, by taking out green subsidies for instance. While the initial bill proposed by the opposition called for the declaration of a climate emergency, the version that was passed only concerns climate protection. (Vlagyiszlav Makszimov | EURACTIV.com)

Slovakia´s recovery priorities. The extra funds from the EU´s recovery plan (‘Next generation EU’) should be spent on e-government, adapting the changing automotive industry on which Slovakia heavily depends, the flexibility of the labour market, climate-friendly measures and regional transport and mobility, the Vice-Prime Minister for Investments and Informatisation Veronika Remišová (For The People) has said. Comprehensive healthcare reform is also a pressing issue, she added. (Zuzana Gabrižová | EURACTIV.sk)

Lifting lockdown measures. All restrictive lockdown measures will be lifted in Bulgaria on 15 June, Prime Minister Boyko Borissov announced on Wednesday (3 June), adding that after that date only social distancing measures will remain in place. The PM also admitted that many measures approved during the pandemic were not very well thought out, like the mandatory wearing of masks indoors, coupled with allowing restaurants to open.

On Wednesday (3 June), Bulgaria reported 22 new COVID-19 cases, of which nine were medical staff and two were children below the age of 2, who do not need hospital treatment. (Krassen Nikolov | EURACTIV.bg)

In other news, Slovenia has deployed over 1,000 additional police officers along the Croatian border because of the increase in migrant flows along the Balkan route over the past two weeks, Deputy Police Director Joze Senica told reporters on Tuesday.

Slovenia plans to boost defence investment. Defence Minister Matej Tonin, who inspected troops during a military exercise on Wednesday (3 June), said his ministry plans to invest €780 million in the Slovenian Army over the course of the next six years with a new law on investments in defence. President Borut Pahor said this would ensure that the army “remains the military pillar of Slovenian security”.

In other news, parliament’s Judiciary Committee has drafted amendments to the Penal Code which would increase penalties for organisers of human smuggling from five years in prison to up to 10 years. (Zoran Radosavljević | EURACTIV.com)

In other news, Vučić announced Pristina would lift taxes and other restrictions for dialogue to continue. In reaction to an announcement by the EU’s Special Representative Miroslav Lajcak that talks between Serbia and Kosovo might be resumed in June, Vucic said that Belgrade was always interested in negotiations, but that Pristina should first lift taxes and other restrictions hampering the flow of goods and people. Read more here.