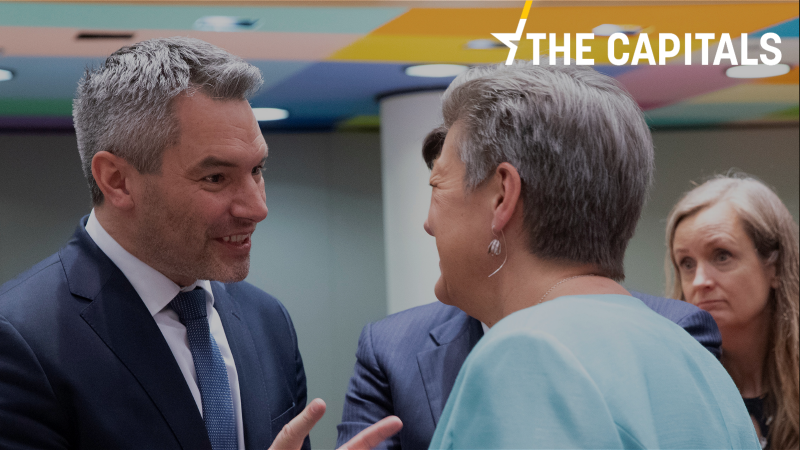 Austria's interior minister Nehammer criticised Johansson, who did not attend the conference due to time constraints, for not focusing enough on stabilising the region surrounding Afghanistan. [European Union/European Council]

Austria’s interior and foreign ministry hosted a security conference with the Central Asian states Uzbekistan, Tajikistan and Turkmenistan together with the migration ministers of Greece and Denmark, as well as the German interior secretary on Monday to discuss the further strategy in Afghanistan, effectively asking its neighbouring countries to manage migrations flows and prevent a potential migration crisis. Read more.

End of ‘whatever it takes’ for the French economy. France will abolish support measures for businesses on 30 September and introduce a new compensation scheme from October for the sectors still affected by the health restrictions, covering 70-90% of the fixed costs not covered by revenue, Economy Minister Bruno Le Maire announced on Monday. Read more.

Brussels tourism sector in peril after ‘disastrous’ summer. The Brussels tourism industry has suffered one of its worst summers on record as the ongoing health crisis, coupled with the terrible weather, has led to foreign tourists shunning the capital. As a result, representatives of the sector have called on the federal government to extend temporary unemployment measures. Read more.

Finland set to ban therapies aimed at converting gay and transgender people. A citizens’ initiative to ban sexual orientation and gender identification conversion therapy is moving forward to being considered by parliament after it gathered the needed 50,000 signatures within only a month. Read more.

In mid-August, a Moscow court ruling banned her from taking part in mass events and from leaving the capital region. Earlier in August, Navalny’s attorney, Lyubov Sobol, also left Russia. No statements from Finnish authorities had been made by Monday evening. (Pekka Vänttinen | EURACTIV.com)

Estonia needs a second ballot to elect a president. Alar Karis, the only candidate nominated in Estonia’s presidential election has failed to get the votes in the parliament needed to become the republic’s ceremonial president. Read more.

COVID-19 further aggravated Italy’s plummeting birth rate. The pandemic aggravated the declining birth rates in rich countries, with Italy seeing the sharpest decline in 2020. There were 16,000 fewer births and the country saw its birth rate reduce by 9.1%, according to a study of the Bocconi University of Milan published in PNAS magazine. Read more.

EU subsidies may stop flowing to Czechia. The European Commission has warned that it may put a halt on sending subsidies to the Czech Republic if the country does not improve its check of conflict of interest and provision of subsidies for the firms from trust funds, Czech radio station iROZHLAS reported on Monday. Read more.

Complaints to Hungarian media authority skyrocket in wake of LGBTQI law. Since the adoption of the controversial law banning the portrayal of LGBTQI content to minors, the number of citizen complaints received by the national media regulator has increased nearly sevenfold, Telex reported via Magyar Hang. Read more.

Slovakia welcomes second evacuation flight from Afghanistan despite opposition. The Slovak government evacuated 28 people with direct links to the country despite warnings from the Chairman of the National Council and leader of the second-largest governing party, Boris Kollár, insisting his party would not allow for more Afghans to arrive in Slovakia. Read more.

Bulgarian authorities come into conflict over COVID-19 restrictions. Bulgarian health authorities are proposing a serious tightening of restrictions at the start of the fourth wave of the pandemic, but are facing opposition from the caretaker government and the party with the largest parliamentary group – ‘There is such a people (ITN)’. Read more.

Army spokesman Marjan Sirk said the eight-member family of the man was already in Kabul. “There have been several attempts to get them to the airport but we failed,” he said. “We are in contact with almost all neighbouring countries and almost all partner countries we have cooperated with,” said Sirk. The family has been offered several options, the final decision will be theirs. (Sebastijan R. Maček | STA)

Kosovo leaders welcome first Afghan refugees. A total of 111 people arrived from Kabul Sunday evening, the first of some 2,000 in total, who will be temporarily housed in the country for up to a year, Kosovo Interior Minister Xhelal Svecla has announced.

“When it comes to humanitarian issues, and when it comes to partners and allies such as the US and NATO, the question is not why, but how. So, all the issues we are discussing are of a technical and logistical nature,” Prime Minister Albin Kurti said. On Monday the United States delivered 55 five armoured security vehicles as part of an American donation to the Kosovo Army. (Željko Trkanjec | EURACTIV.hr)