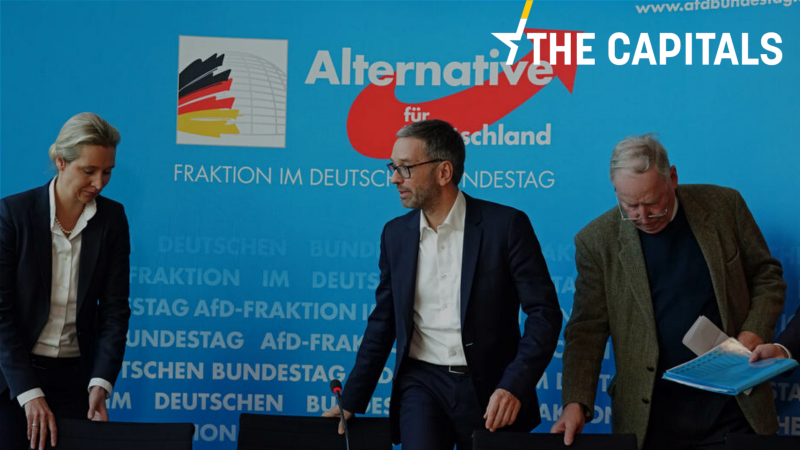 Meanwhile in Helsinki, a synagogue and flag have been vandalised. [EPA/ALEXANDER BECHER]

Before you start reading today’s edition of the Capitals, we invite you to read our Special Report on “Sustainable food systems in the Farm to Fork strategy“.

Also, take a look at the report from the Arctic by EURACTIV’s Alexandra Brzozowski on how a new ‘Arctic paradox’ emerges in Europe’s High North, as economy and ecology seek balance

What could have brought both parties together? EURACTIV Germany’s Philipp Grüll reports.

Meanwhile in Helsinki, a synagogue and flag have been vandalised. President Sauli Niinistö, who, on Holocaust Remembrance Day travelled to the Auschwitz-Birkenau death camp, received news from Finland that the synagogue in Turku had been vandalised with large amounts of red paint, while small neo-nazi group ‘Towards Freedom’ (an offshoot of the banned Nordic Resistance Movement) torched an Israeli flag in Tampere. The president described these incidents as “very worrying” and something that might suggest “broader racism” in Finnish society.

First case of coronavirus confirmed. A 33-year-old man in Bavaria is suspected to have contracted the virus from a Chinese colleague in what is Germany’s first case of coronavirus, the health ministry confirmed yesterday (28 January). According to official reports, he is currently isolated in a hospital in Munich and is in good condition. Although officials state that there are no other suspected cases thus far, this case is said to be the first incident of human-to-human transmission in Europe. EURACTIV Germany’s Sarah Lawton has the detail.

Can violence be part of democracy? An initially peaceful demonstration of firefighters on Tuesday (28 January) ended in clashes between the firemen, many of which were armed, and the French reserve of the national police commonly known as CRS. Violent demonstrations have increased in recent weeks.

EURACTIV France reports on what the country’s former justice minister, Robert Badinter, had to say.

In other news, the EU is helping France repatriate its citizens from China. France has asked the European Commission to activate the Civil protection mechanism to provide consular support to EU citizens in Wuhan, China, the town of the coronavirus outbreak. The EU will take part in financing the planes that are set to take off Wednesday (29 January) morning and later this week from Wuhan to France. (EURACTIV.FR)

A never-ending story? With 248 days of Belgium without a government since the federal elections and continued stalemate, the King has decided to give federal informants Georges-Louis Bouchez (MR) and Joachim Coens (CD&V) yet another chance to work a miracle until 4 February. The extension of their assignment was a big surprise to both, as they arrived at the meeting empty-handed. EURACTIV’s Alexandra Brzozowski digs deeper.

Indy-ref two? The Scottish parliament is set to vote in favour of a new referendum on independence on Wednesday (29 January), paving the way for a new constitutional showdown with Boris Johnson’s Conservative government in Westminster. Benjamin Fox has more.

Sinn Féin election pledge. The republican Sinn Féin party has pledged a series of ambitious reforms ahead of next week’s general election. EURACTIV’s Samuel Stolton looks into the party’s proposals.

Spain to repatriate nationals from Wuhan. The Spanish government confirmed on Tuesday  (28 January) that it is in contact with French and British authorities to coordinate the repatriation of several dozen nationals trapped in Wuhan as a consequence of the coronavirus outbreak. The European Commission has activated the EU Civil Protection Mechanism to provide consular and financial support to bring these ‘trapped’ EU citizens back home following France’s request.  (Beatriz Rios | EURACTIV.com)

Airbnb crackdown. Two MPs from the centre-left Democratic Party (PD) tabled a proposal to regulate apartment rentals for short periods of time through online platforms like Airbnb. If the amendment passes, municipalities will be asked to grant specific licences to those who rent more than three rooms to tourists. The number of licences issued per year will be capped, while the length of stays will be limited.

In other news, Italian President Sergio Mattarella hailed the European Commission’s efforts in promoting the circular economy. “The EU is emphasising the re-use of second raw materials and of the sustainable economy very effectively, giving an exemplary direction to the whole international community,” he said. (Gerardo Fortuna | EURACTIV.com)

Jourová in Poland. EU Commission for values and transparency, Věra Jourová, started her two-day visit to meet state officials in Poland yesterday (28 January). But will she be able to sway Polish authorities when it comes to the government’s controversial reforms? EURACTIV Poland’s Łukasz Gadzała and EURACTIVcz’s Aneta Zachová look into it.

In other news, the data retrieved from the cell phone of Slovakian businessman Marián Kočner, who is accused of ordering the murder of journalist Ján Kuciak, revealed that the Speaker of Parliament Andrej Danko (SNS) was in close contact with Alena Zsuzsová, the woman who is also charged with ordering Kuciak´s murder. (Zuzana Gabrižová | EURACTIV.sk)

Monetary policy unchanged. At its meeting on 28 January 2020, the Monetary Council of  the Central Bank of Hungary (Magyar Nemzeti Bank (MNB) decided not to change the Central bank base interest rate – it stayed at 0.90. But what about inflation?

Hungarians also request to be evacuated from China. Seven out of the eight Hungarian citizens currently in the Hubei province, in which Wuhan, the city where the virus broke out is located, have requested evacuation, Foreign Minister Péter Szijjártó has said at a press conference. Vlagyiszlav Makszimov has more.

Migrants at the border. A group of 50-70 migrants broke the barbed-wire barrier on Serbia’s border with Hungary in an attempt at to reach the Hungarian side, RTS reported. Several members of the group who entered Hungary were arrested while police prevented others from getting through. Serbian police said later they had arrested 37 people for trying to cross the frontier illegally. In recent months, Hungarian authorities said that the number of migrants coming through the Balkans and trying to enter Hungary has noticeably increased. (EURACTIV.rs, Željko Trkanjec | EURACTIV.hr)

Investigation against the president. Taped conversations made while eavesdropping on the commander of the Air Force general Tsanko Stoykov that suggest President Rumen Radev might have committed a crime had been published by the prosecutor’s office. This comes after Prosecutor-General Ivan Geshev asked the Constitutional Court to interpret the constitutional possibility of investigating the president who has immunity from prosecution.

Scepticism about the European Green Deal. Prime Minister Boyko Borisov is sceptical that adopting the European Green Deal will increase funding for environmental policies. “The Green Deal is no longer being discussed. It will enter into force despite the efforts of Poland, the Czech Republic and ours,” Borisov said, adding that “they probably won’t give more money” and other European programmes will be reduced. (dnevnik.bg)

Even larger than expected. Romania closed 2019 with a budget deficit that reached 4.6% of  its GDP, far higher than what was predicted in a budget revision just two months ago. Lower than predicted revenues, as well as the sharp increase in expenditure in the context of pay rises for public workers and increased pensions, have been blamed.

In other news, the parliament adopted a law yesterday (28 January) that eliminates so-called “special pensions”. The law would affect the “special pensions” of MPs and other categories of public workers but not the pensions of the military and police, despite them receiving more than 90% of the total special pensions. As the change will have little impact on the budget, the law appears to be more of a populist statement, which may even be repealed by the Constitutional Court, which decided in the past against the abolition of special pensions for magistrates. (Bogdan Neagu, EURACTIV.ro)

MPs in a panic trying to form the new government.  President Borut Pahor will consult with political parties today to have a clearer picture of the future political moves in Slovenia. While the presidents of DeSUS and NSi are advocating snap elections and most of their MPs are working to form a new coalition, 60% of the general public want new elections as soon as possible, according to a survey conducted by daily Dnevnik.

What would the outcome of a snap election look like? EURACTIV Croatia’s Željko Trkanjec has some predictions.

Definitely resignation. “I have chosen to terminate cooperation with Health Minister Milan Kujundžić. Health is a portfolio that needs a clear focus and a plan, especially during an EU presidency and at times when the coronavirus presents a threat for the whole of Europe,” announced PM Andrej Plenković at the beginning of the conference organised by EURACTIV’s media partner Jutarnji list. Tea Trubić Macan digs deeper.

Agricultural cooperation between Croatia, BiH and Montenegro. Officials of Karlovac County and the municipality of Velika Kladuša, Bosnia and Herzegovina, met in Duga Resa to negotiate their cooperation on a project for the long-term development of agricultural production in BiH, Montenegro and Croatia, which will be co-financed through the EU’s INTERREG programme. (Željko Trkanjec | EURACTIV.hr)

PM calls for consensus on Law on Freedom of Religion. Prime Minister Duško Marković called Metropolitan bishop Amfilohije from Metropolitanate of Montenegro and the Littoral for talks on its recently adopted Freedom of Religion Law, stating that the bill had entered into force and deadlines for its implementation are coming. The PM noted that the government is ready to find solutions regarding the contested articles by eliminating, through dialogue or consensus, any doubt regarding the use of churches, temples and monasteries. (Željko Trkanjec | EURACTIV.hr)

No mediation. Embassies of France, Germany, Italy, the UK and the US in Kosovo issued a statement explaining that they will not engage as mediators in talks between election winner Vetevendosje (VV) and the Democratic League of Kosovo (LDK) on forming a new government. But what prompted these states who are members of the so-called ‘Quint’ to make such an announcement? EURACTIV Croatia’s Željko Trkanjec has more.