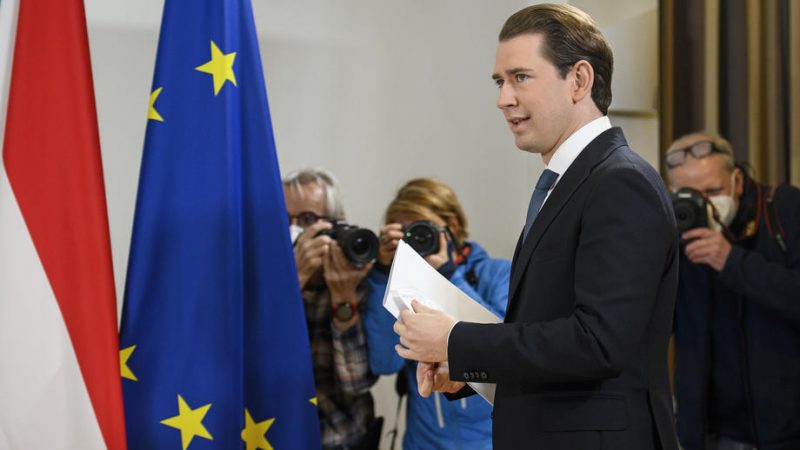 “It was an incredibly intensive time,” Kurz said in his resignation speech. At the end of his career, he “almost had the feeling of being hunted,” he said. [CHRISTIAN BRUNA/EPA]

In October, Kurz stepped down as chancellor over allegations of bribery and breach of trust. Alexander Schallenberg took his place, but Kurz was suspected of pulling the strings behind the scenes, being dubbed Austria’s ‘shadow chancellor’. Kurz’s further detachment from power is set to create months of turmoil in his own party.

“It was an incredibly intensive time,” Kurz said in his resignation speech. At the end of his career, he “almost had the feeling of being hunted,” he said.

His passion for politics has dwindled in recent months, and his “flame got a little tinier,” the former chancellor said.

While he claimed that he “has done nothing wrong,” he said he did not always manage to live up to his own expectations. “I am neither a saint nor a criminal,” he emphasised.

His resignation caused a stir within his own conservative party – the ÖVP – who always stressed that Kurz would return as chancellor once he was cleared of corruption allegations.

Now that Kurz is gone, many heads are expected to roll, and the cabinet is likely to be reshuffled. Even the position of chancellor is open for debate, with current interior minister Karl Nehammer expected to assume the role.

While Alexander Schallenberg was only inaugurated as chancellor less than two months ago, it seems like his days are already numbered.

According to government sources seen by the Austrian newspaper der Standard, the current interior minister Karl Nehammer will replace Schallenberg as chancellor and Kurz as leader of the conservative ÖVP.

Schallenberg would then return to his old job as foreign minister.

Nehammer has made himself a name in European capitals for his tough stance on migration and his call on the European Commission to introduce stricter controls at the EU’s external borders.

If Nehammer were to switch to the chancellery, current minister for European affairs, Karoline Edtstadler is considered the most likely candidate for taking over the interior ministry.

But there are other names on the list of ministers who could be set to exit their positions in the coming days.

According to the Austrian broadcaster ORF, finance minister Gernot Blümel – who also stands accused by Austrian anti-corruption authorities – would have to step down. Blümel has always been one of the closest allies and friends of Kurz. With Kurz gone, he is also losing his strongest supporter in the party.

On the other hand, the Austrian newspaper Kurier claims that the minister of economic affairs, Margrete Schramböck, will also have to resign. However, the regional division of the ÖVP Tyrol, where she has the strongest support, is trying to avoid it.

What the future Austrian ministerial cabinet will look like will be decided in the coming days.