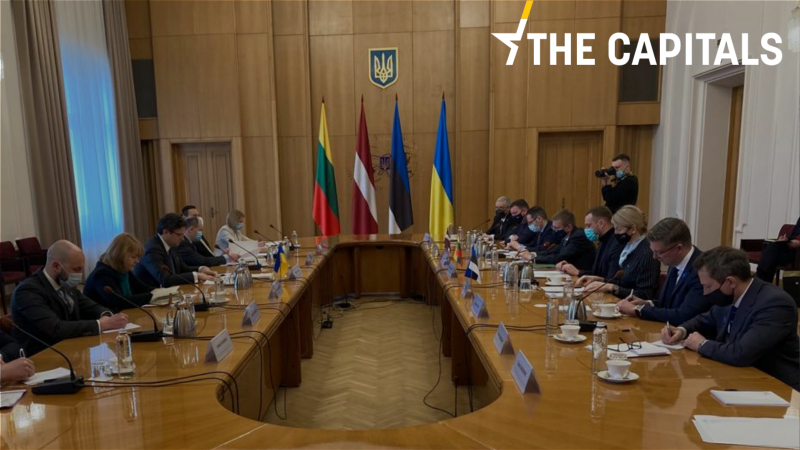 Before you start reading today’s edition of the Capitals, feel free to have a look at the in-depth analysis Michel silent over unofficial document mulling border changes in Western Balkans by Alexandra Brzozowski and Vlagyiszlav Makszimov.

High-level Conference Climate Science from Space: Synergies for a greener innovation economy: With the participation of the European Commissioner Mariya Gabriel and the Portuguese Minister for Science, Manuel Heitor, this conference will help building bridges to link space and climate ecosystems, by showing how space-based systems can improve daily life and contribute to the European Green Deal. More here.

Foreign ministers of Estonia, Latvia, and Lithuania visited Kyiv on Tuesday to show solidarity amid the Russian military build-up around Ukraine’s borders.

“Red lines” should be drawn, the Baltic ministers said, as they stressed that the EU should be prepared to impose further sanctions on Russia due to its aggressive actions in the region.

However, some member states are increasingly voicing concerns over the anticipatory stance of the EU’s policy and whether Brussels is ready to keep their diplomatic promises if the situation escalates further. Read more.

France to decide whether to allow widespread retention of connection data. France’s Council of State, the country’s highest legal entity, is meeting on Friday to decide whether to allow the widespread retention of connection data, despite the EU Court of Justice in Luxembourg having already ruled against the practice several times. Read the full story.

Belgian mayors mull to revolt over terrace openings. Several Belgian mayors had announced on Thursday they would reopen their terraces before 8 May as they would no longer have the means to prevent hospitality owners from opening their businesses. Read more.

City of London Brexit hit worse than expected, says study. Over 400 financial firms in Britain have shifted activities, staff and a combined trillion pounds in assets to hubs in the European Union due to Brexit, with more pain to come, a study from New Financial think tank said on Friday. Read more.

The agreement was reached in a series of meetings on Thursday aimed at putting relations on a “constructive” footing after a difficult start for the North’s post-Brexit arrangements. (EURACTIV.com)

Italy’s right not united on confidence motion against Italian health minister. Italy’s Northern League will not be supporting a no-confidence motion against Health Minister Roberto Speranza, Riccardo Molinari, leader of the League group in the Chamber of Deputies said on Thursday, despite his party having criticised the health minister almost daily for the way the pandemic has been managed until just a few weeks ago. Read more.

In other news, the Italian cabinet approved on Thursday a new €40 billion economic aid package, which will drive the deficit to 11.8% of the GDP in 2021, and public debt to 159.8% of GDP, the highest value ever. (Daniele Lettig | EURACTIV.it)

Poland’s top court ousts ombudsman in rule of law standoff.  Poland’s Constitutional Tribunal has ruled that an article of the Commissioner for Human Rights Act is unconstitutional, meaning Ombudsman Adam Bodnar – who repeatedly pointed out the government backsliding on the rule of law, freedom of the press, and democratic values – will have to vacate his post within three months.

Parliament’s lower house known as the Sejm spared no time in electing PiS MP Bartłomiej Wróblewski to be the new ombudsman, though this still needs to be approved by the Senate. Read more.

Zeman calls withdrawal from Afghanistan ‘a mistake’. Czech President Miloš Zeman considers the US and NATO decision to withdraw troops from Afghanistan a mistake, the president’s spokesman said on Thursday in a statement for the daily newspaper Pravo. Read more.

Hungarian doctors ask Orbán not to let kids back to schools. The presidency of the Hungarian Doctors Union (MOSZ) wrote an open letter to Hungarian Prime Minister Viktor Orbán on Thursday, asking him to postpone the opening of schools scheduled for next week. Read more.

Borissov resigns, takes immediate paid leave. The Bulgarian government resigned on Thursday, following last Sunday’s elections, and Prime Minister Boyko Borissov announced he was going on paid leave from Friday, meaning he will not appear before parliament to explain his decision to not submit Bulgaria’s recovery plan to the Commission. Read more.

No signs of fire. The ministers of Romania’s USR PLUS Alliance attended a government meeting on Thursday after voicing their displeasure with how the prime minister handled the firing of the health minister. Romanian Prime Minister Florin Citu thanked his allies for attending the meeting, where he said important documents were approved, including the acquisition of an additional 4.2 million doses of the BioNTech/Pfizer vaccine.

While USR PLUS still wants the prime minister gone, a meeting to defuse the situation seems to have been postponed until next week, as Citu will on Friday pay an official visit to Cluj county in north-western Romania. (Bogdan Neagu, EURACTIV.ro)

Ruling coalition defines remaining key projects. Slovenia’s ruling coalition met at Brdo pri Kranju on Thursday to define the key projects until the end of the mandate. The projects include the Demographic Fund, the Long-Term Care Act, digitisation measures, a tax reform for citizens and businesses, and the Health Investment Act, the official STA news agency reported.

The participants, including ministers and coalition deputies, estimated that the government has stable support for these projects in the National Assembly. (Zoran Radosavljevic | EURACTIV.com)