Barnier wants to be ‘useful’ in the next EU Commission 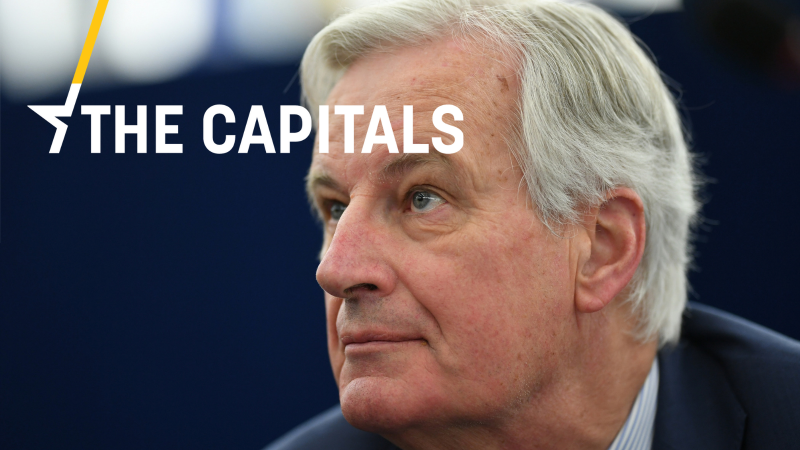 The Capitals is EURACTIV's daily newsletter from across Europe. [EPA/PATRICK SEEGER]

ZAGREB. Michel Barnier, the EU’s Brexit chief negotiator, has said he fully supports Manfred Weber as the European People’s Party (EPP) candidate for the EU Commission presidency, but at the same time, he also wants to be “useful” in the next EU executive.

Barnier visited Zagreb on 8 in May and met with Croatian PM Andrei Plenković. They both participated in a dialogue with citizens about the future of Europe.

Asked by EURACTIV Croatia’s Tea Trubić about his role in the next EU executive, Barnier nervously said he wants “to be useful in the next European Commission” but that he is “not in the campaign”.

It’s not a lie that his name has circulated in Brussels’ circles, especially after his strict EU line in the Brexit negotiations, as Jean-Claude Juncker’s potential successor. In addition, the EU socialists and liberals have openly opposed Weber’s candidature and both political groups will be needed to achieve a majority in the next EU House.

According to EURACTIV.hr’s Željko Trkanjec, it would be difficult for Barnier’s bid to be opposed by French President Emmanuel Macron.

Speaking in Munich on Tuesday, Barnier mainly focused on Brexit, but then shifted to the four pillars which, according to him, are crucial for the EU future: a “green” new deal; migration; the economy, especially confronting technological upheaval; and defence and security.

“If we act alone, we are out of the table […] we’ll definitively become spectators of our future, our own destiny. And I am not engaged in politics to be a spectator, huh? We have to be actors.” (Željko Trkanjec, EURACTIV.hr)

Satisfaction. In an op-ed published in German economic daily Handelsblatt on 8 May, leader of Social Democratic Party youth movement, Kevin Kühnert, said he was satisfied with the reactions after he called for major German companies like BMW to be collectivised.

“My remarks sparked controversy and dispute, and this is exactly the way it should be. Because disputes are productive when they focus on finding out the right way,” Kühnert wrote. Sometimes the harsh reactions only show “that we have to some extent lost the meaning of the economic fundamentals,” he added.

The East lags far behind the West. In a letter addressed to Chancellor Angela Merkel obtained by German daily Frankfurter Allgemeine Zeitung, conservative MPs from East German constituencies have raised the alarm and called for the establishment of temporary special economic zones in Lusatia and central Germany in order to compensate economic losses following the planned coal exit.

Otherwise, these regions would lag even further back behind West Germany, they have warned. (Claire Stam, EURACTIV.de)

#BelgianArms. Military equipment manufactured in Belgium was exported to countries that commit war crimes, a multi-week investigation conducted by Le Soir, Knack and VRT has found.

It showed that weapons sold to Saudi Arabia were widely used in the conflict in Yemen and light armoured vehicles resold by Belgium to Bahrain were used to repress peaceful demonstrations in the spring of 2011 and weapons feed Mexican drug cartels. Amnesty International Belgium has called for the establishment of a parliamentary inquiry. (Alexandra Brzozowski, EURACTIV.com)

Les Republicains (LR) are gaining momentum. The right-wing Les Republicains party (EPP) started the EU election campaign in bad shape, but much earlier than the other candidates, which seems to have helped: polls are more and more optimistic about Bellamy’s list, which could get around 15% of the votes, compared to 12% two months ago.

The party is pressuring its members not to support competitors from Macron’s Renaissance and as a result, Renaissance has low support from the right-wing. (EURACTIV.fr)

The “Portuguese way”. Josep Borrell, Spain’s Foreign Minister, said it was “not essential” to form a coalition government between the socialists (PSOE) and leftist Unidas Podemos, as long as both parties agree on a joint government program, EURACTIV’s partner EFE reported.

In an interview with public television TVE, Borrell said it was not “impossible” to form a government alliance similar to the Portuguese one: a socialist executive backed by Unidas Podemos in the parliament. (EuroEFE.EURACTIV.es)

Junior minister sacked. Italy’s PM Giuseppe Conte ousted transport deputy minister Armando Siri, who is under investigation for alleged bribery. The issue with Siri, who is an economic adviser to Salvini, almost led to a political crisis between the two ruling parties over recent weeks. (Gerardo Fortuna, EURACTIV.com)

Tsipras in Romania. In coordination with Cypriot President Nikos Anastasiades, Greek PM Alexis Tsipras is expected to raise the issue of Turkey’s “aggressive” actions in Cyprus’ exclusive economic zone at the informal EU Summit taking place today in Sibiu, Romania. “The EU will only upgrade its role in international and regional developments if it can effectively support the sovereign rights of its member states,” Greek government sources said. (Sarantis Michalopoulos, EURACTIV.com)

Georgia in Poland. Georgian president Salome Zurabishvili has visited Poland and focused on her country’s EU-NATO future, which according to her, does not only depend on domestic reforms, but also on “Western institutions’ political will”.

Unfinished victory. Slovakia celebrated the 74th anniversary of the end of the WWII on Wednesday. 8 May is a public holiday in Slovakia, the “Day of victory over fascism”. A new public opinion poll by AKO agency published on Tuesday saw the neo-fascist party Kotleba-ĽSNS emerge as the second strongest party with 14% of support for the first time.  (Zuzana Gabrižová, EURACTIV.sk)

The ‘United Patriots’ are a junior coalition partner to the GERB party of Bulgarian PM Boyko Borissov, consisting of three nationalist and far-right groups. The legislation was passed unanimously by 106 MPs present, in the absence of the groups of the Bulgarian Socialist Party (BSP) and the mostly ethnic Turkish ‘Movement of Rights and Freedoms’ (DPS). NGOs and right groups have strongly criticised the text. The final vote will be held after the European elections. (Georgi Gotev, EURACTIV.com)

Reduced VAT for organic food. The finance ministry has proposed the reduction of the VAT rate for traditional and organic food products to 5%, in order to “encourage healthy eating”. Romania currently taxes all food products with a 9% rate while the general VAT rate is at 19%. (EURACTIV.ro)

Pressure on Serbia to show restraint. Ambassadors of NATO’s Quint (US, UK, France, Italy and Germany) and the head of the EU Delegation to Serbia have called on Serbian President Aleksandar Vučić to show restraint and continue solving problems in the region in a serious and responsible way. (Beta-EURACTIV.rs)