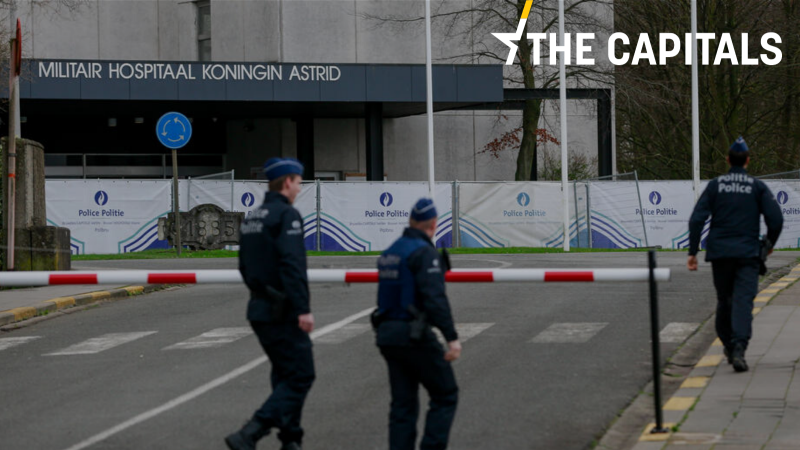 "We, doctors, should have a clear roadmap detailing how to go about it". [EPA/STEPHANIE LECOCQ]

Before you start reading today’s edition of the Capitals, we invite you to read the article by Alexandra Brzozowski on the Nuclear arms control treaty set for review as divisions over non-proliferation mount.

BRUSSELS. The Christian-democrat party has called for a meeting of federal, regional and community health ministers (six in total) to develop a common strategy to deal with the coronavirus epidemic. Meanwhile in Berlin, Health Minister Jens Spahn (CDU) announced the creation of a COVID-19 crisis team together with Interior Minister Horst Seehofer (CSU) yesterday (27 February).

Alexandra Brzozowski and Sarah Lawton have the story.

Action from Commission over border-transit conflict? Parliament on Thursday (27 February) discussed possible solutions for the overcrowded ‘Brenner’ tunnel, which leads from southern Austria to northern Italy through a mountain. The route is especially important for transport of goods – traffic has been rising recently, and the tunnel became a choking point. Philipp Grüll digs deeper.

France to welcome new Huawei factory. The first phase of the Huawei project would need a €200 million investment. This factory, which will manufacture equipment for mobile base stations, should create around 500 direct jobs. EURACTIV.fr reports.

F-word provokes outrage. Remarks made by the Finns Party Youth Group Vice Chairman, Toni Jalonen, have sent shockwaves across the country’s political landscape. Giving a speech in English at an ethno-nationalist Etnofutur event in Estonia, Jalonen said he was “a nationalist, a traditionalist and a fascist”. Pekka Vänttinen reports from Helsinki.

No divergence ‘for the sake of it’. Trade talks between the EU and the UK start next week, with thorny issues like state aid and fish set to complicate matters. A fight brewing over environmental standards may make an agreement by year’s end even more difficult to come by. Sam Morgan has more.

London says that it has no plans to diverge from EU regulations ‘for the sake of it’ and will not be lowering regulatory standards, but insists that the UK will not commit to future regulatory alignment and jurisdiction by the European Court of Justice.

Although the EU argues that agreeing to these are a precondition for an agreement, UK officials say that precedents exist in the EU’s trade deals with Canada, Japan and South Korea.

Meanwhile, Boris Johnson’s government has confirmed that the UK will not seek to remain signed up to the European Arrest Warrant but would want a fast-track extradition agreement based on the EU’s arrangements with Iceland and Norway, one of a series of agreements the UK wants to strike with the EU separate from an EU-UK trade deal. (Benjamin Fox, EURACTIV.com)

First coronavirus case. The first case of coronavirus has been identified in Northern Ireland. The adult patient is currently in isolation at the Royal Victoria Hospital in Belfast, having travelled through Dublin after coming from northern Italy. Samuel Stolton reports.

Italo-French bilateral. Italy’s PM Giuseppe Conte hosted French President Emmanuel Macron in Naples, in a bid to move on from last year’s diplomatic crisis. The coronavirus outbreak in Italy was, however, the main topic of discussion. Both Macron and Conte agreed that closing borders would not resolve the current situation, which instead needs more international cooperation. Gerardo Fortuna explains.

Greece invokes coronavirus to halt migration. In an unexpected move, Greek Prime Minister Kyriakos Mitsotakis decided on Thursday (27 February) to upgrade border controls to the “maximum deterrent” level to prevent migrants affected with coronavirus from entering EU territory. How did the Commission react? Sarantis Michalopoulos has the story.

No funds from Norway. Norway will not provide Poland with funding for its judiciary system within the framework of EOF Funds. The funds function as a non-refundable aid for Eastern European countries in exchange for easier access to their markets. This time, Norway cited concerns about the rule of law and ongoing reforms of judiciary as the reason for halting the funds. (Łukasz Gadzała | EURACTIV.pl)

First victim of Polish muzzle law against judges. The Supreme Court’s disciplinary chamber will process on 20 March the national prosecutor’s demand to revoke the immunity of judge Igor Tuleya. Tuleya has been one of the most outspoken critics of the government’s judicial changes.

A court sentenced Marián Kočner and Pavol Rusko to 19 years in prison for forging promissory notes worth €69 million. Kočner also stands trial in a separate proceeding for the murder of journalist Ján Kuciak. The promissory notes, signed by Pavol Rusko in his capacity as TV Markiza executive, which the court ruled were forged signatures, could have resulted in the owner of TV Markíza being required to pay €69 million to Kočner.  The ruling is not final and the case will very likely be heard by the Supreme Court. (Zuzana Gabrižová | EURACTIV.sk)

Várhelyi joins V4 and WB in Prague. “There are very many reasons [why the EU enlargement process is stuck]. You will find the answers when you look at the methodology we proposed. The lack of credibility, political ownership and dynamism, and the very administrative nature of the whole process,” Commissioner Olivér Várhelyi told EURACTIV.cz. “We are here now to revitalize it, and hope to answer all the misgivings,” he added. Várhelyi joined a Prague meeting between V4, Austria, Croatia, Slovenia and Western Balkan countries on Thursday, where Visegrad repeated its support for the start of EU entry talks with Albania and North Macedonia. (Ondřej Plevák | EURACTIV.cz)

Speaker Kövér: EU may be over by 2030. “I would not dare to bet a great amount that the European Union will still exist in 2030”, László Kövér, speaker of the Hungarian National Assembly, told Katolikus Rádió (Catholic Radio). Kövér said there are two sides that cannot compromise: those who think that there can be a democracy based on unlimited freedom on one side, and those who think that democracy can only be based on the balance between order and freedom on the other side.

He added that democracy could not stand against the will of the majority, and it now seems that this is becoming a trend in Europe. (Željko Trkanjec | EURACTIV.hr)

A surprising decision. The centre-right PNL (EPP) is supporting the candidacy of Nicusor Dan in the race for the Bucharest mayoralty. Dan, who is running as an independent against current mayor, Gabriela Firea of PSD, was the founder of the Save Romania Union (USR, now part of RE), but has since left the party. Bogdan Neagu reports from Bucharest.

US senator flags Chinese media meddling in Central Europe.  Influential Republican Senator Marco Rubio has asked President Donald Trump to block a deal through which the PPF group of Czech billionaire Peter Kellner is to acquire a majority stake in Central European Media Group Enterprises (CME). The media company operates in the Czech Republic, Bulgaria, Romania, Slovakia and Slovenia with a total of 97 million viewers. The group owns the Bulgarian television bTV, which has the biggest audience. Krassen Nikolov reports.

First formal meeting. New Croatian President Zoran Milanović chose neighbouring Slovenia for his first official visit, where he was welcomed by his counterpart Borut Pahor. Bilateral relations between the two countries have lately been challenged by the issue of border arbitration and razor wire put on Slovenia’s border with Croatia to prevent migrants from illegal entry. Tea Trubić Macan has the detail.

COVID-19 daily update. The government approved €304,000 for the Fran Mihaljević infectious diseases hospital in Zagreb to purchase nine artificial ventilation apparatuses for the treatment of coronavirus infections. There are three confirmed cases so far, all of which are showing mild symptoms that do not require medical attention but have nevertheless been kept in quarantine out of precaution. PM Andrej Plenković assured citizens that the situation is “under control”. (Tea Trubić Macan, EURACTIV.hr)

Kosovo to abolish import tariffs. Kosovo Premier Albin Kurti stated on 27 February that the tariffs on the imports of raw materials from Bosnia and Herzegovina and Serbia would be abolished as of 15 March, the Serbian Broadcasting Corporation (RTS) has reported. Read more.

Slovenia’s NLB buys Serbia’s Komercijalna Banka. Serbia’s Finance Minister Sinisa Mali, the New Ljubljana Bank (NLB) Chairman of the Executive Board Blaz Brodnjak and Board member Arcibald Kremser signed on 26 February a contract under which NLB bought 83.23%tof Serbia’s Komercijalna Banka for €387 million, payable in cash after the closing of the transaction, the Ministry of Finance reported. EURACTIV Serbia has more.

€140 million for the highway  A loan from the EIB will be used for building two 12 kilometre sections of the international Vc corridor. The first section is expected to be finished in 2020, and the second in 2023. The EIB has so far contributed to the construction of 82 km of the highway on the Vc corridor, and it is ready for further partnerships with local authorities. The total amount of money (through loans and grants) provided by the EIB has exceeded €2.7 billion. (Željko Trkanjec | EURACTIV.hr)