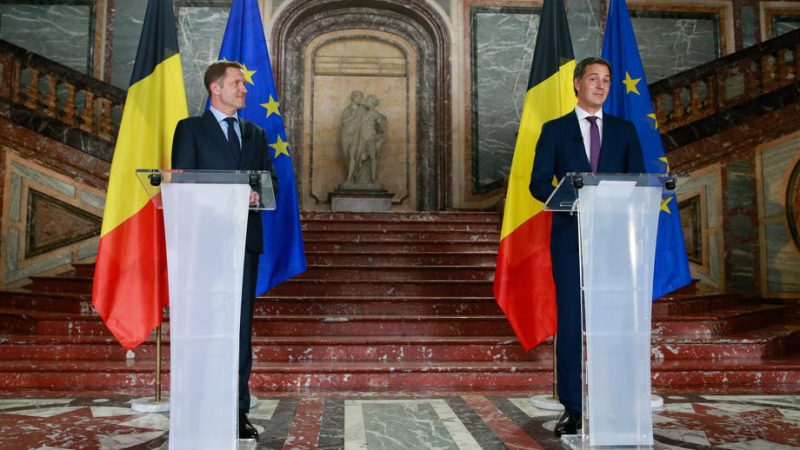 PS chairman Paul Magnette (L) and Minister of Cooperation Development, Digital Agenda, Postal services and Finance, Open Vld Alexander De Croo pictured at a press conference of the co-formators after they reached an agreement for a Vivaldi government after a last night of negotiatons in Brussels, Belgium, 30 September 2020. [EPA-EFE/STEPHANIE LECOCQ]

De Croo, a Flemish liberal, is expected to be sworn in and present the government’s programme to lawmakers on Thursday, the first day of a summit of EU leaders that he would be expected to attend.

De Croo will be the first Flemish federal prime minister since 2011.

Following weeks of talks, seven political parties spanning the French-Flemish language divide have agreed to form a majority coalition to replace the caretaker administration of Francophone liberal Sophie Wilmes, who led Belgium through six months of the COVID-19 crisis.

The so-called ‘Vivaldi’-coalition consists of Liberals, Socialists and Greens, divided into separate entities from Flemish and French-language regions, as well as the Flemish Christian Democrats.

“What seemed impossible, what took so long, too long to happen, is a fact: the federal government is formed,” De Croo said in a press conference after the final talks on Wednesday, paying tribute to his Socialist co-formateur Paul Magnette.

“That spirit of working together and finding solutions is what I felt in the negotiations. A united, prosperous country where everyone can contribute to finding a better result. In the years to come, we will need everyone to meet the expectations of the population,” he added.

“We live in a beautiful country, in which we can do more by joining forces,” De Croo concluded in his statement.

Magnette, for his part, expressed his “deep relief” at the end of “a too deep crisis which damaged the confidence of our citizens”.

In its last phase, the negotiations stalled on budget talks, resulting in a plan that will include €3.3 billion for new policies topped off with €1 billion for investments and €1 billion for temporary measures.

Under the new government agreement, the coalition negotiators agreed to increase the health care budget by 2.5% annually and raise the minimum pension to €1,500, including for the self-employed, according to De Standaard.

A COVID-19 commissioner will be appointed to manage the health crisis as Belgium has one of the world’s highest COVID-19 fatalities per capita and the country’s death toll passed 10,000 on Wednesday.

Additionally, there will be two ministers in the new government who will have to prepare state reform for after 2024, VRT Nieuws reports. It will be connected with a major citizens’ debate “without taboos” about how Belgium works and where the powers lie, which technically does not exclude re-federalisation.

The talks on the distribution of powers and ministries are to continue throughout Wednesday.

The nationalist New Flemish Alliance (N-VA) Party, which got the largest share of the vote in 2019 with 16%, will not be part of the new governing coalition, with the same applying to the far-right Vlaams Belang, which got 12% of the vote in the last elections.

The two parties have already announced plans “to organise their resistance” towards the future government.

“We will fight this project on land, at sea and in the air. From Opgrimbie to De Panne,” N-VA party leader Theo Francken said, calling on people to hang out their Flemish flag and post a photo of it.

N-VA, together with Vlaams Belang, have repeatedly pushed for a confederal Belgium, calling for the country to be split into two separate states capable of making their own political decisions.

Belgium had been under a caretaker administration since the start of the COVID-19 crisis in March and without a fully-fledged government since December 2018, when a four-party coalition led by Francophone liberal Charles Michel collapsed over the UN migration pact.