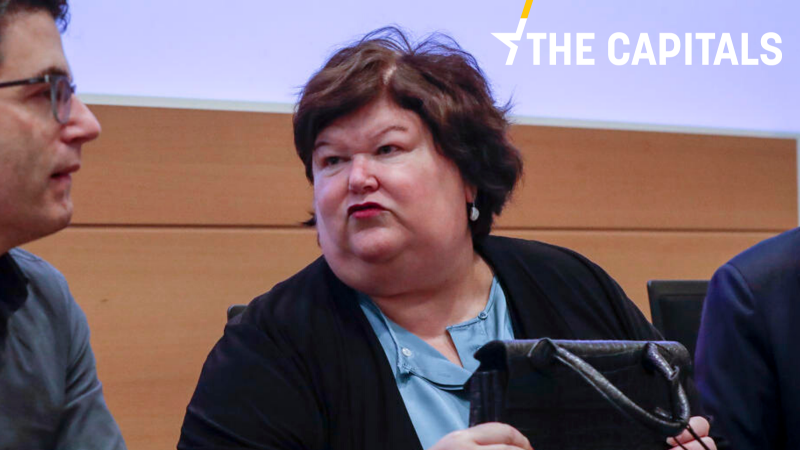 According to De Block, the four countries’ action will weaken an effort by the EU to encourage research into other vaccine possibilities, which when it produces a successful vaccine will then be supported by purchases from all 27 member states. [EPA/OLIVIER HOSLET]

Before you start reading today’s edition of the Capitals, feel free to have a look at the article “Beer boss: Lowering VAT on alcohol would help hospitality sector revive quickly” as well as an interview with EU Commissioner for Cohesion and Reforms Elisa Ferreira who said ‘A crisis of this dimension cannot be addressed with a 1% GNI budget’.

Now that many European countries have started lifting lockdown measures and opening borders, make sure you stay up to date with EURACTIV’s comprehensive overview, which is regularly updated with the help of our network of offices and media partners. Also, check our country update pages, such as the one for Poland and Portugal.

Belgium criticises vaccine buying solo-run. Belgium’s health minister Maggie De Block (Open VLD) has said she considers it “unreasonable” that four EU member states are negotiating to buy some 400 million of doses of a British-Swedish COVID-19 vaccine outside of the joint procurement initiative launched by the European Commission.

In response, the Social Democrats (SPD) and the Greens are demanding a formal explanation from Amthor, as well as an official register of lobbyists, something that the conservative CDU/CSU union has long been against. Read more.

Macron demands more EU solidarity. In a fourth national address since the start of the COVID-19 pandemic, French President Emmanuel Macron said he would fight for an EU recovery plan with the economy, the environment and solidarity at its core at the next EU Council summit. The plan, which would be carried out with Germany in particular, will be implemented with an “independent, stronger, more solidarity-based and more sovereign Europe”, he added.

The French president also announced that all schools, colleges, bars and restaurants would reopen for the last two weeks before summer. And although the French president didn’t say much on the topic of racism within the police, he did say that France would not destroy its statues or destroy its past. (EURACTIV.FR)

EU recovery package in breach of EU treaties. Ahead of the EU Council summit scheduled for next Friday (19 June), the Finnish parliament’s constitutional law committee, the decisions of which are binding on the government, stated that the European Commission’s recovery package may be in breach of the EU treaties as it isn’t clear whether the EU can borrow money for the allocation of grants. EURACTIV’s Pekka Vänttinen reports from Helsinki.

Montanelli’s statue at centre of controversy. The statue of prominent right-wing journalist Indro Montanelli, who worked for Corriere della Sera for many years before becoming the founding editor of Il Giornale, and died 2001 at the age of 92, has been sprayed red and tagged with the words “racist, rapist” on Saturday (13 June). But why?

Spain to reopen borders with EU from 21 June. Spanish Prime Minister Pedro Sánchez announced on Sunday (14 June) during a weekly video conference that Spain will reopen its borders – which have been closed since 14 March – with the rest of the EU from 21 June, EURACTIV’s partner EuroEFE reported.

“From then, there will no longer be an obligation to quarantine for those entering our country,” he said. However, while travellers from Portugal will have to wait until 1 July at the request of its government, those coming from non-Schengen countries will be allowed to enter Spain from 1 July as long as the country’s epidemiological situation is similar or better than that of the EU, the PM said, adding that they will also “have to accept some health measures related to origin, travel and destination. And lastly, it will have to be reciprocal.”

In other news, the government will unveil a tourism promotion plan on Thursday (18 June), said Sánchez. Businesses in the tourism industry, which represents about 12% of the country’s GDP, have been campaigning for travel restrictions to be lifted. EURACTIV’s partner EuroEFE has the story.

Closed until 1 July. The land border between Portugal and Spain, which has been closed since 16 March due to the COVID-19 pandemic, will remain closed until 1 July at the request of the Portuguese authorities, despite Spain reopening its borders with other countries on 21 June. The reopening of the border will be marked by a ceremony attended by the heads of state and government of the two countries. Portugal will also maintain its ban on flights coming from non-EU countries until the end of June. (Lusa.pt)

Greek Foreign Minister in Paris. Foreign Affairs Minister Nikos Dendias is visiting Paris today, where he will meet with his French counterpart Jean Yves Le Drian to discuss the developments in the eastern Mediterranean and Turkey. The French Presidency issued a strong statement yesterday against Turkey’s involvement in Libya and the breach of arms embargo. Both politicians will join a meeting of EU foreign affairs ministers later today with US Secretary of State Mike Pompeo.

Greek media reports that the issue of Turkey will be raised as well as the EU request for NATO’s help in Operation Irini. (Sarantis Michalopoulos)

Anti-LGBT campaign. As Polish President Andrzej Duda has been losing traction in the last weeks and Rafał Trzaskowski, the highest-rated opposition candidate, is seeing a surge in the polls ahead of the presidential elections scheduled for 28 June, the ruling party PiS has started to adopt anti-LGBT rhetoric over the weekend as a way to mobilise its base.

Jacek Żalek of PiS’ coalition partner Porozumienie was cut from a video interview with the largest private TV station in Poland for suggesting that “LGBT is not people, but an ideology”. The following day, Duda repeated his words during a campaign rally. And when PiS and Duda started to tentatively back down from such rhetoric following international outcry, Przemysław Czarnek, a member of Duda’s campaign staff, said: “Let’s stop listening to these idiocies about human rights. These people are not equal to normal people”.

That begs the question of why the PiS is following such a strategy with two weeks to go before the elections?

Many lawyers have criticised the decision for not being sufficiently explained and reasoned. This issue – whether shops will be required to close on Sundays by law going forward – is a source of tension in the governing coalition. (Zuzana Gabrižová | EURACTIV.sk)

Leading EU mission in Mali. The Czech military will head an international mission for the first time after Brigadier General Frantisek Ridzak assumed the post of commander of the EU’s multinational military training mission (EUTM) in Mali on Friday (12 June).

Ridzak, who will head the mission for six months, will lead more than 700 soldiers from some 20 countries. The EUTM’s main task is to help build and train the Malian military that is fighting Islamist militants. (Ondřej Plevák | EURACTIV.cz)

NEWS FOR THE BALKANS

Vacation without isolation. Public health authorities announced a list of 17 European countries from which citizens may return without the need to stay in isolation after arriving in Romania. The list includes Greece and Bulgaria, two popular destinations for summer holidays, but notably excludes Italy and Spain, home to the largest Romanian migrant populations, and two of the hardest-coronavirus-hit countries. Flights to and from the 17 countries are set to resume on 15 June, the authorities said, adding that the list will be updated weekly.

In other news, hospitals that treated COVID-19 patients have started to apply for EU funding for which the first contracts could be signed later this month, the EU funds minister has said. So far, 16 hospitals have filed applications worth €71.6 million of a financing line of €350 million. Hospitals can request reimbursement of expenses made to prepare units for taking care of COVID-19 patients and investments in new equipment. (Bogdan Neagu | EURACTIV.ro)

New round of brown bear culls. Slovenia’s Environment Agency has issued a permit for the culling of 115 brown bears until September, aimed at keeping their number in check, the official STA news agency has reported. Slovenia is among the countries with the highest density brown bear population in the world. EURACTIV’s Zoran Radosavljević has more.