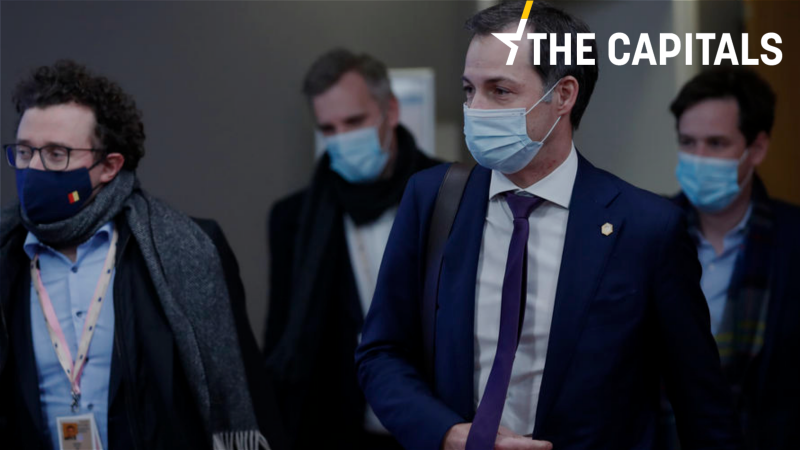 Before you start reading today’s edition of the Capitals, feel free to have a look at the article ECB considers not using €1.8 trillion pandemic stimulus in full, by Jorge Valero.

Belgium’s Consultation Committee, which includes representatives of the various governments of the country, is set to examine whether a ban on non-essential travel could be imposed in the absence of an EU-wide solution after the EU summit on Thursday. Read more.

French health minister defends vaccination strategy. “Before the end of January, we will have carried out 1.3 or 1.4 million vaccinations, more than the one million we announced,” French Health Minister Olivier Véran said on TF1’s evening news Thursday in defence of his government’s vaccine strategy, which had been criticised for its slowness. Read more.

Absence of diplomacy towards the EU. The UK government has been accused of being ‘petty’ after downgrading the diplomatic status of the EU’s ambassador in London. Read more.

Irish MEPs in China plea. Two Irish MEPs have pressed the Chinese government to allow Dublin businessman Richard O’Halloran to leave the country after Chinese authorities imposed a ban on his travel out of the country in 2019. Read more.

Finland’s president holds talks with Putin. On Finland’s initiative, Finnish President Sauli Niinistö – who, unlike many other EU leaders, has maintained a quite regular dialogue with Russian President Vladimir Putin – held what was described as a long and profound phone call with his Russian counterpart on Thursday. Topping the list of discussed issues was the treatment and imprisonment of Russian opposition leader Alexei Navalny and its possible impacts on European relations. Read more.

Norway’s block on EU fishing vessels keeps Danish boats in port. Oslo is withholding permits for British and most EU fishing vessels to catch fish in its North Sea waters while post-Brexit talks between Norway, the EU and Britain are ongoing, leaving many Danish fishing vessels moored idly in ports. Read more.

Italian judge condemns government for ‘informal readmission’ of migrants. Italy’s internal affairs ministry was condemned by the Court of Rome on Monday for its ‘informal readmission’ of migrants on the Italian-Slovenian border – a practice which, according to many Italian and international media, often turns into a chain rejection to Bosnia, and is in many cases marked by violence and beatings of migrants. Read more.

New Greek bill limits journalists to a ‘specific spot’ in protests. All opposition parties and journalist associations have lashed out against the ruling New Democracy party in Greece after its decision to push forward a bill, which provides that journalists will be limited to s “specific spot’ during demonstrations. Read more.

Polish parliament calls on Russia to release Navalny, associates. The lower house of the Polish parliament, the Sejm, passed a resolution on Thursday – with 438 votes in favour, one against and one abstaining – condemning Russia’s arrest of opposition leader Alexei Navalny and the repressions used against him and his close associates. Read more.

In other news, the Sejm also elected on Thursday the ruling Law and Justice Party candidate, Deputy Foreign Minister Piotr Wawrzyk, as the new Commissioner for Human Rights – a vote which has yet to be approved by the Senate, the parliament’s upper house. Read more.

Czech ‘anti-masker’ MP causes turmoil. A scuffle broke out on Thursday in the Czech parliament’s lower house, the Chamber of Deputies, after independent MP Lubomír Volný – who refused to wear his mask during the debate – was cut off during a debate on extending the COVID-19 state of emergency. Read more.

COVID-19 certificates to come to Hungary in mid-February. Plastic cards which will serve as certificates of protection against the coronavirus can be introduced within weeks in mid-February, according to Gergely Gulyás, the minister in charge of the prime minister’s office. Read more.

Slovaks bought record amount of e-cars amid pandemic. A record number of electrified passenger cars was registered in Slovakia last year, accounting for 11.8% of all new passenger motor vehicles (M1 category), according to statistics published by the Slovak Association of the Automotive Industry. Read more.

Bulgaria extends emergency situation. Bulgarian Health Minister Kostadin Angelov will propose to the government to extend by three months the current emergency situation, set to end at the end of January, Angelov announced in parliament on Thursday. While some restrictive measures would continue when the three-month extension starts, some will be eased, the minister explained. Read more.

Romanians showing increased interest in vaccinations. Romanians showed an increased interest in anti-COVID vaccines as four in 10 people said they will likely vaccinate against COVID-19 while two in 10 said they do not want the jab, a recent poll conducted by IRES showed.  According to the poll, the number of people interested in getting the vaccine is higher than in previous surveys. Read more.

Croatia aims to solve court case backlog. The justice ministry’s goal in the year ahead is to solve all court cases older than seven years – about 25,000 – because it is dissatisfied with the length of court proceedings and the large number of pending cases, said Justice and Public Administration Minister Ivan Malenica. Read more.

Slovenia’s ski resorts allowed to open. Ski resorts in nine regions that have been moved to the red tier of coronavirus restrictions will be allowed to reopen on Saturday, but skiers – with a few exceptions – will have to produce a negative test result to hit the slopes and strict public health rules will have to be observed.

The government has allowed galleries, museums and libraries to reopen starting from Saturday in nine of Slovenia’s 12 statistical regions with lower coronavirus infection rates. Meanwhile, Slovenia reported 1,445 new cases of coronavirus from PCR and rapid antigen tests combined, marking a steady decline in the past week, according to fresh government data.

And Inspections by the Agency for Medicinal Products and Medical Devices (JAZMP) have not detected any risks to public health from the rapid antigen tests the state has bought from the company Majbert Pharm for mass screening. JAZMP has thus not banned them, the agency told the STA in a written statement on Thursday. (Željko Trkanjec | EURACTIV.hr)

Serbian soldiers claim being forced to get vaccinated. The Serbian Military Union have received complaints from a number of soldiers who claim that their unit commanders are pressuring them to get vaccinated against COVID-19 and that those unwilling to comply are threatened with disciplinary actions, said a statement by the military union issued on Thursday. Read more.

Riot breaks out at migrant centre outside Sarajevo.  Police broke up a riot that erupted in the night from Wednesday to Thursday at one of the reception centres for illegal migrants outside Sarajevo, a police spokesman has confirmed. Read more.

Albania expels Russian diplomat. The Albanian government has expelled Russian diplomat Alexey Krivosheev for repeated violations of COVID-19 restrictions, exit.al reported. In a press statement on Thursday, the foreign ministry said the diplomat had repeatedly violated the rules since April 2020, despite the ambassador’s promises that he would not repeat such behaviour.

“Unfortunately, contrary to the promises, the diplomat continued to violate the measures despite the expression of the goodwill of both parties not to repeat the violations. Repeated challenges against the rules and protection measures against the pandemic, and disregard for the concerns of the Albanian state institutions, can not be justified and can not be tolerated further.” The diplomat was declared persona non grata and must leave Albania within 72 hours. (Željko Trkanjec | EURACTIV.hr)