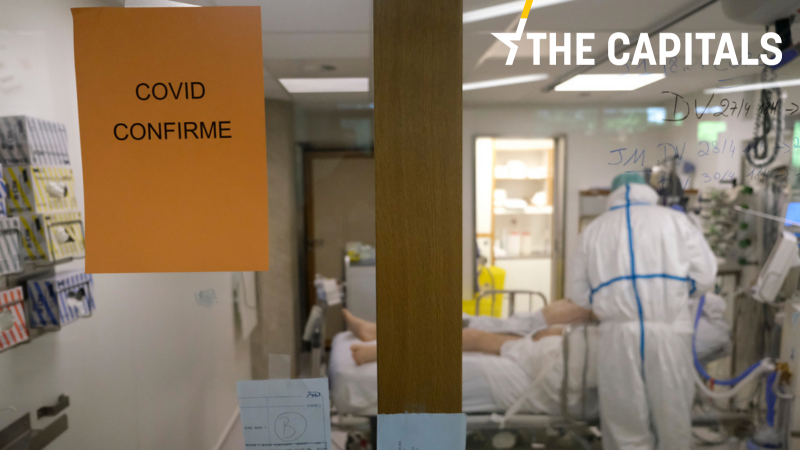 Under the current regime, if a person has been in close contact with an infected or upon return from a red zone from abroad, it had to be tested for COVID-19. [Shutterstock/Alexandros Michailidis]

Before you start reading today’s edition of the Capitals, feel free to have a look at the Special Report “Preventing osteoporosis in the EU“, by Natasha Foote.

European parliament tests positive. The European Parliament has so far recorded 56 registered COVID-19 cases, EURACTIV has learnt. However, the EU House does not have information on how many tests of officials were conducted elsewhere and were not declared. More.

No COVID-19 symptoms, no test? Belgium’s health ministers are set to adjust the COVID-19 test strategy in a bid to reduce long waiting times. According to the new system, those with no symptoms will no longer be tested, even if they had contact with a person infected with the virus. Read more.

Bundestag wants more power in determining COVID-19 rules. The Bundestag should have more say when it comes to new coronavirus restrictions, according to MPs from the liberal FDP, the Greens, leftist party Die Linke, and some grand coalition MPs. They have criticised Chancellor Angela Merkel’s approach to addressing the virus, which has focused on summits between the federal government and leaders of the 16 states. Read more.

EU-UK talks set to resume. EU and UK trade negotiators are set to return to the table after performing a significant ‘volte-face’ on Monday (19 October).

EU chief negotiator Michel Barnier said that the bloc remained “available to intensify talks in London on all subjects, and based on legal texts, after a weekend of rhetoric in which both sides appeared to have abandoned argued that the other would have to make major compromises in order to re-start the talks. Read more (Benjamin Fox | EURACTIV.com)

Wide support for abortion law reform. A citizens’ initiative to reform Finland’s abortion laws has gathered more than 50,000 signatures within a few months, meaning it has surpassed the minimum threshold of signatories necessary to obligate decisions makers to consider the initiative. Read more.

More power to local administrations. The new COVID-19 government decree came into force on Monday (19 October), meaning local administrations will now be able to close streets and city squares after 9pm, though it remains unclear which specific institution will hold such power. Read more.

In other news, Italy will not be requesting funds from the European Stability Mechanism unless there is “an immediate cash flow need”, Prime Minister Giuseppe Conte has said, adding that EU funds would bring “only limited savings” and require “new taxes and cuts”.

However, the Democrat Party’s leader in the Chamber of Deputies, Graziano Delrio, urged the prime minister to discuss whether ESM resources are the best solution before parliament. “I do not agree with PM Conte on the cuts and taxes necessary if we decide to use the ESM, but in any case it will have to be discussed in parliament,” said Delrio. (Alessandro Follis | EURACTIV.it)

New COVID-19 restrictions for Aragón and Navarra. The Spanish autonomous communities of the north-east Aragón and Navarra regions on Monday (19 October) implemented new restrictions to curb the second wave of the COVID-19 pandemic, EFE reported. While bars and restaurants will only be allowed to be at half capacity, social meetings are limited to a maximum of six. Read more.

Golden Dawn: Prosecutor fuels the fire. In a move that triggered strong reactions, the prosecutor of the Greek neo-Nazi Golden Dawn case suggested that those convicted for directing a criminal organisation should be given a suspended sentence. Read more.

Read more: “Historic or not? Greece and US lost in translation over North Macedonia”

EU to launch legal action over Cyprus, Malta ‘golden passports’. The EU said Monday (19 October) it will begin legal action against Cyprus and Malta over their controversial “golden passport” schemes for foreign investors, which critics say have been exploited by criminals. Read the full story.

Read also on the topic: How the outgoing Cypriot Commissioner got burnt

In other news, Przemysław Czarnek was sworn in by Polish President Andrzej Duda on Monday morning (19 October) as the country’s new education and science minister. The ceremony, initially scheduled for 5 October, had to be postponed due to Czarnek testing positive to COVID-19 and having to self-isolate.

Czarnek’s appointment has been met with strong criticism, due to his homophobic statements and accusations of anti-Semitism. “Let’s end the discussion about these LGBT abominations, homosexuality, bisexuality, equality parades,” he had said in the past.

Czarnek also previously said: “There is no doubt that this entire LGBT ideology, which grew out of neo-Marxism, comes from the same root as German National Socialism, which is responsible for all the evils of World War II, the destruction of Warsaw and the murder of those who fought for our freedom in the Warsaw uprising. It’s of the same origin.”

Coal Commission meeting. The Czech Coal Commission will meet on Tuesday (20 October)  to discuss whether the country should phase out coal by 2033, 2038 or 2040. Read more.

Controversial Supreme Court head. The Hungarian parliament has elected András Zsolt Varga to head the country’s supreme court for the next nine years. The former deputy of  controversial Chief General Prosecutor Péter Polt and law professor, had never served in judicial capacity before being appointed member of the Constitutional Court, a separate legal entity in the country’s legal system created in 2014 by Prime Minister Viktor Orbán’s government. Read more.

Grammar school teachers are prone to conspiracies. More than half of Slovak teachers in grammar schools believe that coronavirus was created artificially, while 49% say they would not get a vaccine even if the vaccine was free of charge. These are some of the findings of an opinion poll conducted by Focus agency. One third of the teachers surveyed believe that vaccines are preparing people for microchip implantation. (Zuzana Gabrižová | EURACTIV.sk)

Interconnection as a priority. Romania’s main objective is finalising the strategic interconnection projects, said President Klaus Iohannis about the talks that took place at the Three Seas Initiative summit. The European Commission has repeatedly criticised Romania’s limited capacity to connect with its neighbours. Read more.

Bosniaks and Albanians will not enter government. Bosniak Party and Albanian list “Unanimously” decided not to be part of the new governing coalition. However, they are prepared to support all constructive acts in parliament. (Željko Trkanjec | EURACTIV.hr)