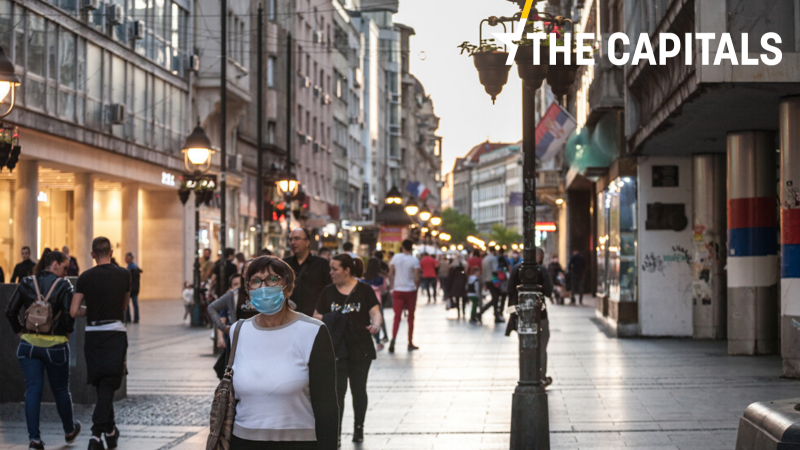 Before you start reading today’s edition of the Capitals, feel free to have a look at the article “Croatia’s ruling HDZ scores unexpected win in parliamentary elections” by Tea Trubić Macan.

We would like to remind you that everyone at EURACTIV is keen to continue delivering top-quality content that covers the EU in a clear and unbiased way, despite being heavily impacted by the current crisis. As we, at EURACTIV, firmly believe that our readers should not have to access content via a paywall, we are asking you to consider contributing and thank all of you who already have. If you are interested in making a one-time or recurring donation, all you need to do is follow this link.

BELGRADE. A state of emergency due to the COVID-19 pandemic was declared on 3 July, Belgrade mayor Zoran Radojičić announced, though he added that the current epidemiological state of the pandemic did not call for closing the city.

Meanwhile, the Greek government has announced that all Serbs will be banned from arriving in Greece until 15 July. Serbia was among the countries that the EU opened its borders as of 1 July, but member states can reconsider the list anytime.

Commission’s ‘risky’ move to re-visit orphan drugs regulation. The European Commission is expected to present by the end of July an evaluation study on the pros and cons of the application of orphan and paediatric regulations, which deal with a niche segment of rare diseases that affect fewer than five in 10,000 people. Read more.

No police study, after all. The German government will not commission a report examining racial profiling in the police force, after Interior Minister Horst Seehofer Horst Seehofer (CSU) said over the weekend that he sees “no need” for it”.

This comes after the country’s interior and justice ministries had announced plans to conduct such a study in early June, in line with the recommendations of the European Commission against Racism and Intolerance (ECRI). EURACTIV Germany’s Sarah Lawton has the details.

Castex said he would govern with “a mix of willingness and experience with a desire to bring people together,” he told  Le Journal Du Dimanche in an interview, adding that he does not “believe in soft consensus”. Meanwhile, the French president tweeted on Sunday that “the project I carried out in 2017 and for which I was elected by the French remains at the heart of my policy. But it must be adapted to the international changes and crises we are experiencing: a new path must be drawn,” (Anne Damiani | EURACTIV.fr)

Protests around headscarf ruling. Around thousand protesters gathered in Brussels on Sunday under the banner “#HijabisFightBack Protest” to protest against the decision of the Constitutional Court supporting a higher education establishment which intends to prohibit its students from wearing signs representing philosophical or religious belief. Alexandra Brzozowski has more details.

IDs without gender. Identity cards in the Netherlands will no longer have a gender indication from 2024 or 2025, when the production of identity cards would be reviewed, making the costs and consequences of the change “limited,” said Dutch Minister for Emancipation, Ingrid van Engelshoven.

In passports, ‘man’, ‘woman’ or ‘X’ will remain because of European regulations. The Netherlands is not the first EU member state to have an identity card without a gender statement; it has been absent from German ID cards for some time. (Alexandra Brzozowski, EURACTIV.com)

Students and teachers in quarantine again. Students and teachers from about 20 primary and secondary school classes have had to self-isolate at home again due to suspicions of COVID-19 after children and teenagers returned to school in small groups from the end of May. EURACTIV’s Anne Damiani reports.

COVID-cases still on the rise. From Saturday to Sunday, Austria had registered 106 new coronavirus infections, pushing the number of currently known sick patients to 959. Many cases are linked to three slaughterhouses located in Upper Austria, where employees had spread the virus. As a result, the local government decided to make face masks in administrative buildings mandatory again. (Philipp Grüll | EURACTIV.de)

Di Maio open to ESM fund, criticizes ‘frugals’. Italian Foreign Minister Luigi Di Maio clarified that there is no ideological battle with regards to the European Stability Mechanism (ESM), the EU’s bailout fund, adding that “there is an open negotiation at international level. We trust our PM Giuseppe Conte.” Alessandro Follis reports.

Another region in lockdown in 24 hours. Spain on Sunday put a second region back into lockdown in 24 hours after a spike in Covid-19 infections. Around 70,000 residents in the north-western region of La Marina in Galicia were ordered into quarantine after a new outbreak linked to several bars in the area. Read more on EFE.

///
ATHENS
No to a bailout. Greek PM Kyriakos Mitsotakis told The Financial Times in an interview that there is no way for Athens to accept Troika-style conditionality in the Recovery Fund. “Greeks have matured a lot,” he said. “And we want to do our own reforms.”
Weber lashes out against Erdoğan. EPP chief in the European Parliament Manfred Weber has hit at Turkish President Recep Tayyip Erdoğan over the latter’s intention to turn Hagia Sophia into a mosque. Read more.

No presidential TV debate. Opposition presidential candidate Rafał Trzaskowski announced he will not take part in a televised election debate with his rival, incumbent Andrzej Duda (PiS), that is due to take place on state broadcaster TVP on Monday (6 July). Alexandra Brzozowski has the story.

Delayed reaction to new Covid-19 outbreak. The Czech government is facing criticism due to its slow reaction to a regional coronavirus outbreak in the Karviná area, which puts the Czech Republic among the EU countries currently facing a sharp rise in positive COVID-19 cases. The Karviná area is currently the most affected Czech region with 247 cases of COVID-19 per 100,000 inhabitants, of which most cases were reported after massive testing of miners from the local coal mines.

In response to the outbreak, however, the state coal miner company OKD only closed its mines in the area on Friday (3 July) despite opposition parties calling for closures much earlier. Foreign Minister Tomáš Petříček (S&D) admitted that the government should have reacted to the local epidemiological situation faster. (Aneta Zachová | EURACTIV.cz)

Slovakia fails to protect Natura 2000 sites. Environmental NGOs are calling for the immediate suspension of logging in forests that are home to the Capercaillie (Tetrao urogallus), a large forest bird. This comes after the European Commission decided to refer Slovakia to the Luxembourg Court for failing to assess the impact of sanitary logging on Natura 2000 sites, and for the country’s failure to take measures to protect a bird species. (Zuzana Gabrižová | EURACTIV.sk)

An unexpected winner. Croatia’s ruling conservative HDZ (EPP) is the unexpected relative winner of parliamentary elections held on Sunday (5 July) despite the renewed rise of coronavirus infections. However, due to the sudden spike in COVID-19 cases, turnout was only 45.7%, one of the lowest since Croatia’s first democratic elections in 1990. EURACTIV Croatia’s Tea Trubić Macan has the full story.

Coronavirus and summer create first border queues. On Sunday evening (5 July), passengers at the Gruškovje border crossing (eastern Slovenia) queued for two and a half hours to enter Slovenia from Croatia, as a tougher border regime coincided with the first summer vacation weekend. Gruškovje is one of the main crossings for travellers from Western and Central Europe. EURACTIV’s Zoran Radosavljević has more.

Serbia’s electoral commission adopted a report on Sunday (5 July) regarding the final results of the parliamentary elections, according to which president Aleksandar Vučić’s For Our Children party obtained 1,953,998 votes or 60.65% of the 188 seats in parliament. EURACTIV Serbia looks into how other parties fared in the elections.