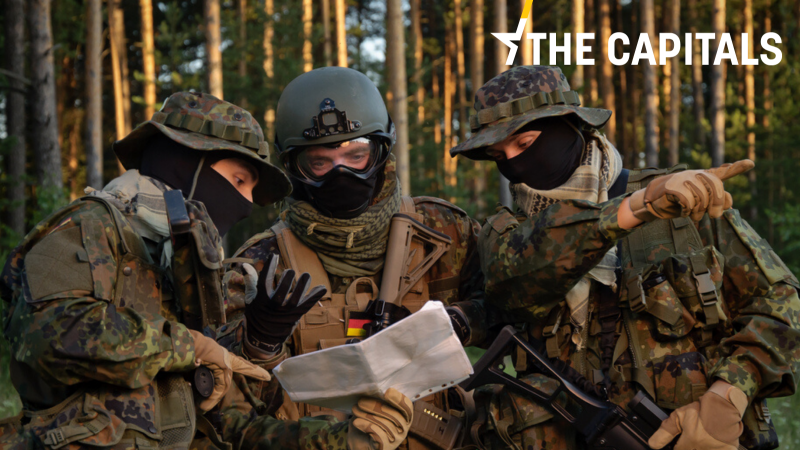 The report presented by Kramp-Karrenbauer also cited a "toxic leadership style", as well as "lax handling of material and ammunition," which has been the subject of prior concern in the country. [Shutterstock / BPTU]

Before you start reading today’s edition of the Capitals, feel free to have a look at the op-ed “EU’s ‘Mobility Package’ will negatively impact citizens, climate and the economy” written by a number of EU transport ministers exclusively for EURACTIV.

Missing ammunition and right-wing extremism. Defence Minister Annegret Kramp-Karrenbauer (CDU) announced on Tuesday (30 June) that she would be dissolving one of the four units of the Special Forces Command (KSK) following reports of right-wing extremism within its ranks.

The following day (1 July), she issued what the German press is referring to as her final warning to the rest of the group, claiming she will not rule out further consequences if there are no internal reforms. EURACTIV’s Sarah Lawton has the full story.

EU fiscal watchdog wants to scrap ‘unrealistic’ 60% debt limit. The European Fiscal Board on Tuesday (1 July) recommended to get rid of the EU’s debt threshold of 60% of GDP and instead adopt realistic debt targets specific to the bloc’s national economies. Jorge Valero has more.

France suspends involvement in NATO naval mission – EU meeting on Turkey. France has decided to withdraw from a NATO naval mission (Sea Guardian) in the Mediterranean following an incident in the Eastern Mediterranean in which France says Turkish frigates were “extremely aggressive” towards a French navy vessel participating in a NATO mission in the area.

Tensions with Turkey have escalated and Paris accuses Ankara of shipping arms to Libya in defiance of a UN embargo. Meanwhile, the Foreign Affairs minister of Greece,  Nikos Dendias, which is on the same page with France regarding Turkey’s role in the Mediterranean, visited Libya yesterday and held a meeting with president of the Libyan House of Representatives Aguila Saleh, an opponent of Fayez al-Sarraj, Prime Minister of the UN-backed Government of National Accord. Read more.

Meanwhile in Paris, former health ministers of Health were questioned over the Covid-19 crisis. Both Marisol Touraine and Roselyne Bachelot, former ministers of Health under Francois Hollande and Nikolas Sarkozy respectively, were heard by the Assemblée nationale on 1 July the day after a hearing with Agnès Buzyn. The MPs asked them about the management of the crisis, especially about the lack of surgical and FFP2 masks. Both assured that the strategic stocks were sufficient when they were in office. Xavier Bertrand, who held office from 2005 to 2007 and from 2010 to 2012, will be interviewed today. (Anne Damiani | EURACTIV.FR)

No travel to Western Balkans. Austrians were warned against travelling to Bosnia-Herzegovina, Serbia, Albania, Kosovo, Northern Macedonia and Montenegro, according to information published on the foreign ministry’s website on Wednesday (31 June). Austrians have been requested to leave these countries given the increasing number of coronavirus infections there.

By comparison, Tuesday’s joint EU decision provided for the lifting of entry restrictions for 14 third countries, including Serbia and Montenegro. For the time being, however, this does not change anything in the Austrian border regime. Even before the travel warnings, travellers from these Western Balkan countries had to undergo a two-week quarantine if they were unable to show a negative coronavirus test. (Philipp Grüll | EURACTIV.de)

Belgium keeps border closed to non-Europeans until 7 July. Despite the EU recommendation to member states on lifting travel restrictions for 15 third countries from 1 July, it is not certain whether Belgium will follow it. Brussels will not open its borders to travellers from the 15 white-listed countries  “at least until 7 July,”, according to Belgian foreign minister Philippe Goffin. Students, high-skilled workers, people working for international organisations and sailors will be included in the list of those who can travel. (Alexandra Brzozowski, EURACTIV.com)

Snus smuggling: a business worth millions. The smuggling of snus is again making headlines in Finland not only because it’s big business, but also because trafficking the substance is spreading the coronavirus. EURACTIV’s Pekka Vänttinen has the details.

Italy retains quarantine for non-EU arrivals. While the EU’s external borders reopened for citizens of 14 countries as of Wednesday (1 July), Italy has decided to retain voluntary quarantine measures for people coming outside of the Schengen Area with a decree signed by the Italian Health Minister Roberto Speranza. Read more.

Spain, Portugal reopen joint borders. After four months under the state of alarm, Spain and its Iberian neighbour, Portugal, reopened their joint borders on Wednesday (1 July) to mark the return to the so-called ‘new normal’ life after the COVID-19 pandemic, with a focus on the tourism sector, one of Spain’s key economic engines. EURACTIV’s partner EFE has more.

Suspended sentence for ‘child pornography’ diplomat. Former Hungarian ambassador to Peru, Gábor Kaleta, was sentenced to a one-year suspended prison and a financial penalty of about €1,500 after he pleaded guilty to child pornography charges on appeal, Blikk.hu reported. Back in April last year, Kaleta was removed from service and brought home after more than 19,000 child pornography photos were found on his devices.

However, while Kaleta was officially charged in November, the prosecutor’s office failed to inform the public and the cause of his removal was not communicated last spring by the foreign ministry, Index, who first broke the story in February, reported. (Vlagyiszlav Makszimov | EURACTIV.com)

The change of heart was in reaction to further EU sanctions on Nicolas Maduro´s regime followed by the expulsion of the Head of the EU delegation from Venezuela. “We consider this an important moment that requires a reaction,“ said Foreign Minister Ivan Korčok, adding that the EU needs a unified position to which Slovakia wants to contribute. (Zuzana Gabrižová | EURACTIV.sk)

Voting ban for COVID-positive patients needs explaining. Croatia’s Constitutional Court has requested the State Electoral Commission (DIP) to explain within 24 hours its voting ban for persons infected with COVID-19 as part of the oversight of the constitutionality and legality of elections, Court president, Miroslav Separovic, told public media outlet Hina on Wednesday.

The DIP partially amended recommendations concerning the arrival of eligible voters at polling stations for the parliamentary elections set for 5 July in the event they were to have a high body temperature. Read more here. (Karla Juničić, EURACTIV.hr)

PM calls for EU budget deal before summer. Prime Minister Janez Janša spoke with European Council President Charles Michel and stressed the need for the EU to adopt the next seven-year budget before the summer break. In the video meeting, Janša also called for additional funds for the EU cohesion policy, his office said.

The prime minister said the EU should not be deceived by the relatively favourable epidemiological situation, which could change quickly, and should focus on the key goal of agreeing to a recovery package that would help those member states that have been hit the hardest and have the weakest capacity to recover. (Zoran Radosavljević | EURACTIV.com)

Romania comes up with its recovery plan. Romania’s government presented Wednesday (1 July) a massive plan of investments and other measures to relaunch the economy. The plan includes investments of more than €100 billion over the next decade in transport infrastructure, healthcare, education or its energy systems, but it gives no clear timeline and the financing sources are rarely mentioned.
Most of the projects are ideas floated by several governments over the years – such as building tens of new hospitals, renovating thousands of schools or building a vast network of highways – but it gives no clear solution as to how the errors of the past can be solved and accelerate the pace of investment.
///

Country cannot lockdown, needs to go back to work. Serbian President Aleksandar Vučić warned on Wednesday (1 July) 1 that a worse epidemiological situation was in store for Serbia next fall, explaining that at this point it’s “impossible to lock the country down,” as we “need to work to live”. EURACTIV Serbia takes a closer look.

In other news, the peak of the coronavirus pandemic that is being mentioned in Serbia these days “is not actually the peak,” said epidemiologist Branislav Tiodorović on Wednesday (1 July). “The real one”, he said, will be reached in five to six days because it is measured from the events that may have caused it, such as sporting events, birthdays, weddings and other parties.  EURACTIV Serbia reports.