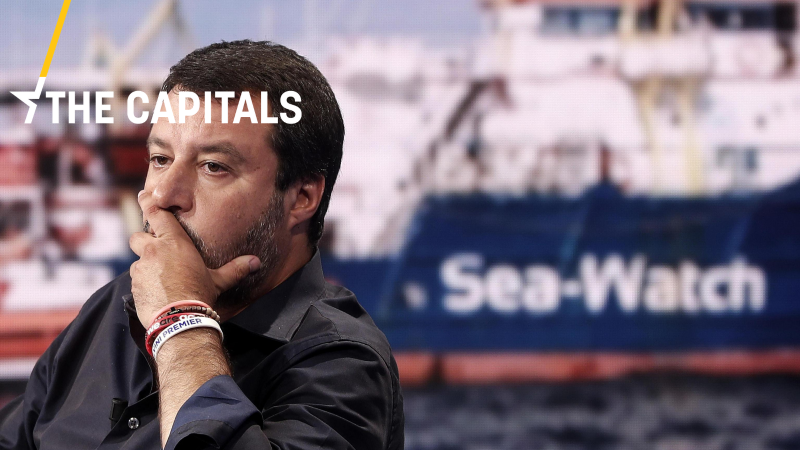 The Capitals is EURACTIV's daily newsletter from across Europe. [EPA/RICCARDO ANTIMIANI]

Before reading The Capitals today, take a look at our latest story on the EU Council deadlock over the EU top jobs: EU leaders entrench themselves over top jobs

Follow the EUCO latest developments on our live blog.

Row over Sea Watch 3. High-ranking politicians in Germany and France have strongly criticised the Italian government for arresting Carola Rakete, the captain of the ship Sea-Watch 3 who rescued migrants at risk of drowning in the Mediterranean.

On 26 June, the Sea-Watch 3 NGO boat, carrying dozens of migrants rescued in the Mediterranean, entered Italian waters off Lampedusa island despite the threat of hefty fines from Italy’s interior minister Matteo Salvini. The 31-year-old captain was then arrested and may be sentenced to 10 years in prison.

“I would expect a country like Italy to handle such a case differently”, Germany’s President Frank-Walter Steinmeier said on Sunday.

“Someone who saves lives cannot be a criminal,” Foreign Minister Heiko Maas (SPD) said, adding that saving lives is a “humanitarian obligation”, which must not be criminalised and called on the Italian judiciary to quickly clear the allegations.

“I’m sorry we arrived at this situation because the Italian government made the choice of creating hysteria on very painful topics,” Ndiaye said.

Speaking on the sidelines of the EU Council, Italy’s Prime Minister Giuseppe Conte described the situation as “political blackmail”, and pinned the blame on the captain. “In 15 days the captain could have reached other ports,” he said.

Meanwhile, the European Trade Union Confederation (ETUC) called on EU leaders to demand her release and put an end to the Italian government’s “inhumane and immoral closed port policy”.

Social Democrats seek new leader. The German Social Democrats have officially opened a call for applications for a new party leader. Since former chairwoman Andrea Nahles resigned shortly after the EU elections, claiming that she didn’t have enough support within her party, a trio of three members have been leading the party. Applicants have until 1 September to put themselves into the ring. For the first time, the Social Democrats are considering having a double chair, the model use by the Green party. (Florence Schulz, EURACTIV.de)

In an interview with the Sunday Times, Hunt revealed that he had lined up Harper for the role, in a bid to secure a Canadian-style free-trade deal with the EU. The news came as Olly Robbins, the UK government’s head Brexit Sherpa, announced he will leave his post once the new Prime Minister takes over in July. (Samuel Stolton, EURACTIV.com)

‘Europe is not a paradise for human rights’. Serious violations of fundamental rights still take place in the EU, a situation aggravated by the rise of ultra-nationalism and the loss of ethical and moral values, Michael O’Flaherty, director of the EU’s Fundamental Rights Agency (FRA), told EURACTIV’s partner EFE in an interview.

“The EU is not paradise in terms of human rights that many believe. Inequality is one of the main challenges, and action needs to be taken against politicians who spread hatred and lies,” he said. (EURACTIV’s partner EFE).

Tsipras ‘saves’ socialists. The EU socialists want to “capitalise” on their choice to cooperate with leftist Greek PM Alexis Tsipras, as with him, they can now cobble together a majority in the EU Council, diplomatic sources said yesterday at the Council.  “8 leaders are in line with the position of the European People’s Party (EPP), 7 with the European Socialist Party and with Tsipras 8 – and 7 with the Liberals,” the same sources added.

EU socialists are anxious to finally end the 15-year EPP’s domination in the EU Commission. (EURACTIV.com)

Missile investigation. Cyprus is investigating a possible missile crash near Nicosia, Reuters reported. A suspected stray missile crashed north of the Cypriot capital early on Monday, but no one was hurt, Turkish Cypriot officials said. Mustafa Akinci, the Turkish Cypriot leader, linked the incident to military operations in the Middle East but further investigations were underway by the military to establish what it was, he said.

Where is innovation? In the European Commission’s latest “European Innovation Scoreboard 2019”, Poland ranked in the 25th place, surpassing only Croatia, Bulgaria and Romania. The reasons for such a low position are the weakness of Polish research and science, but also a low level of innovation in small and medium-sized companies.  (Łukasz Gadzała, EURACTIV.pl)

The youngest vote far-right. Pro-European Slovak voters have been more motivated to participate in the European elections than those who have a negative attitude towards the EU, the Institute for Public Questions (IVO) has found. Only 11% of young voters (18 – 24 years old) voted in the EU elections in May, and their most popular party was the far-right Kotleba – People’s Party Our Slovakia.

Altogether, 23% of Slovak turned out at the EU election and although it was the highest  turned since the country joined the EU, Slovakia has repeatedly found itself at the very bottom of the EU turnout ranking. (Lucia Yar, EURACTIV.sk)

V4 is closer than Renew Europe. Czech PM and leader of the ANO party, Andrej Babiš, which belongs to the liberal Renew Europe group, has said that he feels closer to Visegrad 4 than his own EU political family.

“Regarding my position, the V4 is closer to me than some positions of the group,” he said.(Aneta Zachová, EURACTIV.cz)

Coalition partner wants a minister to resign. Croatian People’s Party (HNS), a government coalition partner, has demanded the dismissal of Public Administration Minister Lovro Kuscevic over his failure to declare his property holdings. “We are not insisting on his criminal liability, that is up to the relevant institutions to determine, but according to publicly available information, Kuščević most probably used his political influence for personal gain”, the party said. The government replied that “Ultimatums are out of question”. (Željko Trkanjec, EURACTIV.hr)

Serbia’s GDP growth lowest in the region. In the first quarter of 2019, the economic activity in Serbia slowed down significantly and saw the lowest GDP growth – 2.5% – out of the 11 Central and Eastern European (CEE) countries, Faculty of Economics Professor Milojko Arsic has said. (beta.rs, EURACTIV.rs)