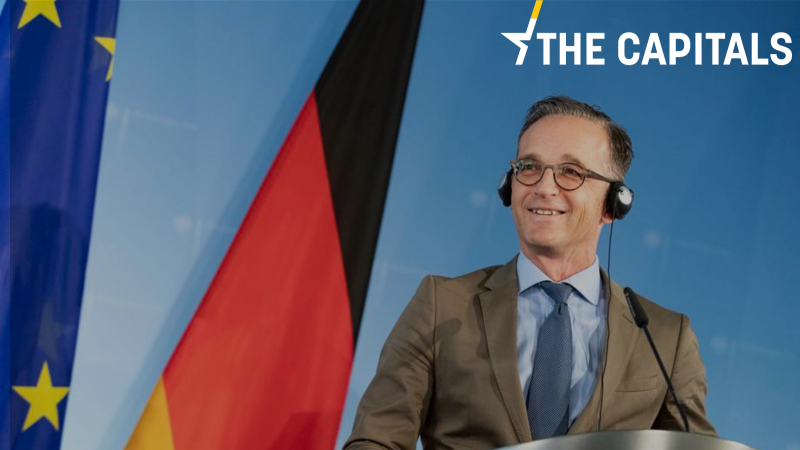 The Capitals brings you the latest news from across Europe. [EPA/HAYOUNG JEON]

Before reading The Capitals today take a look at EURACTIV’s “Commissioner Tracker”.

Poland’s responsibility? German foreign affairs minister Heiko Maas has said Poland should be one of the countries bearing the greatest responsibility for the EU’s future, regardless of which political party currently governs in Warsaw.

According to him, following Brexit the EU cannot be based solely on German-French authority, which needs to be complemented with other important states, such as Poland.

“For countries such as Italy and Spain in the South and Poland in the East, we need to give a greater share of responsibility. And this cooperation needs to be pragmatic,” Maas said.

“I know this will not be easy. However, the fact that the current governments in Italy and Poland are taking a different course in European politics should not mean excluding them from responsibility […] we are all responsible for something greater: the future of the EU,” Maas added.

Meanwhile Krzysztof Szczerski, who was nominated by the Polish government as the country’s next EU Commissioner, has withdrawn his candidacy. He said Poland was offered the agriculture post, an area he is not familiar with.

Szczerski is an advisor to Polish president Andrzej Duda and specialises in foreign and security policy, not in agricultural issues. (Łukasz Gadzała), EURACTIV.pl)

Tech giant deal. President Macron announced on Monday that the G7 had reached “a very good agreement,” on taxing tech giants, following criticism from US President Trump, who had previously threatened to tax French wine in response. (Aline Robert, EURACTIV.fr)

The agreement will see the tech giants pay Paris’s 3% levy until the OECD reaches an agreement on international corporate taxation, expected to come by the end of 2020. After this time, the French have agreed to reimburse any difference between the payments made in Paris and the OECD rate.

Whilst Trump did not specifically say that the proposed French wine tax had been formally taken off the table, the plans are widely expected to have now been shelved. (Aline Robert, EURACTIV.fr, Samuel Stolton, EURACTIV.com)

Brexit dividend. A Dutch government agency revealed that nearly 100 companies have already relocated from the UK to the Netherlands due to Brexit-based concerns. The Foreign Investment Agency said more than 300 others are also considering the move, as the 31 October deadline approaches. Businesses range from IT, finance and technology to media providers and advertisers.

The agency had previously estimated that the Brexit malaise had netted the Netherlands more than 2,500 jobs. However, the grass could be less greener than previously thought, after Dutch media reported the government is considering scaling back a generous tax break for freelancers. (Sam Morgan, EURACTIV.com)

Corbyn ‘jeopardising’  Tory takedown, Lib Dems say. Labour leader Jeremy Corbyn’s plan to lead an emergency cabinet jeopardises “the chances of a no-confidence vote gaining enough support,” Lib Dem leader Jo Swinson has said. In a letter to Corbyn on Monday, Swinson added: “As you have said that you would do anything to avoid no deal, I hope you are open to a discussion about how conceding this point may open the door to a no-confidence vote succeeding. Its success must be the priority.”

BERLIN
Tax the rich!  German Social-Democrats’ executive committee endorsed on Monday (26 August) a working group proposal to introduce a 1% wealth tax on assets such as property, real estate, company shares and cash. The party wants to use the extra revenues to boost public investment in infrastructure.

Interim leader Thorsten Schaefer-Guembel said the move was meant to sharpen the struggling party profile. Voters in the eastern German states of Saxony and Brandenburg head to the polls on 1 September for crucial state elections, in which far-right AfD is expected to score high. Opinion polls in Germany currently show the AfD and SPD are running neck-and-neck. (Claire Stam,EURACTIV.de)

Amazon’s ‘holocaust’.The failure to protect the environment and an outdated approach to economic development are the main factors behind the fiery “holocaust” raging in the Amazon region, Marina Silva, Brazil’s most prominent environmentalist, has told EURACTIV’s partner EFE. Silva, who served as Brazil’s environment minister from 2003-2008, added that the global environmental crisis, in general, has created more than 150 million “environmental refugees”.

She also partly blamed far-right President Jair Bolsonaro for the current situation in Amazon because he has rolled back environmental regulation and called for expanding the agriculture industry in the region. (EuroEFE.EURACTIV.es)

Close to a new government. Nicola Zingaretti, leader of the centre-left Democratic Party (PD), is confident that his party will clinch a deal with anti-establishment Five Star Movement. “I think we are well on track now,” he said. PD will accept Giuseppe Conte as prime minister, cutting Five Star leader Di Maio out of the government.

Today and tomorrow, President Sergio Mattarella will hold the second and possibly last round of talks with parliamentary groups to decide whether to assign a mandate to ask for a vote of confidence in the Parliament. (Gerardo Fortuna, EURACTIV.com)

Coalition collapses. Romania’s ruling social democrats PSD have lost the majority in parliament after their junior partner, the liberal ALDE, decided to quit the government. Calin Popescu Tariceanu, the leader of the liberal democrats, said ALDE is now part of the opposition and it may form a new alliance with Pro Romania, a party founded by ex-members of PSD.

Nonetheless, Prime Minister Viorica Dancila said the government would continue and PSD will try to form a new majority so it could continue the implementation of its program. PSD may soon face a hurdle as the opposition liberal party PNL announced it would push for a new confidence vote, and Tariceanu said ALDE would vote in favour of toppling the government. (EURACTIV.ro)

Head of anti-corruption body sent as consul in Spain. Bulgarian PM Boyko Borissov has defended the government’s decision to send Plamen Georgiev, the first head of the Commission for Combating Corruption and the Withdrawal of Illegally Acquired Property – KPKONPI, to a diplomatic post in the Spanish city of Valencia.

Georgiev was appointed in March 2018 as head of KPKONPI but recently resigned over the so-called “apartment scandal”. Reportedly, he has had serious difficulty to justify what income allowed him to buy a luxurious apartment in Sofia two years ago. KPKONPI has exclusive power to investigate high-level corruption and illicit enrichment of politicians. (Georgi Gotev, EURACTIV.com)

Capital controls are over. The Greek government has fully lifted the capital controls introduced during the crisis in 2015 on Monday (26 August), in a sign of its growing economic confidence following the end of the bailout programme last year. Read more: Greece ends capital controls after 50 months

Meeting with Shell. Cypriot President Nicos Anastasiades will hold a crucial meeting today with representatives of Royal Dutch Shell to discuss the last details over the development of “Aphrodite” gas field. According to Philnews, a draft plan suggests that it is projected that 57.1% of Aphrodite’s net income will be allocated to the state.

Croats do not like the Internet. The Croatian Institute for Economy has published a survey, which found that 21% of Croats have never used the Internet. Even in the business sector, only 73% of companies have an official website while 27% of citizens do online shopping compared to the 50% EU average. (Tea Trubić, EURACTIV.hr)

Belgrade among the least transparent European capitals. Belgrade ranks among the least transparent capital cities in Europe, according to the latest survey covering European 26 capital cities, conducted by TI. The transparency levels of the cities were assessed based on 14 indicators and Serbia’s capital showed good practice only in three. Belgrade got the same position as Sarajevo, Athens, Stockholm, Chisinau, and Yerevan.(beta.rs, EURACTIV.rs)