Biden-Merkel meeting: The devil is in the detail 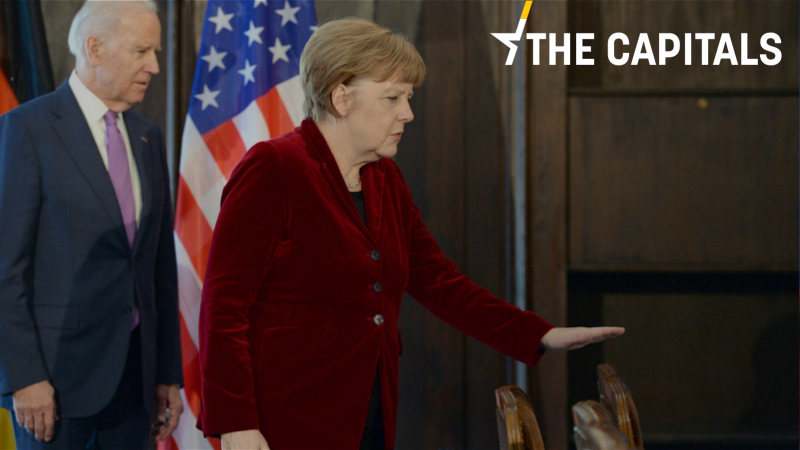 Liik added that if Berlin and Washington come up with an overall transatlantic policy on energy trade with Russia - taking into account the political, energy security aspects and the green agenda – then Eastern Europeans may lift their objections to the project. [EPA/ANDREAS GEBERT]

Before you start reading today’s edition of the Capitals, feel free to have a look at the article “Reform of EU medicines agency: Where do EU institutions stand?“.

A message from YEA: Become a Young European Ambassador for the Western Balkans: Connect with other cultures, Learn new skills, Influence your peers.

Apply and send us your video presentation: remember, you have up to one minute to introduce yourself. Apply before 30 JULY 2021 at https://webalkans.eu/en/yea/become-a-yea/

On Thursday (15 July), German Chancellor Angela Merkel will visit US President Joe Biden in the White House in what will be her last trip to Washington after nearly 16 years in power. The general objective is to reset transatlantic ties. But the details over the West’s strategy toward China and the future of Nord Stream 2 pipeline will determine the sustainability of the touted fresh start.

EURACTIV Germany contacted politicians and analysts who highlighted their expectations from this visit. Read more.

Slovenia to prioritise e-mobility, alternative fuels in transport talks. The main transport priorities of Slovenia’s EU presidency are e-mobility and alternative fuels, Infrastructure Minister Jernej Vrtovec said as he presented the presidency agenda to the European Parliament’s Transport Committee on Tuesday. This will also be the main topic of an informal transport ministerial scheduled for September. More.

German military launches space command centre. Germany’s first space command centre with defence operations including military reconnaissance, the overseeing of satellites and tracking of dangerous space junk was officially inaugurated by Defence Minister Annegret Kramp-Karrenbauer at the site for the Centre for Air Operations in Uedem near the Dutch border. Read more.

Austria dissatisfied with road charging directive. The European Parliament’s Committee on Transport has green-lighted revised rules on road charging – the so-called Eurovignette – on Tuesday, much to the dissatisfaction of Austria. Read more.

Lithuanian parliament votes to allow mass detention of asylum seekers. Lithuania’s parliament on Tuesday approved the mass detention of migrants and curbed their right of appeal, a move meant to deter high numbers crossing the border with Belarus but which stirred an outcry among humanitarian groups. Read more.

However, NGOs say the amendments will in legalise human rights violations and put vulnerable people in danger. Lawyers also say the amendments might run counter to the constitution. A total of 1,716 migrants have been detained at Lithuania’s border with Belarus this year so far, an increase from 81 people detained in the whole year of 2020, 46 in 2019, and 104 in 2018.

EU court rejects request to annul appointment of Portuguese European prosecutor. The EU’s General Court in Luxembourg has rejected the request submitted by attorney Ana Carla Almeida to annul the appointment of José Guerra as Portugal’s pick for the delegated prosecutor position at the new European Public Prosecutor Office (EPPO), but the magistrate announced on Tuesday that she would appeal the decision to a higher instance. Read more.

Greece toughens stance on unvaccinated. The Greek government has decided to toughen up its stance against unvaccinated citizens, introducing compulsory vaccination in nursing homes and health facilities as well as allowing only vaccinated people indoors when it comes to bars and restaurants. In case of non-compliance with the new measures, heavy fines will be imposed. Read more.

Tests show lack of antibodies for those vaccinated with China’s jab. A test of a sample of 60-year-olds vaccinated with the Chinese Sinopharm vaccine showed a quarter had no antibodies against the coronavirus, according to results from the municipality of Budapest released on Tuesday. Read more.

Slovenia says EU should accept the whole Western Balkans. Slovenian President Borut Pahor has said the EU is not complete without enlargement to include the whole of the Western Balkans and it should speed up the accession process. Read more.

Polish court delays ruling in landmark EU row case. Poland’s top court on Tuesday delayed issuing a ruling in a landmark case on whether the Polish constitution or EU law have primacy in the member state, amid a bitter row with Brussels. Read more.

Romania has work to do before drawing cohesion funds. Romania, one of the main beneficiaries of the EU’s cohesion policy, still has a lot of work to do on its operational programmes before it is able to draw any funds from the 2021-2027 period. Read more.

Croatian finance ministry willing to talk with hospitality sector. Cafe and restaurant owners on Tuesday called on the government to reduce VAT on beverages to 13% or to treat labour costs as a tax deduction, which would help the hospitality sector to recover, develop and increase wages. Read more.

EU: Progress in BiH’s reforms is limited. Following the fourth Stabilisation and Association Council with Bosnia and Herzegovina (BiH), the EU’s chief diplomat Josep Borrell said that there has been some momentum and steps taken since last year. Read more.