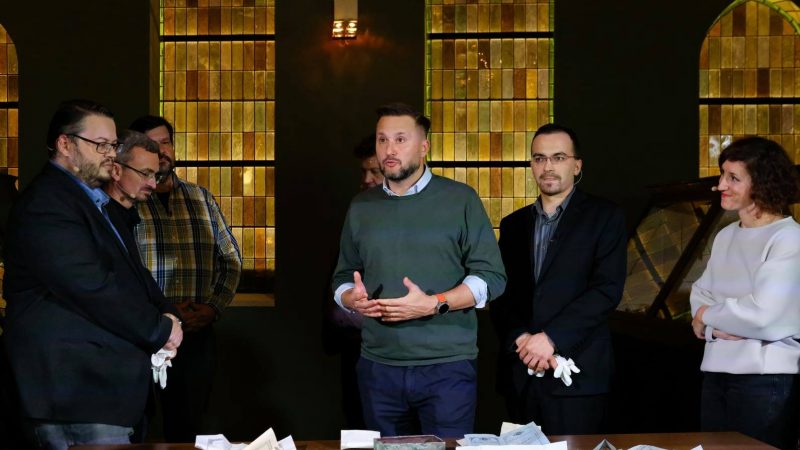 Upholding the democratic principles and liberal values is one of the main goals of the Pact of the Free Cities, a platform Vallo co-founded with the mayors of Prague, Budapest, and Warsaw. [Matúš Vallo/Facebook]

Democracy was born in towns and cities, and local leaders are closer to the people than national governments, Matúš Vallo, the mayor of Bratislava, told EURACTIV Slovakia.

“For democracy to function, it is very important that people trust their local representatives. They should see trustworthy politics and transparent institutions in places where they live. Where national governments fail, it is the cities and regions, who stand by people and democracy,” he said.

Upholding the democratic principles and liberal values is one of the main goals of the Pact of the Free Cities, a platform Vallo co-founded with the mayors of Prague, Budapest, and Warsaw in 2019.

“The Pact of Free Cities was founded in an extraordinary time when four mayors of four capital cities in Central and Eastern Europe were elected in a short time as a clear signal from voters for change and an alternative to their national governments,” Vallo explained.

The mayor continued that the Pact of Free Cities proved to be a resilient platform, which is underlined by last year’s expansion when 20 more cities worldwide joined.

This January, the expansion will continue with Brussels, Milan and Rome. In the second part of the year, a summit of the Pact is planned in Prague, as part of the Czech EU Council presidency.

Bratislava’s mayor also said that cooperation among the cities is not just declarative, but they are coordinating various affairs on an everyday basis, and this cooperation extends to the lower level of city halls.

Liberal island in the illiberal ocean

Besides liberal values, climate change is another important topic on the Pact’s agenda. Under Vallo’s leadership, Bratislava has become a strong supporter of Green Deal commitments.

Currently, the fight against climate change is a cross-sectional topic felt in all other urban development areas, such as transport or urban planning, and is a vital part of strategic documents.

According to the mayor, cities are once again crucial players in the struggle against climate change as they are home to the majority of the population.

“The pandemic showed us that cities can be very effective and quick in providing pilot projects and innovative solutions to problems. Moreover, they stimulate the citizens towards responsibility and necessary change,” Vallo said.

Vallo believes that radical changes in people’s lives are necessary concerning climate change. Even more essential change in corporate behaviour, which should be further stimulated by a framework set by the national governments.

In 2018, Matúš Vallo won the mayor’s seat with a comprehensive “Plan Bratislava”. This document will also serve as a basis for Bratislava 2030, the vision of the city for next ten years, which is currently in development. In 2030, Vallo wants Bratislava to be a “green and compassionate city”.

Both documents deal with a wide range of issues with the ultimate goal of providing high-quality public spaces, sustainable forms of transport with an emphasis on public transport and cycling, and the provision of affordable rental housing.

Regarding public spaces and big projects, Vallo decided to create a Metropolitan Institute of Bratislava, responsible for the planning and implementation of various projects.

Transport has long been an issue in the city with traffic jams, unpopular public transport, and a lack of cycling infrastructure. Vallo noted that before the pandemic, approximately 40% of the population used individual transport on an everyday basis, while 60% used environmentally friendly forms of transport.

“Bratislava is preparing various activities with the aim of popularising environmentally friendly forms of transport, including new parking policy and extending the network of cycling lanes,” Vallo said.

More and more European cities have recently opted for a total or partial ban of cars in the city centres.

Vallo said that the goal of Bratislava is to curtail cars in the centre, but using other methods of doing so, such as parking policy, extending cycling lanes, bus lanes and tram lines, so there will be no need to use a car.

Digital platforms are not an issue

The goal is to provide affordable housing for young families, the elderly, poor people, and essential workers, such as school teachers or medical personnel. In this regard, the city is preparing construction projects for city apartment buildings and reconstructing old apartment blocks that belong to the city.

When asked about the influence of digital platforms offering short-term rental services on housing. Vallo said Bratislava is not in the same position as Prague, Lisbon or other big European cities.

“We do not have data to confirm the relationship between short-term rental platforms and affordability of housing. From what we can see, Bratislava does not have the same problem, although we felt the decrease of tourists over the last two years,” Vallo concluded.