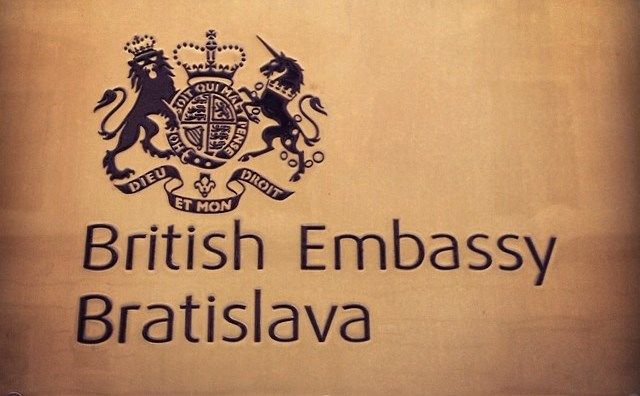 The UK's British embassy said it would be willing to change its sign if Slovak law required it. [Flickr]

Slovak media covering the Brexit process could be fined up to €6,600 euros for using ‘Britain’ to refer to the United Kingdom, as a Slovak government agency announced they will start enforcing an obscure law from the 1990s.

The news outlets have been called out by a state agency charged with enforcing uniform use of official country names in publications, based on an obscure 1995 law passed when Slovakia was just finding its feet as a newly independent nation.

The Bratislava-based Geodesy, Cartography and Cadastre Authority said it was acting on dozens of tips from readers and planned to hold a seminar on correct terminology for the media before it starts collecting fines.

A letter it sent to all Slovak media last week warned they had “repeatedly broken the law” by using “Britain” or “Great Britain” in coverage of London’s planned exit from the EU rather than “United Kingdom of Great Britain and Northern Ireland”.

“Our key goal is to raise awareness, we have never fined anyone in the past but we are (now) ready to enforce the law,” agency chief Maria Fridrichova said.

Most media had made no changes a few days after receiving the agency’s letter. “I think the letter is absurd and I will not instruct our editors to use different terms,” said Beata Baloghova, editor in chief of the SME newspaper.

A list of official country names on the agency website showed that a shortened “United Kingdom” is permissible, as well as abbreviated names of other states like Germany and Macedonia.

For its part, the British Embassy said it did not mind the term “Britain” in Slovak media. “The embassy’s official logo says ‘British Embassy Bratislava’ but we will comply with the Slovak law if required,” a spokeswoman said.

Slovakia’s official name is The Slovak Republic. “Slovakia” is lawful in published references.

One response to “‘Britain’ could cost Slovak media thousands in fines”