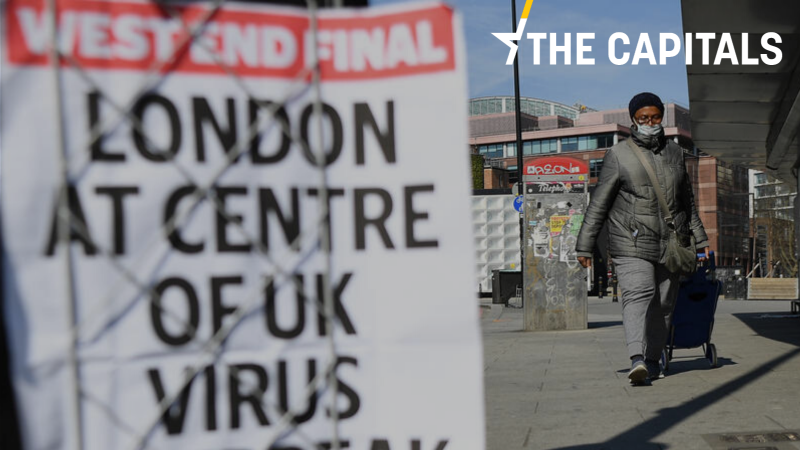 The UK currently has only 8,000 ventilators available, though it has placed orders and agreed contracts for an additional 18,000. [EPA/Andy Rain]

Before you start reading today’s edition of the Capitals, feel free to have a look at the article “Leaders clash over stimulus against pandemic, pass the hot potato to the Eurogroup“.

Germans discuss the ‘calm before the storm’ on coronavirus. In a press conference yesterday (26 March), Health Minister Jens Spahn of the Christian Democrats (CDU) and the president of the Robert Koch Institute, Lothar Wieler, told reporters that the peak of infections is yet to come and outlined the government’s measures to prepare for it. “No one can say what’s coming in the coming weeks. We must manage to slow down the rate of new infections,” Spahn said. Sarah Lawton reports from Berlin.

A falling French economy. French economic activity is down 35%, according to the French National Institute of Statistics and Economic Studies, known as INSEE. Meanwhile, France’s Institut de Conjoncture estimates that one month of confinement would cause the French economy to lose 3% of annual GDP, while two months of confinement would result in a fall of 6%. These estimations are “aligned with the observed decrease in electricity consumption in France, which is currently about 20% lower than during more ‘normal’ times. (EURACTIV.FR)

Special powers approved, more lockdown clarification to come. After the main political parties broke the government formation stalemate earlier this month and agreed to grant the government under Prime Minister Sophie Wilmes special powers for the next six months to bridge the coronavirus health crisis, the Belgian parliament approved the bill by 104 votes in favour, 8 against (PTB) and 16 abstentions (Vlaams Belang). Alexandra Brzozowski has the details.

Curfew in virus-ridden Tyrol prolonged. As Austria’s COVID-19 infection rate climbed to 6,398 on Thursday afternoon (26 March) with 49 deaths, authorities decided to prolong the curfew until 13 April in Tyrol, the city, in which political negligence led to a massive spread of the virus. On top of that, the public prosecutor opened investigations against Tyrolean politicians on “suspicion of negligent endangerment of humans through transmittable diseases”. Philipp Grüll reports.

Political parties differ on whether government did enough on COVID-19. A survey commissioned by the Finnish Broadcasting Company shows that 49% of citizens consider the Government’s actions to tackle the coronavirus timely and appropriate, while 46% said that restrictions could have been tighter.  EURACTIV’s Pekka Vänttinen reports.

Non-protected health workers. Since the start of the COVID-19 outbreak, Italian health professionals have been paying a high price. 41 doctors have died due to the virus and a total of 6,205 health workers have been infected so far.

“The data concerning our profession is worse than those recorded in China, which stopped at 3,300 infected doctors and 23 deaths,” said Filippo Anelli of the national federation of doctors, in a letter published in the British Medical Journal.

This would have been largely avoidable if healthcare workers had been properly informed and equipped with adequate personal protective equipment (PPE) such as masks, gloves, disposable gowns and protective visors, says the letter. (Gerardo Fortuna | EURACTIV.com)

Mitsotakis backs coronabonds. At the European Council on Thursday (26 March), Greek Prime Minister Kyriakos Mitsotakis reiterated his support for issuing eurobonds to face the coronavirus pandemic, saying the nine countries which signed a letter calling for them account for 57% of the eurozone’s GDP.

Mitsotakis emphasised the need for Europe to take bold initiatives, noting that the United States had announced a $2 trillion economic support package. He also highlighted the mismatch between the rhetoric used to describe this crisis (unprecedented, etc.) and the measures taken so far, and called for all options for a single European response to be explored. (Sarantis Michalopoulos)

In other news, Portugal’s central bank has estimated on Thursday (26 March) that because of the COVID-19 crisis, the country’s GDP will fall by 3.7% in a baseline scenario and 5.7% in an adverse scenario for the year 2020, and that the unemployment rate is expected to rise above 10%. (Lusa.pt)

Parliament voting online. As there are now 1,221 coronavirus cases and 16 total deaths as of Thursday (26 March), the parliament’s lower chamber voted to change its rules, allowing it to vote online until 30 June. The parliament is set to vote on the government’s ‘anti-crisis’ measures, which, include PLN212 billion  (about €47 billion) for payroll and tax breaks. (Łukasz Gadzała | EURACTIV.pl)

Dire situation for businesses. A third of businesses say they have closed their operations due to coronavirus restrictions and lost their only source of revenue, a new poll by the association of young entrepreneurs of Slovakia showed. While 37% will have to either fire or force their employees to work part-time, almost 60% would only be able to pay wages and invoices for one month. (Zuzana Gabrižová | EURACTIV.sk)

Emergency aid. The Czech Republic has offered to donate 10,000 protective suits for medical staff to Italy and Spain. “We can afford it and they desperately need them,” Interior Minister Jan Hamáček has said. The Czech Republic has approximately 250,000 of these suits and more are on their way. However, the Czech government refused to send military doctors to Southern Europe. “They cannot go, they are needed at home. They help and they will do so in the future. the Czech army is an important part of our fight against the coronavirus outbreak,” Minster of Defence Lubomír Metnar wrote on Twitter. (Lukáš Hendrych | EURACTIV.cz)

Before the government’s ideas became public, one of the richest Bulgarians, Kirill Domuschiev, who bought Nova TV, which is one of the country’s two largest private television stations, had urged the state to help the media. Along with television, he also acquired some of the most visited online media outlets in the country.

Domuschiev contracted COVID-19 in March after catching it in France but has since recovered. (Krassen Nikolov | EURACTIV.bg)

The troops are coming home. Croatia will repatriate its troops who have completed their tour of duty in Afghanistan as part of NATO’s Resolute Support peace mission and whose return was temporarily delayed due to the coronavirus pandemic, Hina reported.

“We have ascertained that their further stay in Afghanistan […], represents a health and safety risk and that the return of all members of the 11th contingent is necessary. The safety of every Croatian soldier is an absolute priority,” said Defence Minister Damir Krsticevic.

In other news, Prime Minister Andrej Plenkovic said on Thursday (26 March) that measures to curb the coronavirus pandemic were being taken, underscoring that quarantine and isolation were becoming essential for preventing the spread of the virus.

“Today over two billion people in the world are living under movement restrictions, which has really never happened before. In Croatia 32,000 people are in self-isolation,” Plenkovic said, adding that “everything we do is in the interest of our citizens’ health and safety”. (Karla Junicic, EURACTIV.hr)

Serbia struggling with Convention on Social Rights, says Council of Europe. When it comes to being harmonised with the EU Social Charter which applies to children, families and migrants, Serbia ranks at the bottom of the list, the European Committee of Social Rights announced on Thursday (26 March). EURACTIV Serbia looks into why this could be.

In other news, Slovenian MEP Tanja Fajon said the COVID-19 pandemic should not be an excuse to suspend democracy and that no government should be allowed to wield unlimited power.

“Since many governments have declared a state of emergency in order to efficiently confront the real threat that the coronavirus poses, we have to make sure that their responses are balanced and proportional,” said Fajon, the chair of the European Parliament Delegation for relations with Serbia, Danas daily reported on Tuesday (26 March)

According to her, EU Commissioner for Home Affairs Ylva Johansson had warned that the complete closure of Serbian borders will “present a major problem, especially for the Serbian citizens who should be allowed to safely return to their homes.” China’s help to Serbia comes as no surprise, Fajon added, given the relationship between the two countries.

“One shouldn’t forget, however, that the EU with its member states, remains Serbia’s biggest donor and that of all the Western Balkan countries,” recalled Fajon. (EURACTIV.rs)