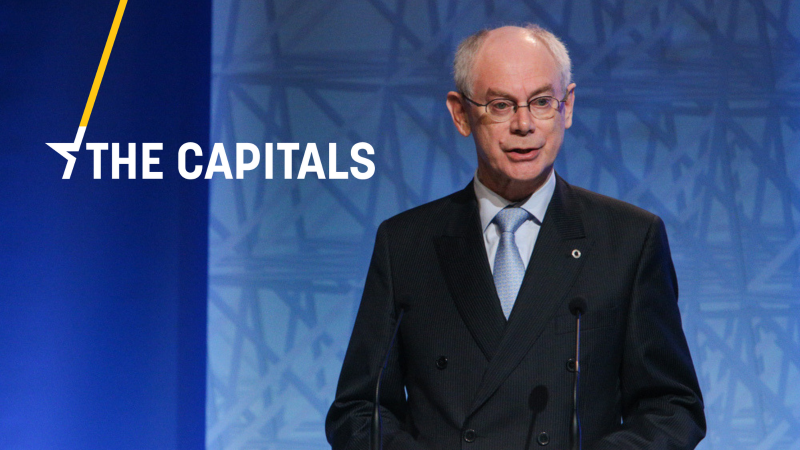 “In every normal country, Theresa May would have already resigned a long time ago,” former European Council President Herman Van Rompuy told members of his Belgian CD&V party. He said the UK had less leverage in the negotiations: “The British are much more dependent on us than we are on them.”

He also said that a soft Brexit without major consequences and a transition period in which nothing really changes was likely. The best case scenario will be a new referendum with a good outcome, otherwise a Brexit without a deal.

“I am personally convinced that if the UK leaves the EU, they will return one day,” Van Rompuy added. (Alexandra Brzozowski, EURACTIV.com)

Third-vote drama: Controversy hit the House of Commons yesterday, as Speaker John Bercow ruled out the possibility of May’s Brexit plans returning for a third vote, without “substantial” changes. “What the government cannot legitimately do,” Bercow said, “is submit to the house, the same proposition, or substantially the same proposition as that of last week, which was rejected by 149 votes.”

US joins the east Mediterranean group: US Secretary of State Mike Pompeo will attend a crucial meeting of Greece, Cyprus, and Israel on 20 March in Jerusalem. The three countries are expected to announce soon the signature of an intergovernmental agreement for the EastMed, a pipeline designed to transport offshore gas reserves from Cyprus via Greece to other EU countries.

The move will likely displease Ankara, which opposes the gas drillings in the region while sources told EURACTIV.com that a common declaration would send a “message” to the Turkish government.

“This meeting highlights the US support for the tripartite cooperation between Greece-Cyprus-Israel and marks the enhanced role of the three countries in security and energy developments in the Eastern Mediterranean region,” the sources said. (Sarantis Michalopoulos, EURACTIV.com)

The deep state and the highways: Romania’s new transport minister, Razvan Cuc, surprised the audience at the Auto Industry Forum, which EU Internal Market Commissioner Elzbieta Bienkowska also attended, when he said Romania had few highways because of ”the deep state”.

Cuc said public servants refuse to sign additional acts to contracts fearing prosecutors would investigate them. The deep state mantra repeated by the socialist PSD government says rogue intelligence officers collaborated with anti-graft prosecutors to punish politicians that did not do their bidding. Romania remains one of the most corrupt EU member states and the government has tried in recent years to decriminalise several corruption offences. (EURACTIV.ro)

French TV not a big fan of EU news: Daily TV news programmes in France are not keen on EU news according to a study. In 2018, only 13.2% of the TV news dealt with an EU-related topic while EU institutions were represented 2.7% of the whole TV news programmes. The two main candidates for the Commission presidency, centre-right Manfred Weber (EPP) and Frans Timmermans (Socialist), have been the subject of eight and four TV news bulletins, respectively, compared to 227 for Donald Trump.

Electromobility in the spotlight: The Polish-German Economic Forum took place in Berlin with the participation of Jadwiga Emilewicz, Polish minister for entrepreneurship and technology, and Peter Altmeier, Germany’s minister of economy. Both sides emphasised the need for further cooperation, especially in the fields of electromobility, AI and EU digitisation. Emilewicz said “our common objective is to work on a common energy policy by 2040”.

Digital tax: PM Mateusz Morawiecki did not rule out a digital service tax (DST) in Poland. He said he regularly talks about it with Emmanuel Macron, Angela Merkel and other EU leaders. “I’ve read that Austria is preparing to introduce such a tax despite the lack of consensus at EU level. This shows that if there is no agreement on the issue among the member states, we will need to act on our own”. (EURACTIV.pl)

Ultimatum to Catalan government over separatists symbols: Spain’s Electoral Board threatened Catalan President Quim Torra with criminal charges on Monday if he does not withdraw separatist symbols from official buildings within 24 hours.

The board argued that the yellow ribbons and signs demanding the freedom of Catalan leaders in prison, due to their involvement in the unilateral call for the independence of Catalonia, are not in line with the neutrality required for institutions during the electoral campaign. Spain will hold snap elections on 28 April.

This is the second ultimatum the institution has given to the president of Catalonia, who has already ignored previous deadlines. (Beatriz Rios, EURACTIV.com)

Centre-left front: The newly elected leader of the socialist Partito Democratico (S&D), Nicola Zingaretti, is trying to rebuild a centre-left front ahead of the upcoming regional and EU elections. Yesterday, Zingaretti announced he would meet Roberto Speranza, the leader of a leftist political force, which split from the PD almost a year ago, due to strains with former leader Matteo Renzi.

Murder mystery: A key witness in Silvio Berlusconi’s trial investigating notorious ‘bunga bunga’ parties died at the beginning of March. 34-year-old model Imane Fadil was allegedly poisoned as she had a high concentration of cadmium and antimony in her blood, public prosecutor Francesco Greco told the press in Milan yesterday. (Gerardo Fortuna, EURACTIV.com)

Former president’s son expelled: Václav Klaus Junior, son of the former Czech president, was expelled from the Civic Democrats (ECR) due to statements that are contrary to the party’s values. Klaus is well known for his anti-EU rhetoric and he has already been given an offer to join the Eurosceptic Independence Party, which has an EU referendum on its agenda.

End of the beef case?: Following a meeting with his Polish counterpart and EU health Commissioner Vytenis Andriukaitis, the Czech agriculture minister said he would cancel the extraordinary controls on beef imports from Poland on 25 March if Poland guarantees the adoption of measures securing the safety of its food products. Prague applied such controls on 20 February after the Czech state veterinary administration revealed 700 kg of Polish beef had been contaminated with salmonella. (Aneta Zachová, EURACTIV.cz)

The US criticises Bulgaria: In its 2018 Human Rights Report, the US State Department harshly criticised Bulgaria for physical mistreatment of detainees, harsh conditions in prisons and detention facilities and a lack of accountability in the judicial system. The report also highlighted the mistreatment of migrants and asylum seekers, corruption in all branches of government and violence against ethnic minorities. Authorities took steps to prosecute and punish officials, who committed human rights abuses but government action has been insufficient, and impunity prevailed. (EURACTIV’s partner Dnevnik.bg)

Janša harms Slovenia: “It is necessary to insist on the implementation of the arbitration decision at the border between Croatia and Slovenia,” Slovenian Foreign Minister Miro Cerar said in response to an interview with Slovenian opposition leader Janez Janša published on Euractiv.hr.

“I am under the impression that Janša is mixing the national and his party’s interests,” he added. “Croats want new border negotiations because they want more than what in the arbitration decision is. So Janša actually says – let’s negotiate again to give them more.” (Željko Trkanjec, EURACTIV.hr)

Protection and clarity after Brexit: The Croatian government has committed to protecting the rights of Croats living in the UK as well as UK citizens in Croatia after Brexit.

“The government is in principle prepared to enable British citizens to continue enjoying the existing rights under the condition of reciprocity,” state secretary at the Ministry of Foreign and European Affairs Andreja Metelko-Zgombić said. There are currently 653 UK citizens in Croatia.  (Željko Trkanjec, EURACTIV.hr)

NGOs condemn police behaviour: NGOs have condemned police behaviour during anti-government protests last weekend in Belgrade. They called on state authorities, independent institutions and media to “stop further polarisation between the citizens and the state and enable the foundations of democratic dialogue.” The EU Commission told EURACTIV yesterday that the government should establish a dialogue with civil society. (Julija Simić, Beta-EURACTIV.rs)

Do not touch Vučić because of Kosovo: “We should respect the legitimate institutions of Serbia and its legally elected president, and the rest will be resolved in the elections,” said BiH Presidency Chairman Milorad Dodik regarding the protests in Belgrade against President Aleksandar Vučić. “It is wrong time to send such a message from Serbia because it needs all the power to negotiate with Kosovo,” Dodik added. (Željko Trkanjec, EURACTIV.hr)

2 responses to “Brits will come back someday, Van Rompuy says”