Budget committee to look into ‘Selmayrgate’ after fury in Strasbourg 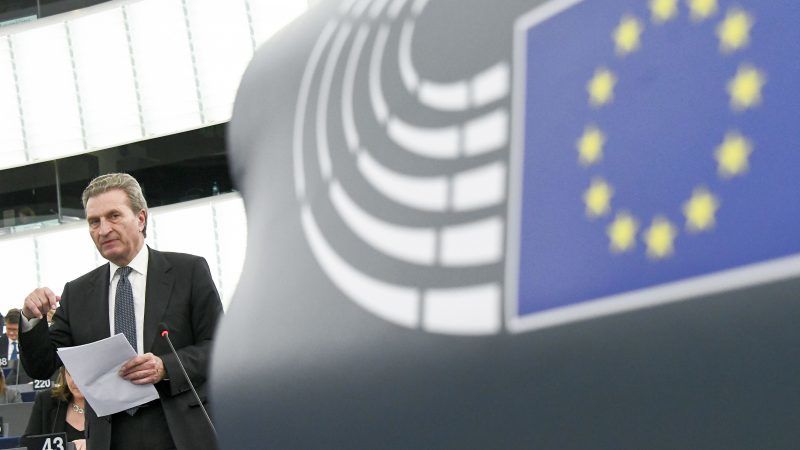 Martin Selmayr, Juncker’s former chief-of-staff, was promoted to the post of secretary-general, or the Commission’s top civil servant, in February.

But the unexpected move prompted widespread criticism from media, observers and the European Parliament that some rules may have been bent and that transparency norms were not respected.

Juncker sent Budget and Human Resources Commissioner Günther Oettinger to face the music at the Parliament’s plenary session in Strasbourg on Monday (12 March). With few voices of dissent, the EU assembly agreed to have the affair looked into by the budgetary control committee.

Success! #SelmayrGate will be fully examined by the budgetary control committee of the European Parliament! Green demand was just approved by a huge majority in the plenary. #EP

Oettinger insisted the Commission had “done everything by the book” and acted in accordance with the rules” but it soon became evident that MEPs would not be appeased by platitudes.

Dutch MEP Sophie in ‘t Veld of ALDE addressed Oettinger in a two-minute speech that received thunderous applause from her fellow MEPs.

“Taking MEPs for stupid, telling us about the wonderful new clothes of the emperor and expecting us to believe that is a stupid strategy,” in ‘t Veld said.

She said Juncker should have been at Monday’s debate “to be held accountable” for Selmayr’s promotion. She also questioned the Commission’s ability to hold its own in the face of conflict.

“If the commissioners are so easily intimidated by a civil servant, if they act like helpless children when confronted with an unexpected staff decision, then how can we expect them to stand up for European interest against Trump in a trade war, for example, or resist pressures from powerful lobbyists, or be firm with national governments that violate EU rules?” in ‘t Veld said.

She ended her speech by saying the Commission would have to choose between the EU’s credibility and Selmayr’s career.

“This stinks to high heaven,” Staes said, while de Jong quickly made the connection to a scandal that brought down the entire Commission led by Jacques Santer in 1999, due to allegations of corruption.

“I really felt that during the past week, we were back in the Santer commission in 1999, when the problem of integrity was swept under the carpet… We are going to have the same problem if we have the same arrogant stand from the Juncker Commission,” De Jong said.

Danish MEP Anders Primdahl Vistisen (European Conservatives and Reformists) said one needed to be “blind, deaf and stupid to believe what Oettinger said. This is going to damage the Commission. It’s a shame that Juncker did not have the courage to come here in person,” he said.

Juncker was due to address the MEPs in Strasbourg on Tuesday and it was not immediately clear if he would comment or take questions on ‘Selmayrgate’.

In the meantime, Oettinger sought to reassure the plenary that the Juncker Commission was keen to set the record straight, insisting that Selmayr is “not a monster” and urging MEPs to “give him a chance”.

“Corruption, scandals, intrigues – these are some of the words used by some of the speakers here today. That is why it is in my interest, in our interest, that the budgetary control carries an in-depth investigation. we have answers to all the questions,” the German Commissioner said.

“What you are doing for Europe is worse than all nationalists, Eurosceptics and extremists,” said Pascal Durand (Greens).

Others still – arguing the cause of Poland and Hungary,  two eastern ‘rogue’ member states that have been on collision course with Brussels over law and judiciary –  said the Commission no longer had the moral high ground to call anyone to account.

“If the Commission is ready to ignore its own rules, why should anyone care about what the Commission says about flaws to the rule of law anywhere?” asked György Schöpflin (EPP), while another MEP added the Commission should stop Article 7 procedures (against Poland) and “start it against yourself”.

Article 7 was launched against Poland, because of concerns about the rule of law in the country and may ultimately result in sanctions, with a 20 March deadline for Warsaw to justify its actions.