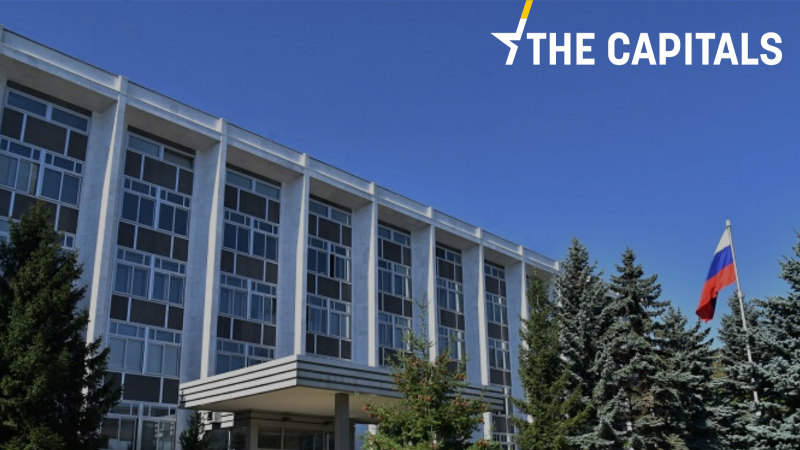 Before you start reading today’s edition of the Capitals, feel free to have a look at our Special Report on how Interreg EU project tackles climate change in the ‘Mediterranean way’. Also have a look at German companies suffer Brexit extension angst, as well as EU-mediated Russia-Ukraine gas talks in deadlock.

SOFIA. A Russian citizen, working as a First Secretary at the Russian Embassy in Sofia, has been collecting information classified as state secrets since September 2018 with the purpose of revealing it to a foreign country, the prosecutor’s office has announced.

“It has been established that, since September 2018, a citizen of the Russian Federation has carried out intelligence-gathering activities by making regular conspiring meetings with Bulgarian citizens, including with a high-level civil servant who had access to classified information about Bulgaria, the EU and NATO,” the prosecutor’s office said in a statement.

According to the Vienna Convention on Diplomatic Relations, “the diplomatic agent shall be immune from the criminal jurisdiction of the receiving State.” That is why, although there are reasons to bring a case against the diplomat on the grounds of espionage, he is protected due to his immunity.

Bulgaria, unlike 14 other EU members states, has not expelled Russian diplomats in reaction to the poisoning of Sergei and Yulia Sktipal in Salisbury, England. According to open sources, two Russian nationals linked to the Russian military intelligence used a Novichok nerve agent. But only last month, Nikolai Malinov, a businessman who heads a pro-Russian NGO, was charged in Sofia with spying and laundering money for Russian organisations.

Bulgarian prosecutors also banned a veteran Russian foreign intelligence official, Leonid Reshetnikov, from entering Bulgaria for ten years. Reshetnikov is the Lieutenant-General of the Russian Foreign Intelligence Service and the former head of the Russian Institute for Strategic Studies.

EURACTIV.bg’s Krassen Nikolov commented: “Sofia’s move is rather surprising at first sight and particularly at a time when huge Russian-based energy projects such as Turkish Stream and Belene nuclear power plant are being launched.” But he also pointed out that the developments occurred after Bulgaria’s chief prosecutor Sotir Tsatsarov and his expected successor Ivan Geshev visited the US.

In July 2018, Greece also decided to expel two Russian diplomats and ban entry to two others on suspicion that they tried to undermine an accord clinched between Greece and neighbouring North Macedonia. Moscow said the US was behind the move and expelled two Greek diplomats in response.

Asked about the case, a European Commission spokesperson initially had told EURACTIV.com that it was a “bilateral issue” and that the EU executive would not intervene. Asked by EURACTIV how the EU’s executive is able to keep its distance in a case where an EU member state receives threats from a third country, the EU official replied that Russian meddling in Greek domestic affairs was “unacceptable”.

Invest in data infrastructure. Europe is in danger of being left behind if it does not invest in its own data infrastructure, Germany’s Economics Minister Peter Altmaier (CDU) said on Monday (28 October) at the two-day digital summit organised by the German government in Dortmund.

“Digital platforms are turning the global economy upside down,” he said, adding that Germany and Europe should “not only be observers”. The German digital association Bitkom also warned against Germany playing an outsider role when it comes to digitisation. Several hundred representatives from politics, business, science and society will take part in the government’s Digital Summit in Dortmund to discuss the digital transition.

5G in Poland. The government and companies from the telecommunications industry have signed an agreement to develop a new company, Polskie 5G, with an aim to build fifth-generation network infrastructure in Poland.

Borys said: “The goal of the joint venture is to ensure nationwide availability of 5G services in selected bands, technology security and low service prices thanks to synergies of common infrastructure”. PFR is to provide “consultancy with possible participation in project financing”.

Polish operators mostly use Huawei equipment for LTE networks, but this may change with 5G. At the beginning of September, PM Mateusz Morawiecki signed a declaration on telecommunications security in the context of 5G development with US Vice President Mike Pence. It means that Huawei’s participation in the construction of the 5th generation network in Poland may soon be blocked. At the same time, Ericsson extended its production capacities in Poland, and it happens that the Swedish company is supported by the US.

Sánchez made the presentation during a pre-campaign PSOE rally in Madrid, just four days ahead of the campaign’s official launch set for 1 November. A Fresh election will be held in Spain on 10 November, with the PSOE, winner of the 28 April election, leading in El Mundo’s latest poll.

Meanwhile, Spain’s acting vice-president, Carmen Calvo, had criticised the opposition parties on Monday because, according to her, “they have never helped” PSOE to ease tensions with regard to the Catalonia crisis.

Breton’s mystery deepens. Thierry Breton, the new French candidate for the European Commission, met with Ursula von der Leyen in Brussels on Monday (28 October). EURACTIV France reported that strangely enough, by the end of the day, an undisclosed source promised that he would sell all the shares he owns, in case he is confirmed as Commissioner.

Before becoming a CEO of Atos, the former French Minister of Economy promised not to negotiate a “golden parachute” (parachute doré) after a series of scandals in France involving overpaid bosses. It appears that he has instead gained approximately 508,000 company shares by the end of 2018. This means that if he sells them now, he will obtain more than €34 million in cash, making him the richest Commissioner in Ursula von der Leyen’s team. Moving to rainy Brussels to assist multilingual meetings at the end of one’s career might sound like science-fiction to many Europeans.

EURACTIV France ironically commented that because the French candidate has already written SciFi novels, he might be looking for inspiration in Europe’s so-called ‘spies’ hub’ before he retires. (EURACTIV.fr)

Failed test. Matteo Salvini’s Lega and centre-right coalition gained a landslide victory in Umbria’s regional election on Sunday (27 October), striking a blow to the government’s coalition. Despite the modest dimensions of the central Italian region, the vote was a crucial test for Italy’s ruling parties Five Star Movement (M5S) and Democratic Party (PD) which run together in an election for the first time. For Five Star leader Luigi Di Maio, the ‘experiment’ of an alliance with the centre-left did not work. Salvini hailed this as a ‘historic victory’, highlighting that the leftists lost control of the ‘red’ Umbria after half a century. (Gerardo Fortuna | EURACTIV.com)

Balkans meet in Athens: In the aftermath of the EU decision to freeze Western Balkans accession talks, PM Kyriakos Mitsotakis will meet with his counterparts from Albania, Croatia and Serbia on Tuesday (29 October). The leaders will attend the 4th EU-Arab World Summit, which takes place in Athens. Accession talks will certainly be on the agenda during the meeting with Albanian PM Edi Rama, particularly as Athens wants to highlight the problems faced by the Greek minority in Albania.

Pay upfront to save later. The European Stability Mechanism (ESM) approved on Monday (28 October) an early partial repayment of Greece’s outstanding loans to the International Monetary Fund (IMF), while waiving Greece’s obligation to simultaneously repay the same proportion of outstanding loans from the ESM and European Financial Stability Facility (EFSF). “Greece’s early partial repayment to the IMF will be beneficial for both Greece and the ESM. It will generate savings as Greece can now finance itself on the market at a lower cost compared to the cost of servicing the tranche to be repaid to the IMF. This will improve Greece’s debt sustainability and should be positively perceived by financial markets”, said ESM managing director and EFSF CEO, Klaus Regling. (Theodore Karaoulanis | EURACTIV.gr)

101th anniversary. On Monday (28 October), Czechs celebrated the 101st anniversary of the establishment of Czechoslovakia as an independent and democratic republic after the end of World War I and the collapse of the Austro-Hungarian empire.

In line with tradition, Czech President Miloš Zeman appointed the new army and police generals. For the fourth time in a row, Zeman rejected to appoint as chief of counter-intelligence service (BIS) Michal Koudelka, who recently announced his team’s great success in uncovering a Russian spy network. Zeman, who is well known for his warm approach towards Russia and China, is very critical towards the work of BIS. In a recent interview for Barrandov TV, he said that Koudelka should focus on real economic crime rather than “fictitious hunt for Russian spies”.

Same history, different remembrance. While in Czechia this date is a national holiday, in Slovakia it is only a “day of remembrance” and thus a typical working day. Slovak president Zuzana Čaputová said that “it is worthy of reflection and it’s a legitimate reflection on whether 28 October should be made a national holiday in Slovakia. “Without this day, we probably would not be an independent state, which makes it one of the most important days to remember and be recalled, maybe also in this way.” (Aneta Zachová | EURACTIV.cz, Zuzana Gabrižová | EURACTIV.sk)

Controversial nomination. The ruling FIDESZ party nominated Tünde Handó, the current President of the National Judicial Office (NJO), responsible for the administration of the judicial system, to become a member of the Hungarian Constitutional Court. Handó has been at the centre of domestic and international criticism regarding the 2011-2012 judicial, administrative reforms, which centralised Hungary’s judicial administration and vested the NJO President with key powers, including the appointment of court executives and the training of judges.

The European Association of Judges in a report after a fact-finding mission to Hungary in April 2019 concluded: “The Hungarian Judiciary has been facing a kind of constitutional crisis since May 2018 due to the activity of the NOJ Presiden.” As a member of the Constitutional Court, Handó will participate in the interpretation of the Fundamental Law. (Vlagyiszlav Makszimov, EURACTIV.com)

No new government this week. The parliament will not give its final vote on the new government this week as the prime minister-designate wanted. The hearings of the ministers will take place on Tuesday and Wednesday in the committees, but the approval vote will only be held next Monday. Ludovic Orban, the PM-designate, said he is counting on 234 votes, more than the minimum requirement of 233. (EURACTIV.ro)

Crucial endorsements. Dragan Čović, leader of HDZ Bosnia and Herzegovina, a sister party of Croatian ruling HDZ, has endorsed Kolinda Grabar-Kitarović for a new term as president of Croatia. “We hope that Croatia will use its EU presidency next year for improving the path of Bosnia and Herzegovina towards EU membership,’” said Čović adding that his party will officially join the Grabar-Kitaorivić’s campaign very soon. BiH citizens who obtain the Croatian passport frequently vote on presidential elections, and this endorsement is increasing the chances for Grabar-Kitarović’s re-election.

At the same time, the Croatian Peasant’s Party, which used to be EPP affiliated, has officially endorsed S&D candidate Zoran Milanović. According to EURACTIV Croatia, this confirms that the right-wing party is moving towards the left. (Tea Trubić Macan| EURACTIV.hr)

Not only up to Serbia. Serbian FM Ivica Dačić has said the EU accession is Serbia’s foreign policy priority, but the pace and dynamism of the process depend on many factors. He also said that protection of the state and national interest, in addition to EU accession, are also a priority. He said that Serbia would work hard in order not to let those two things become mutually exclusive. “I think that it is bad for Europe, too, to put us in a situation where we are forced to choose between those interests,” Dačić said.