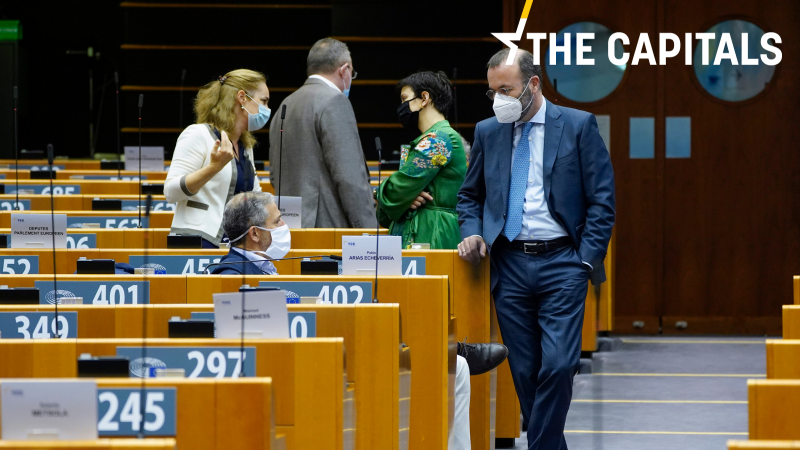 Before you start reading today’s edition of the Capitals, feel free to have a look at the article  Debate over building confidence in COVID-19 vaccine heats up written by Sarantis Michalopoulos.

Heavy defeat over Bulgaria’s rule of law. The European People’s Party (EPP), the largest force in the European Parliament, suffered a heavy defeat on Thursday (8 October) over a resolution condemning the democratic backsliding and corruption under the rule of Bulgarian Prime Minister Boyko Borissov, and supporting the protests demanding his resignation. Read more.

Massive increase in coronavirus cases. On Thursday (8 October), Germany clocked more than 4,000 new COVID-19 cases in the span of 24 hours. This is the largest single daily increase since early April. German Chancellor Angela Merkel (CDU) again appealed for adherence to the country’s coronavirus rules. Today (9 October), she will meet with mayors of some of Germany’s largest cities that have been the sites of some of the highest rates of new infections. (Sarah Lawton | EURACTIV.de)

Majority of French MPs vote for extending abortion time limits. With 102 votes “in favour” and 65 “against”, French MPs voted in favour of extending the legal time limit for resorting to abortion. On Thursday (8 October), the bill on the reinforcement of the right to abortion, which plans to extend the legal period for an abortion from 12 to 14 weeks, was debated in the national assembly. Read more.

New lockdown, but what scope? A new lockdown could be coming up if COVID-19 infection numbers don’t start to decrease within ten to twelve days, top virologist Marc Van Ranst warned on Thursday (8 October). Read more.

LUXEMBOURG
5G arrives in the capital city next week. Luxembourg telecom giant POST will launch its ultra-fast 5G network in Luxembourg. POST, Orange, Proximus and Luxembourg Online successfully bid in a government auction in July for the rights to use slices of the radio spectrum to provide its 5G offerings. POST aims to provide 90% of Luxembourg with 5G network coverage by 2024. The technology should be rolled out in the rest of the country next year. (Anne Damiani | EURACTIV.com)

No EU ID cards any more. EU nationals will not be able to travel to the UK using their identity cards from October 2021 under new measures announced by the UK government on Thursday (8 October).

As part of the UK’s new Border Operating Model, passports will be required for entry into the UK from October 2021. The new rules will apply to tourists and other visitors to the UK but not to EU nationals living in the UK if they have applied to the EU Settlement Scheme to remain in the country. (Benjamin Fox, EURACTIV.com)

“Sweden has left the low levels we saw during the summer,” Lena Hallengren, Minister for Health and Social Affairs, told a news conference. “Our assessment is that changes are not appropriate at this point.”

Conte also stressed the importance of cooperation with regional administrations. “One of our strengths in addressing the pandemic situation has been the coordination of the actions between central and local governments”, he said, adding that “regional administrations have confirmed their intention to say  keep working together.”

In other news, Italy has not respected most of the 2020 objectives of the 2030 Agenda on sustainability, according to a report published on Thursday (8 October) by the Italian Alliance for Sustainable Development (ASviS) on the matter. The report says that out of the 21 objectives for 2020, 12 of them are way far from the reference values, delineating a “deeply unsatisfying situation”.

It also emerged that the impact of the pandemic has negatively influenced 9 of the 17 goals, which include poverty, hunger, health, education, gender equality, occupation, innovation, inequality and partnership all worsened, while the circular economy, air pollution and crime improved. (Alessandro Follis | EURACTIV.it)

Madrid court strikes down government’s COVID-19 restrictions. The regional high court in Madrid on Thursday (8 October) struck down government restrictions that sealed off the Spanish capital and nine of its satellite cities in a bid to curb soaring COVID-19 infection rates, saying the move lacked legal underpinning and breached residents’ “fundamental rights.” Read the full story.

Portugal a key driver in Africa. Portugal’s EU presidency in the first half of 2021 will be a key driver of relations with Africa, and could culminate in a summit, President Rebelo de Sousa said on Thursday. (Inês Escobar Lima, Lusa.pt)

In other, news, Portugal registered the second-ever highest number of new COVID-19 infections. The Portuguese government said it was more than ready to review the measures necessary to monitor the spread of the virus and that the decision on the rules to be applied in the following fortnight will be decided next week. (Gabriela Chagas and Joana Felizes, Lusa.pt )

Golden Dawn trial reconvenes on Friday. The Appeals Court deciding on the sentences of far-right Golden Dawn former MPs and other members was adjourned until Friday morning when judges will hear defence lawyers on their clients’ extenuating circumstances, Athens News Agency reports.

Poland may announce state of emergency. Prime Minister Mateusz Morawiecki announced on Thursday (8 October) that due to a rapid increase in infections –  including in yellow zones – there will be a new series of restrictions for the whole country as of Saturday (10 October). Read more.

Scientists against giant canal. Dozens of Czech scientists have signed a petition criticising the government’s decision to approve the construction of a canal connecting the Danube-Oder-Elbe rivers. Read more.

TikTok investigation. Hungary’s competition authority launched an investigation into TikTok on the suspicion that the platform did not provide consumers with relevant information “such as the scope and use of data processed” when using the application, as would be required by “principles good faith and fairness”, 444.hu reported.

The authorities also raised an issue with the fact that TikTok did not make available its terms of use in Hungarian and did not act with the “expected professional diligence” to “moderate” children’s exposure to advertisements when using the app.

In other news, the FinCEN (Financial Crimes Enforcement Network) Files have revealed 63 suspicious transactions from four Hungarian banks. The 63 transactions from four banks are linked to Tanzania, Cyprus, Russia, India, Monaco and the US. Earlier this year, the Central Bank of Hungary also had to impose fines on six banks for deficiencies in their anti-money laundering policy. (Vlagyiszlav Makszimov | EURACTIV.com)

Apart from the coronavirus situation, the session is also due to discuss illegal migration with the presidents of Slovenia and Austria, Borut Pahor and Alexander Van der Bellen, who called for the protection of minorities as an element that enriches ahead of the 100th anniversary of the Carinthian plebiscite, which determined the border between Austria and modern-day Slovenia.

Carinthian Slovenians and the Government Office for Slovenians Abroad lauded on Thursday Austria’s decision to double the funds for minorities in the country. The office regrets though that Article 7 of the Austrian State Treaty, setting down rights of the Slovenian minority in southern Austria, has not yet been implemented. (Željko Trkanjec | EURACTIV.hr)

Romania to sign nuclear deal with US. The Romanian and US governments will sign an agreement for a project of $8 billion on the nuclear power plant in Cernavoda. The project could be financed by an American bank, a US diplomat said on Thursday (8 October). Read more.

In other news, Romania recorded more than 3,000 coronavirus infections in 24 hours for the first time since the debut of the pandemic. On Thursday (8 October), public health authorities announced that 3,130 infections were registered in the previous 24 hours, as a record 30,191 tests were performed.

In total, more than 145,000 people were infected with the new coronavirus, and around 5,250 people have died due to COVID-19. (Bogdan Neagu | EURACTIV.ro)

Investment only with reforms. The new economic and investment plan of the EU for the Western Balkans would be worth nothing if it is not accompanied by quick reforms. Enlargement Commissioner Oliver Varhelyi said in Belgrade on Thursday (8 October). Read more.

In other news, the European Food Safety Authority (EFSA) has designated Serbia as a high-risk country for the appearance of African swine fever, agency representatives said on Thursday (8 October). Read more.

Condemnation of journalist’s sentence. The ​Media Freedom Rapid Response​ partners and media freedom organisations strongly condemn the decision by the High Court of Montenegro to sentence investigative journalist Jovo Martinović​ to one year in prison for participating in drug trafficking. Read more.

No package of laws on economic recovery. Kosovo’s parliament failed for the sixth time in a row to pass a package of laws aimed at helping the country’s economy recovery after it was hit hard by COVID-19 pandemic. Only 59 MPs out of 120-seated parliament voted in favour of passing the legislation. The opposition MPs of the Vetevendosje and Democratic Party of Kosovo (PDK) boycotted the vote. (Željko Trkanjec | EURACTIV.hr)