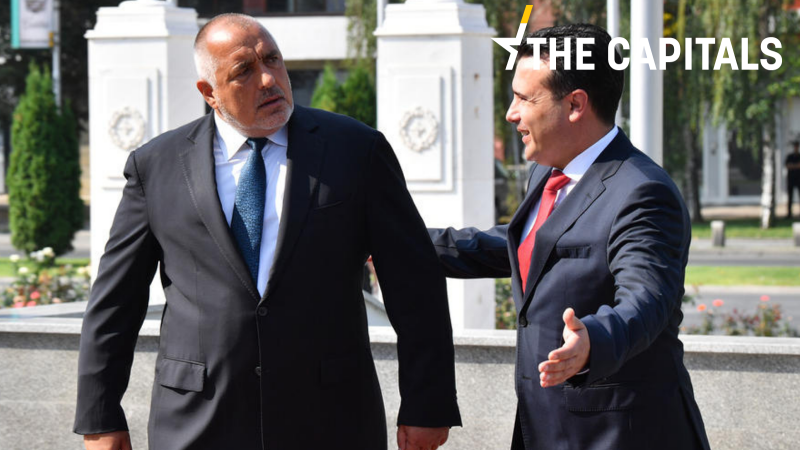 Before you start reading today’s edition of the Capitals, feel free to have a look at the article  EU seals accord to let third countries into future joint military projects, written by Alexandra Brzozowski.

A so-called “framework for negotiations” is on the agenda of a General Affairs Council scheduled for 10 November. Read more.

Same minimum wage for all EU countries ‘impossible’. Commissioner Nicolas Schmit said on Wednesday (28 October) that if Bulgaria, the country with the lowest wages in the EU, were to introduce the same wages as his native Luxembourg, the very next day there would be “no Bulgarian economy”. Read the full story here.

Germany, France to go into lockdown. French President Emmanuel Macron and German Chancellor Angela Merkel ordered their countries back into lockdown on Wednesday, as a massive second wave of coronavirus infections threatens to overwhelm Europe before the winter. Read more.

Regional coordination on COVID-19 measures. After consultation between Prime Minister Alexander De Croo (Open VLD) and the prime ministers of the various regions, the new COVID-19 measures announced in Flanders, Wallonia and Brussels in recent days were decided in a coordinated approach, something that has been rather difficult in the previous first wave. Read more.

New nationwide measures in preparation. Austria’s national system of evaluating regional COVID-19 situations indicated that most or the entire country could turn “red” by Thursday, following a meeting at which Chancellor Sebastian Kurz and ministers are set to discuss next steps.

The Austrian government is considering new nationwide measures, and prioritizing the support of intensive care units (ICU) in hospitals which are now close to full capacity, according to official sources quoted by Austrian daily newspaper Der Standard. (Philipp Grüll | EURACTIV.de)

More electric cars on demand. Road traffic emissions in Finland should be halved compared to 2005 levels for which the number of electric cars is to be significantly increased, according to a report published on Tuesday by a working group commissioned by the country’s transport and communications ministry. Read more.

Data seepage embarrasses Swedish security company. The hacking of Gothenburg-based company Gunnebo – a provider of security products, services and software – has resulted in a massive leak of more than 38,000 secret files. The severity and significance of the data breach is only now starting to emerge, according to Dagens Nyheter. Read more.

UK has more to lose from no deal Brexit, say voters. Two in five UK adults say that the UK has more to lose than the EU if Brexit negotiations fail, compared to just a quarter who think the EU stands to lose more, according to a poll published on Wednesday. Read our full story here.

Conte says new restrictions necessary. The restrictions introduced by the latest decree are necessary to prevent the pandemic situation from getting out of hand, said Italian Prime Minister Giuseppe Conte on Wednesday. Read more.

Sánchez agrees to parliament check during new state of alarm. Prime Minister Pedro Sánchez agreed on Wednesday to appear before the Spanish parliament every two months to explain his government’s decisions to curb the second wave in exchange for a favourable vote on the six-month-long state of alarm he proposed last week, EFE reported. Read more.

Greece to follow France’s lockdown model. If the COVID-19 cases continue to exceed 1,500 daily by next Sunday, then the Greek government will most probably adopt a France-style quarantine, according to government sources. Read more.

Protests continue after top court abortion ruling. Thousands of people protested across the country on Wednesday afternoon, most of whom gathered in the cities of Warsaw, Łódź, Cracow and Wrocław. Wednesday marked a week of protests following the Constitutional Tribunal’s ruling last Thursday (22 October) that rendered existing laws that allow abortions due to foetal defects unconstitutional. Read more.

Minister who breached his own rules receives highest award. Former Czech Health Minister Roman Prymula was awarded the Order of the White Lion, the county’s highest award, for his efforts in fighting the COVID-19 pandemic.

Prymula was sacked by Prime Minister Andrej Babiš after photos of him attending a restaurant that should have been closed under his own COVID-19 measures was published by Czech media. The award ceremony did not take place due to COVID-19 restrictions, but the names of the awardees were released on Wednesday. (Aneta Zachová | EURACTIV.cz)

Police investigates corruption allegations in the judiciary. The Slovak police has detained influential businessman Zoroslav Kollár, as well as eight judges or former judges – including the Supreme Court’s former vice-president and another Supreme Court judge – on Wednesday, as part of Operation Víchrica (Gale).

This is part of larger efforts by the country’s Criminal Agency to prosecute persons linked to alleged massive judicial corruption. (Zuzana Gabrižová | EURACTIV.sk)

Statutory maximum of COVID tests results in lower capacity. The National Centre for Public Health (NNK) confirmed that the maximum number of PCR tests per day is 10,000-12,000, Napi.hu reported. NNK could increase this number by using the free capacity of private labs but most have stopped testing after the government set a statutory price ceiling of €53 (HUF 19,500).

Meanwhile, the share of positive COVID tests since the start of September has increased from 3.2% to 16%, well above the 5% threshold advised by the World Health Organisation (WHO). (Valgyiszlav Makszimov, EURACTIV.com)

Media under pressure. Croatian and Slovenian media organisations have been raising alarm over their respective authorities ‘using the coronavirus to attack the press’. Read more.

We don’t want a lockdown. The epidemic situation in Romania does not require a lockdown, President Klaus Iohannis said Wednesday, the day that Romania announced new negative records. “One cannot introduce new restrictions every day, we need to see what are the effects of those already implemented, to wait at least two weeks to see the results,” Iohannis said.

He added the epidemic had generally been well managed in Romania and authorities do not want to impose more severe measures as quarantines or lockdowns. On Wednesday, Romania reported 5,343 infections with the coronavirus in the previous 24 hours, while the daily death toll reached 107. (Bogdan Neagu, EURACTIV.ro)

Chinese respirators don’t work. In April this year, the government of the BiH federation, decided to buy a hundred respirators worth €5.3 million manufactured by the company Srebrena malina (silver raspberry), which registered for the cultivation and processing of fruits and vegetables. The respirators will be distributed to hospitals for the treatment of patients with the most severe COVID-19 cases. Read more.

The respirators were authorised for use and two were sent to a hospital in the eastern city of  Goražde. However, while medical experts could not get one machine to work, the other respirator turned out to be useless as the values it outputs are 80% different from those set. (Željko Trkanjec | EURACTIV.hr)

US urges Montenegro ‘to be careful’ when choosing ministers. “The US expects people who will make sure Montenegro fulfils the obligations arising from NATO membership to be in the key ministries in the new Montenegrin government,” US Deputy Assistant Secretary of State and Special Representative for the Western Balkans, Matthew Palmer, told said.

“It is not my job to select or identify individuals for specific responsibilities. But I want to emphasise that it is important to have people in key ministries who are ready not only to be partners of the United States but also of European allies in advocating for a positive and European future and to ensure Montenegro fulfills its obligations as a NATO member,” he told Voice of America in an interview. (Željko Trkanjec | EURACTIV.hr)