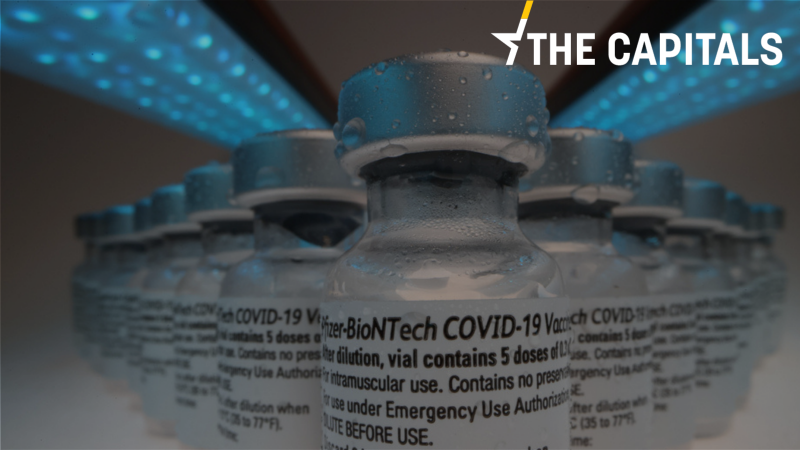 Borissov boosted how European solidarity and his diplomatic efforts had provided an additional 2.7 million doses of the Pfizer vaccine to be delivered to Bulgaria in the next two months. [Shutterstock/cortex-film]

Before you start reading today’s edition of the Capitals, feel free to have a look at the article “AstraZeneca says it had positive meeting with EU over vaccine row“.

Bulgarian PM reveals price of Pfizer vaccine has jumped from €12 to €19.50. The European Commission has signed contracts with Pfizer for the supply of COVID-19 vaccines in 2022 and 2023 for €19.50 per dose, Bulgarian Prime Minister Boyko Borissov revealed on Sunday. Read more.

Vaccination in France is speeding up with the opening of vaccination to the over-55s. Health Minister Olivier Véran made several announcements on Sunday in the Journal du Dimanche. In addition to opening vaccination to all people over 55, he also announced the authorisation of self-tests.

“The self-tests will quickly be made available in schools. We plan to go up to two tests per week, per pupil and per teacher”, he said as France plans to reopen its schools after the current two-week holiday. The minister also indicated that he was expecting a first delivery of the Janssen (Johnson & Johnson) vaccine of “200,000 doses”, “a week ahead of schedule”. To date, nearly 11 million French people have received at least one dose of the vaccine. (Mathieu Pollet | EURACTIV.fr)

Germany’s far-right AfD firms up election strategy with EU exit and anti-lockdown campaign. Germany’s far-right AfD party vowed to campaign for an end to COVID-19 restrictions, a tougher line on migration and an exit from the EU as it finalised its manifesto for the September elections over the weekend. Read more.

Söder and Laschet ready to run for chancellor. Both CDU party leader Armin Laschet and CSU chairman Markus Söder have declared their willingness to vie for the Union’s candidacy for German chancellor. The leaders of both the CDU and CSU will be discussing the situation in separate meetings on Monday. (Alexandra Brzozowski, EURACTIV.com)

Belgium’s travel ban unlikely to be extended beyond 18 April. The country’s ban on non-essential travel is unlikely to be extended when the Consultative Committee next meets on Wednesday, health minister Frank Vandenbroucke told VTM Niews. However, there will be restrictions remaining, including tighter controls on returning travellers and sanctions for anyone returning from a red zone and refusing to be tested. (Alexandra Brzozowski, EURACTIV.com)

Chancellor’s party loses poll supremacy. The current headlines about corruption within the ÖVP keep on damaging the party’s standing. In a recent survey, only 33% of citizens said they would vote for the conservatives headed by Chancellor Sebastian Kurz. Last year around this time, the party’s approval ratings stood at 48%. Kurz himself is at his lowest approval rate during his time as chancellor: 27%.

The slump in popularity is being seen as due to recently revelations about alleged nepotism among leading ÖVP figures, including the chancellor himself, when it comes to distributing well-paid government jobs. The country’s slow vaccine roll-out could play a part. (Philipp Grüll | EURACTIV.de)

Turkey suspends Italian contracts in wake of Draghi’s Erdogan comments.  The Turkish government has suspended contracts from Italian companies based in Turkey in response to the comments made by Italian Prime Minister Mario Draghi at a press conference Friday regarding the so-called ‘sofa-gate’ affair, calling Turkish President Recep Tayyip Erdogan “a dictator”. More

Spanish PM under pressure to lay out next steps in tackling pandemic. COVID-19 pandemic amid fierce criticism from the conservative opposition about the slow vaccination roll-out and controversy surrounding the AstraZeneca vaccine, EURACTIV’s partner EFE reports. Read the full story.

OLAF chief: 1.1 billion fake doses currently in the market. Fake offers of 1.1 billion doses of COVID-19 vaccines from supposed intermediaries to EU governments are currently in the market, said Ville Itälä, Director General of the European Anti-Fraud Office (OLAF). In an interview with Greek journal Ta Nea, Itälä said the value of these fake offers stands at €15 billion. More.

Czech foreign ministry bans Orbán-critical directors’ message. Czech directors Ondřej Provazník and Martin Dušek filmed a short video message to be shown before the screening of their movie Old-Timers on Thursday (April 15) at the Czech Film Carnival in Budapest, writes Parameter.sk via Respekt.cz. One of the directors wrote “Ban Orbán” on a board while the other said “our political representatives also need to be aware that maybe someone will come at the end of their lives to hold them accountable for their actions”. More

Czech foreign minister to be fired from the government. Deputy prime minister and freshly re-elected leader of the Czech Social Democrats, Jan Hamáček is expected to propose the removal of Czech Foreign Minister Tomáš Petříček (S&D) from the government. The change in the ruling cabinet is expected to happen Monday. Hamáček’s decision comes one day after he was re-elected party leader after running against Petříček at a party congress that took place on Friday and Saturday.

The former health minister, Jan Blatný, was replaced on Wednesday by Petr Arenberger. Both Petříček and Blatný were criticised by Czech President Miloš Zeman for their negative approach to the Russian Sputnik V vaccine.

European Broadcasting Union (EBU) on Friday warned of increasing political pressure on the public broadcaster Czech Television. As EURACTIV.cz reported, changes in the broadcaster’s supervisory commission have already caught the attention of Czech European Commissioner for transparency and values, Věra Jourová, who admitted being “worried about the Czech Television.” The International Press Institute has also expressed serious concerns regarding the broadcaster’s future. Read more.

Local Slovenian politician’s house attacked with petrol bomb. A fire broke out on Friday evening in the house of Vesna Fabjan, a local councillor for the opposition party Marjan Šarec List (LMŠ), in Črnomelj, after an unknown perpetrator threw a petrol bomb through the window. No one was hurt and family members managed to put out the fire. Read more.