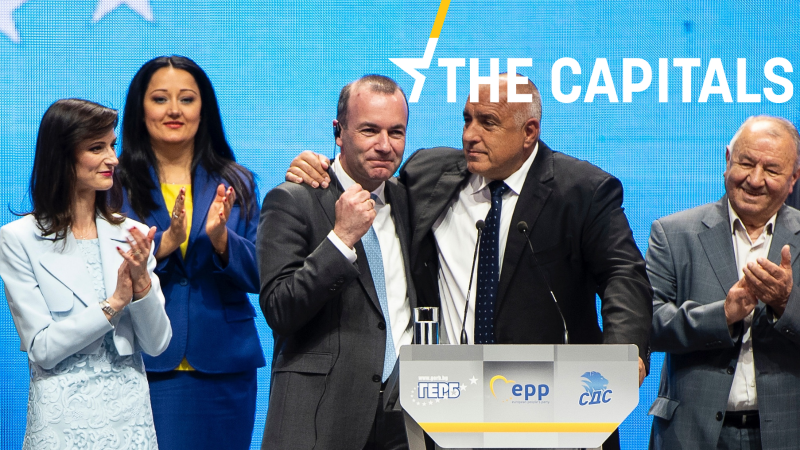 The Capitals is EURACTIV's daily newsletter from across Europe. [EPA/VASSIL DONEV]

In BRATISLAVA entry, corrects name of country to Slovakia

>>Read The Capitals in French.

After a series of scandals that have eroded the support for his GERB party, Bulgarian PM Boyko Borissov was on Monday (20 May) personally accused of wrongdoing in cases related to real estate and undeclared property.

This happened just one day after Borissov rolled out the red carpet in Sofia for Manfred Weber, the Spitzenkandidat of GERB’s European political family, the EPP.

Elena Yoncheva, a journalist leading the EU elections list of BSP, the Bulgarian Socialist Party, published revelations that claim Borissov, while mayor of Sofia, facilitated a land swap deal in favour of his cousin Radoslav Ivanov. She also accused the PM of owning a luxury house in Barcelona that he has not declared.

Borissov was quick to deny the accusations. In a surreal TV appearance, together with EU Commissioner Mariya Gabriel, he claimed to be on very bad terms with his cousins, and to have even beaten two of them “because of a [a conflict over a] pump”.

Regarding the Barcelona house, he said it was the property of Aleksandar “Sasho” Chaushev, a pharmaceutical boss, not his.

Yoncheva doubled down though, with information she published on Facebook, including scanned documents, which seemingly indicate that Radoslav Ivanov has become the owner of Borissov’s former business, including ‘Ipon’, the bodyguard company founded by him. She also published photos contradicting the claim that Borissov and his cousin were not close.

Moreover, she stated on the BSP website that she insists the prosecutor general investigate the house in Barcelona.

The GERB party has suffered from a series of scandals related to property: first the “apartment scandal”, then the “guesthouses scam”, which involves EU money. GERB and BSP are neck and neck ahead of the European elections and Borissov has said he will not resign if GERB loses. (Georgi Gotev, EURACTIV.com)

Macron with Tusk and Costa. French President Emmanuel Macron will meet with Donald Tusk and the rest of the EU Council two days after the EU vote. Portuguese counterpart Antonio Costa supports the idea of a coalition between the centrists, Socialists and Greens, rather than the socialists and EPP.

Generations angry at ex-friends. The Generation-s movement, which was created by Benoît Hamon and is now former Greek finance boss Yanis Varoufakis’s ally in France, just discovered that the Socialists may discuss the possibility of post-EU election collaboration with the Greens and the centrists. It is something S&D leader Udo Bullmann has been pushing forward for a long time.

They are upset about this and say the double language “harms politics”, considering that the Socialists are against Macron in France but with him in Europe. Not totally untrue considering Place publique and socialists in France argue they do now want any alliance with Macron’s team in the EU parliament. (EURACTIV.fr)

Brexit party funding. Nigel Farage’s Brexit Party is under inspection by the Electoral Commission, after concerns over its funding mechanism. Former PM Gordon Brown said yesterday that Farage’s outfit was a “private company” and not a “political party,” due to the manner in which it has accepted the majority of its donations, which largely go unvetted.

Resignation. All ministers of the far-right Freedom Party of Austria (FPÖ) party stepped down on Monday after Austrian Chancellor Sebastian Kurz (EPP) forced out Interior Minister Herbert Kickl (FPÖ), as a result of the now infamous ‘Ibiza video’.

Kurz plans to replace the FPÖ ministers of defence, labor and transport with experts and high-level civil servants, until new elections in September. (Claire Stam, EURACTIV.de)

Warning. In several interviews on Monday, leaders from the Conservatives of the CDU and its Bavarian sister party CSU warned against any cooperation with right-wing populists following the scandal in Austria. (Claire Stam, EURACTIV.de)

A greater role in the EP. The leading EU elections candidate of the centrist Ciudadanos (Citizens/ALDE), Luis Garicano, has said Spain can regain a leading role in the EU if parties put paid to the notion of “going to Brussels to retire”. In an interview with EURACTIV’s partner EFE, Garicano blamed the socialists PSOE, who lead the polls, and the conservative Partido Popular (PP) for having used Europe as “political graveyard to park politicians”. (EuroEFE.EURACTIV.es)

Unclear picture before EU vote. Just a week before the EU elections, it is still unclear in Poland which party is in the lead. A week ago, a poll conducted by Kantar suggested that the ruling right-wing Law and Justice (PiS/ECR) leads with 43% followed by the European Coalition (28%) and the newly established progressive Wiosna party (8%). But a few days later, things changed: the European Coalition now leads with 36%, followed by PiS 35%, while Wiosna sits on 10% and the nationalist far-right KONFEDERACJA get 8%.

Another poll commissioned by Newsweek Poland found that the European Coalition gets 43% of the vote while PiS comes second with 33%, Wiosna stands at 9% and KONFEDERACJA at almost 7%. (EURACTIV.pl)

End of a candidacy that never was. Igor Matovič, leader of Slovakia’s opposition OĽaNO party, announced he is stepping down from the top of its own candidate list for the EU elections. His move is peculiar since he had not planned to take a seat in the EP anyway and was only standing in order to refresh his current mandate in the national parliament. He explained that faced with the possibility of the neo-fascist LSNS party winning the election, he decided not to make the election “a poll about himself”. (Zuzana Gabrižová, EURACTIV.sk)

Leaders debate. Leading candidates of the nine parliamentary parties met in a pre-election debate organised by the Association for International Affairs, Aktuálně.cz and EURACTIV.cz. Despite the controversial rhetoric of ANO chief and PM Andrej Babiš, ANO MEP Dita Charanzová said her party wanted to remain in ALDE or join another liberal platform established on ALDE’s foundations.

According to the diplomat, ANO and ALDE agree on the most important issues such as the protection of the Schengen area and the free market. There are two other groupings that aspire to join the liberals – the HLAS movement established by EP vice-president Pavel Telička and the Czech Pirates Party, who might embrace the Greens instead

Babiš often criticises the EU. In an interview for EURACTIV’s partner Hospodářské noviny, he said he had to protect the Czech Republic against the “EU’s nonsense” but he also rejects a coalition with Hungarian PM Viktor Orbán. (Aneta Zachová, EURACTIV.cz)

Grain exports top €2.2 billion. Romania’s grain exports went above 12 million tonnes last year, compared with some 11 million tonnes in 2017, according to agriculture ministry data. The value of the exports rose 10% in the year to more than €2.2 billion. Romania was the third largest grain producer in the EU, after France and Germany, with a production of almost 31.2 million tonnes. Romania was the largest EU producer of maize and sunflower, and the fourth largest producer of wheat.

No sentence yet for Dragnea. Judges again postponed a verdict on the leader of the ruling socialist party PSD, Liviu Dragnea, who got a three-and-a-half-year-long jail sentence for abuse of office in a first instance. Romania’s High Court will announce its decision on 27 May, a day after the EU elections. In a separate case, the Constitutional Court postponed until 5 June a ruling on a judicial conflict between the parliament and the High Court that could erase Dragnea’s sentence in the first instance. (EURACTIV.ro)

More reforms.“We have to [make] more reforms — and reforms are like a bicycle: if you don’t [make] them you fall down,” PM Alexis Tsipras said in an interview with the FT. He also said when he expressed his will for a possible agreement with North Macedonia on the now finalised name dispute, German Chancellor Angela Merkel didn’t believe him. (Theodore Karaoulanis, EURACTIV.gr)

Varoufakis. DIEM25 leader Yanis Varoufakis called on Croatian citizens to vote for the political platform Možemo! (We Can!), which is in coalition with the New Left and ORaH parties.

Socialists spent the most. The Social Democratic Party (S&D) has so far spent €300,000 on its EU election campaign, while the ruling HDZ (EPP) has splashed €200,000. The Amsterdam Coalition (ALDE) has spent around €180,000. (Željko Trkanjec, EURACTIV.hr)

Brammertz in Belgrade. Serge Brammertz, chief prosecutor for the Mechanism in The Hague, the legal successor of the Hague war crimes tribunal, will visit Belgrade in mid-June as part of preparations for the submission of a regular report to the UN Security Council. The discussion will focus on the implementation of the national strategy for processing war criminals, regional judicial cooperation in war crimes cases and the Hague prosecution’s support to the Serbian authorities in serving justice in those proceedings. (Beta-EURACTIV.rs)

One response to “Bulgaria’s Borissov causes EPP another scandal headache”