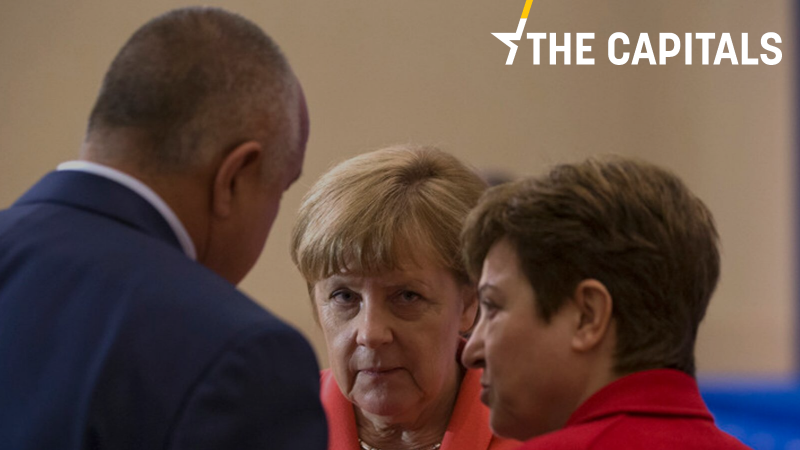 The Capitals brings you the latest news from across Europe. [EPA/ TOLGA BOZOGLU]

We’re in the money! Bulgarian PM Boyko Borissov has revealed his tactics over the top jobs negotiations, which will open the door to his compatriot Kristalina Georgieva becoming the next International Monetary Fund (IMF) chief. After other candidates withdrew, Georgieva is the sole candidate to be the fund’s next managing director, virtually guaranteeing that she will succeed Christine Lagarde in the job in early October.

Borissov was criticised by the opposition for having missed out on the EU’s foreign affairs chief portfolio for Georgieva at the June summit, when leaders nominated Ursula von der Leyen as Commission chief and picked Spain’s Josep Borrell to replace Mogherini.

The opposition insists that Mariya Gabriel’s portfolio (EU Commissioner for Innovation and Youth) is too modest compared to Bulgaria’s previous record (Georgieva was in charge of the EU budget).

Borissov said he kept silent at the summit, because his goal was to make sure that Georgieva gets the IMF gig, at a time when, in his words, she was facing competitors from the Netherlands, Germany and the UK.

At that time, Georgieva was in competition with Dutchman Jeroen Dijsselbloem, the UK’s George Osborne, Finland’s Olli Rehn and Spain’s Nadia Calvino.

Borissov revealed that his finance minister, Vladislav Goranov, had been in charge of the lobbying. He explained that Bulgaria won after “the US, Russia, China, the Arab countries and Africa” stood behind Bulgaria, and “only India was left”.

In his typical style, Borissov justified his tactics with money involved. “When we had to choose, the post of EU foreign affairs chief could be ours. But the difference with the IMF chief is one thousand billion dollars and the possibility of action in the whole world”, he said.

Various reports suggest that Georgieva got the top job because French President Emmanuel Macron went into bat for her. In the post World War II order, the IMF chief always comes from Europe, while the US gets to pick the head of the World Bank. (Georgi Gotev, EURACTIV.com)

Socialists lead latest poll. Since tough negotiations between the socialist party (PSOE) and the leftists of Unidas Podemos seem to have no agreement in sight, results of a survey published on Thursday show that the socialists would win if a new election were held, EURACTIV’s partner EFE reports.

According to the poll, the socialists would get 29.7%, followed by the conservative Partido Popular (PP) with 11.6%. The survey was carried out between 17 June and 16 July, before the failed investiture of acting socialist PM Pedro Sánchez.

Meanwhile, acting vice-president of the government, Carmen Calvo, on Thursday insisted there is still time to reach an agreement between the two parties but insisted Sánchez needs clear backing from Unidas Podemos before trying to form a government.

The PSOE has rejected forming a coalition with Unidas Podemos and is only offering a “programmatic agreement”, ahead of a 23 September deadline. (Fernando Heller /EuroEFE.EURACTIV.es)

Teacher strike? Just ahead of national elections, Polish schools might be hit by a wave of strikes as the Polish Teachers’ Union says it is coping with overloaded teaching plans, a shortage of key teachers in schools and bad infrastructure. Experts, however, expect that if trade unions decide to stop work in schools, they will mobilise conservative PiS voters even more, who are mostly against the strike. (Alexandra Brzozowski, EURACTIV.com)

CO2 reductions? In 2018, Poland increased the amount of its CO2 emissions by 7 mln tonnes. This stands in a sharp contrast to Germany which cut 37 mln tonnes compared to 2017. Also in per capita ranking, Poland fares badly, as in 2018, it emitted 188kg CO2 per head, which is more than China (144kg) or even India (121kg) (Łukasz Gadzała,EURACTIV.pl)

China angry at Germany. Foreign minister Heiko Maas (SPD) pushed back against Beijing’s criticism for meddling in its domestic affairs, following a meeting with Hong Kong’s democracy activist Joshua Wong in Berlin on Monday. Maas said on Thursday (12 September) that he would continue to meet with human rights lawyers and activists. Wong told newspaper Die Zeit: “I don’t believe that a brief conversation with the foreign minister is proof of interference.”

Backstop stays, says EP chief. There will be no Brexit deal without an Irish backstop, European Parliament President David Sassoli said on Thursday. However, the EU is willing to revive a proposal that would keep only Northern Ireland in the bloc’s orbit to maintain a seamless border to Ireland, and was open to giving the UK another extension, he said. Read more

Salvini who? The European Commission last night received a request to coordinate the sharing of migrants on board the Ocean Viking NGO rescue ship, a spokesman said on Thursday, ANSA reported.

He said a number of countries have already said they will take some of the migrants, once they have come off the ship operated by SOS Mediterranée and Doctors Without Borders. ANSA commented that the new 5-Star-Democratic Party government has signalled it may break with some of former interior minister and League leader Matteo Salvini’s tough anti-migrant policies.

Debt collector. The IMF agrees with Christine Lagarde’s statement in the European Parliament regarding the need to review the high primary surplus targets for Greece, a fund spokesperson said on Thursday. This view reflects the IMF’s standing position on this issue in recent years, he added.

Meanwhile, the conservative Greek government aims for an early repayment of the “expensive” part of the IMF loan (€2.9 billion at 5.13% interest rate) and this will benefit the country by €75 million per year. (EURACTIV’s partner Athens-Macedonian News Agency)

Oh those Russians… Should there be a conflict between the United States and Russia, 20% of Slovaks would like the country to stand with Russia, 6% would back the US and 2/3rds would opt for neutrality, a poll conducted by the European Council on Foreign Relations think-tank has showed. Support for Russia is the highest in Slovakia among 14 countries covered by the poll.  (Zuzana Gabrižová,EURACTIV.sk)

V4 backs enlargement. Prime ministers of the Visegrad Four countries adopted a declaration expressing their support for EU enlargement to include the countries of the Western Balkans. The V4 and representatives of the candidate countries met on Wednesday at a summit in Prague.

The Declaration calls for the opening of accession negotiations with North Macedonia and Albania, and expresses an expectation that the membership talks with Montenegro and Serbia will be accelerated during the work of the new Commission. Hungary’s Commissioner-elect has been tasked with overseeing enlargement but will have to get the blessing of the Parliament first. (Ondřej Plevák,EURACTIV.cz, beta.rs,EURACTIV.rs)

Full metal jacket. Slovenian politicians are bickering over the government’s intention to buy armoured vehicles. However, radical left party Levica, which is against NATO membership, opposes the purchase. Slovenia’s minority government depends on Levica votes. Today, a meeting with civilian and military representatives of NATO will take place in Slovenia. (Željko Trkanjec, EURACTIV.hr)

Protest note to Italy. Croatia’s foreign affairs ministry has informed the Italian ambassador that it strongly condemns a monument to Italian fascist Gabriele D’Annunzio, which has been installed in Trieste. Yesterday, two young neo-fascists were apprehended while wearing the flag of the Kingdom of Italy. More on EURACTIV.hr  (Željko Trkanjec, EURACTIV.hr)